A civil society group known as Centre for Reform and Public Advocacy has issued a 48-hour ultimatum to President Muhammadu Buhari and the Inspector General of Police to arrest and prosecute Bola Tinubu, the presidential candidate of the All Progressives Congress (APC) in the 2023 general election for allegedly supplying false information to the Independent National Electoral Commission ( INEC).

According to the group, Tinubu lied in his EC9 form published by INEC when he claimed that he did not attend both primary and secondary school.

The Centre said the submission of Tinubu contradicted earlier claim, particularly the information he gave to the electoral umpire in 1999 in his form CF 001.

Kalu Agu, Legal Adviser of the group, at a press briefing in Abuja on Saturday said that the alleged offence is serious because it breaches both the Constitution and Electoral Laws.

Kalu disclosed that the group is drawing attention to the issue because the police was yet to respond to its petition since June 16, 2022.
“We wrote a petition to the IG on June 16, demanding the prosecution of Tinubu for providing false information on oath in his INEC form CF 001 which he submitted in 1999.

“Since the IG is yet to act on the petition, we are using this press conference to call on the IG to do the needful; he is not above the law, nobody is above the law, Sections 191 and 192 makes it a criminal offence to provide false information on oath.

“We are also calling on President Buhari to direct the IG to arrest and prosecute Tinubu for perjury, it is a very serious issue,” Kalu said.

He threatened that if Buhari and IG failed to do the needful, the group in conjunction with other civil rights groups will approach a court of law for judicial review and order of mandamus to order the IG to do the needful.

According to Kalu, Tinubu had in 1999, claimed to have attended Saint Paul Aroloya Children Home School, Ibadan between 1958 and 1964 and Government College, Ibadan between 1965 and 1969, but turned around in 2022, to say that he never attended any primary or secondary school in his EC9 form.

The civil rights group’s legal adviser, who quoted the ad-hoc report of the Lagos State House of Assembly, which investigated the former governor in 1999, pointed out that Tinubu clearly admitted discrepancies in his academic qualifications.

He said the investigation of Tinubu’s academic qualification was the aftermath of a petition written by a foremost legal luminary and social crusader, the late Gani Fawehinmi, SAN.

Meanwhile, the former Lagos State governor in his submission to INEC indicated that his certificates were stolen by unknown persons while he was on self exile.

Tinubu in his sworn affidavit in support of his nomination form, said he “went on self exile from October 1994 to October 1999 (and) when I returned and discovered that my property including all the documents relating to my qualification and my certificates in respect of paragraph 3 above were looted by unknown persons.”

The APC presidential candidate jumped the information about his primary and secondary education as shown by the list of particulars of candidates for national elections published in the 36 INEC state offices and the Federal Capital Territory (FCT), Abuja.

Tinubu however, stated that he attended University of Chicago between 1972 and 1976 and obtained B.Sc in Economics and a B.Sc in Business and Administration, as well as certificate in Public Account.

Efforts to get the reaction of the Tinubu Campaign Organisation proved abortive as Bayo Onanuga, its director of media and communication, could not respond to messages sent to him at the time of filing this report. 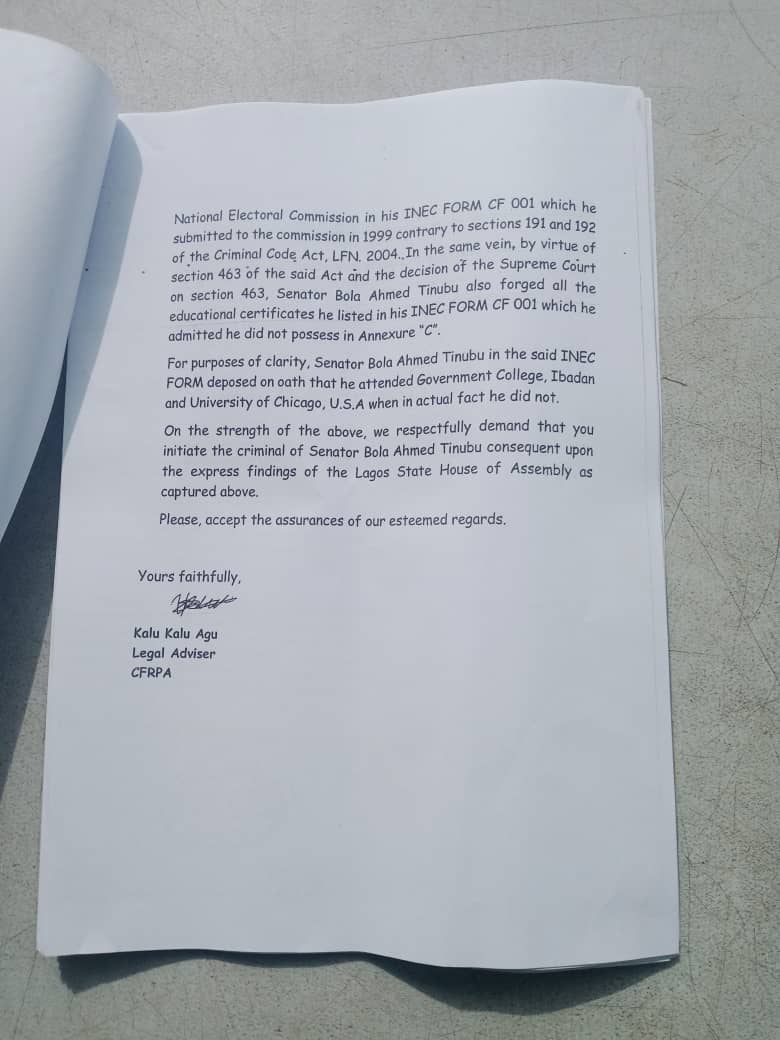 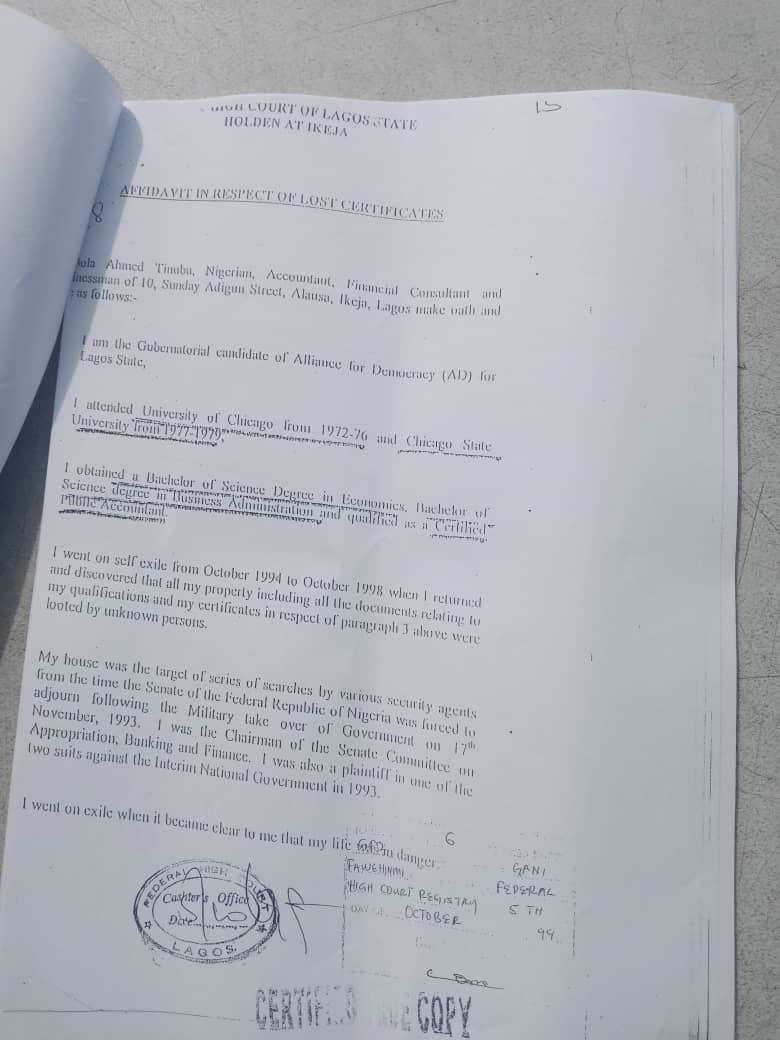 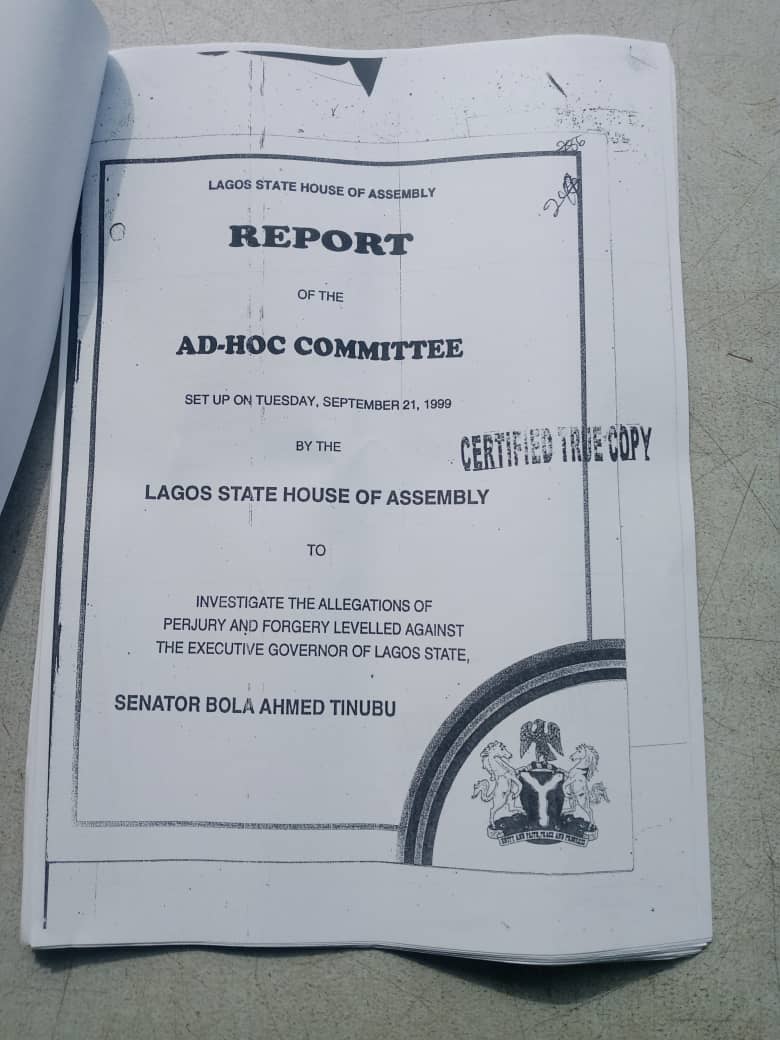 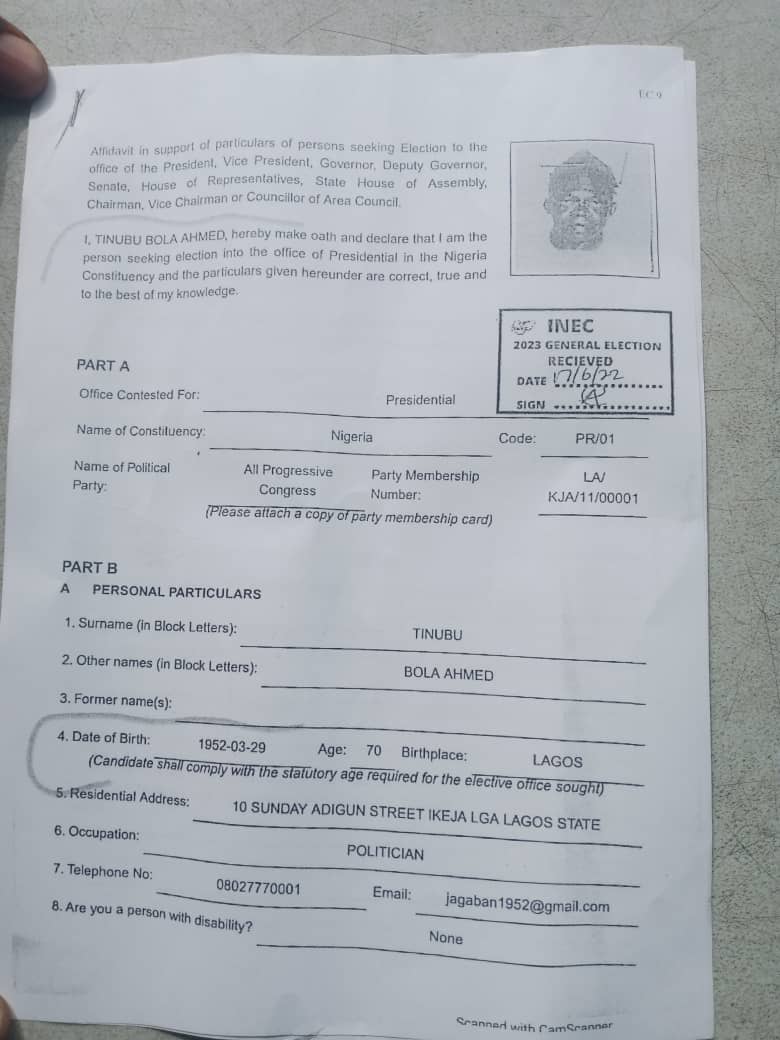 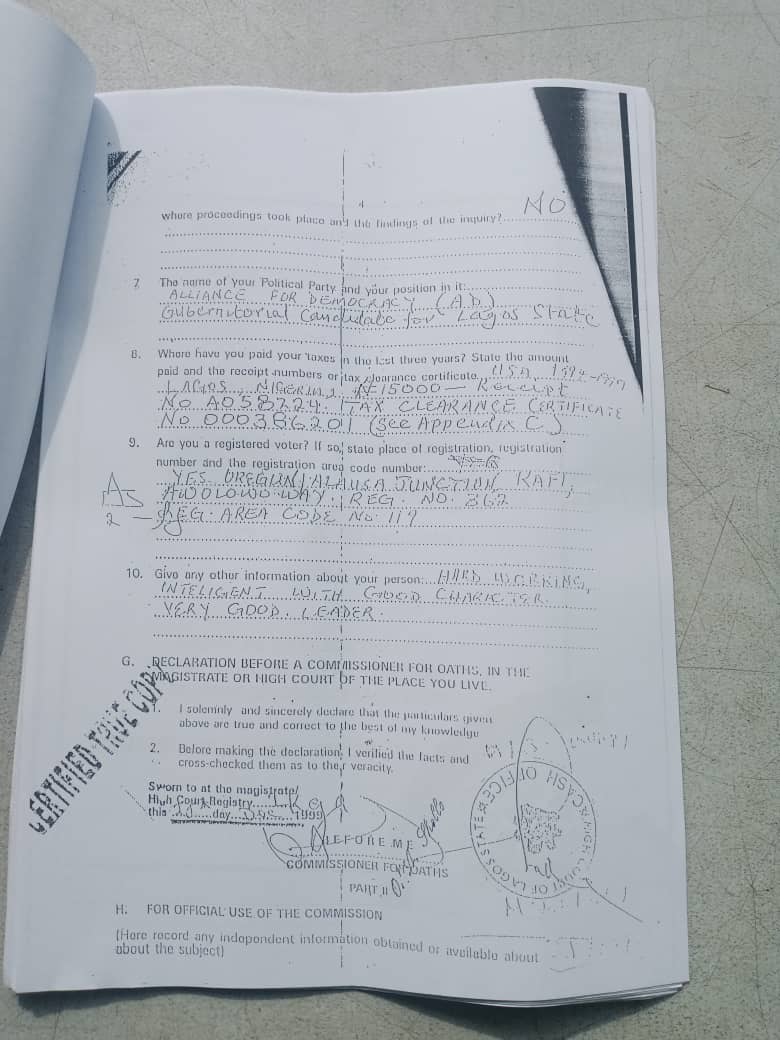 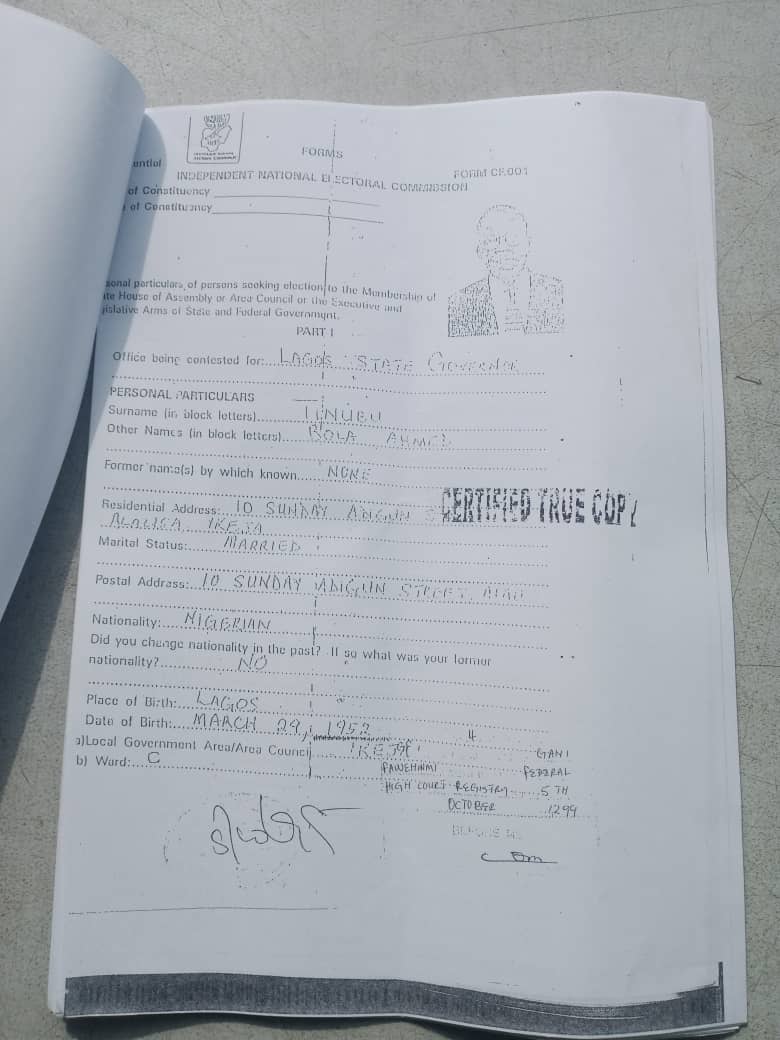 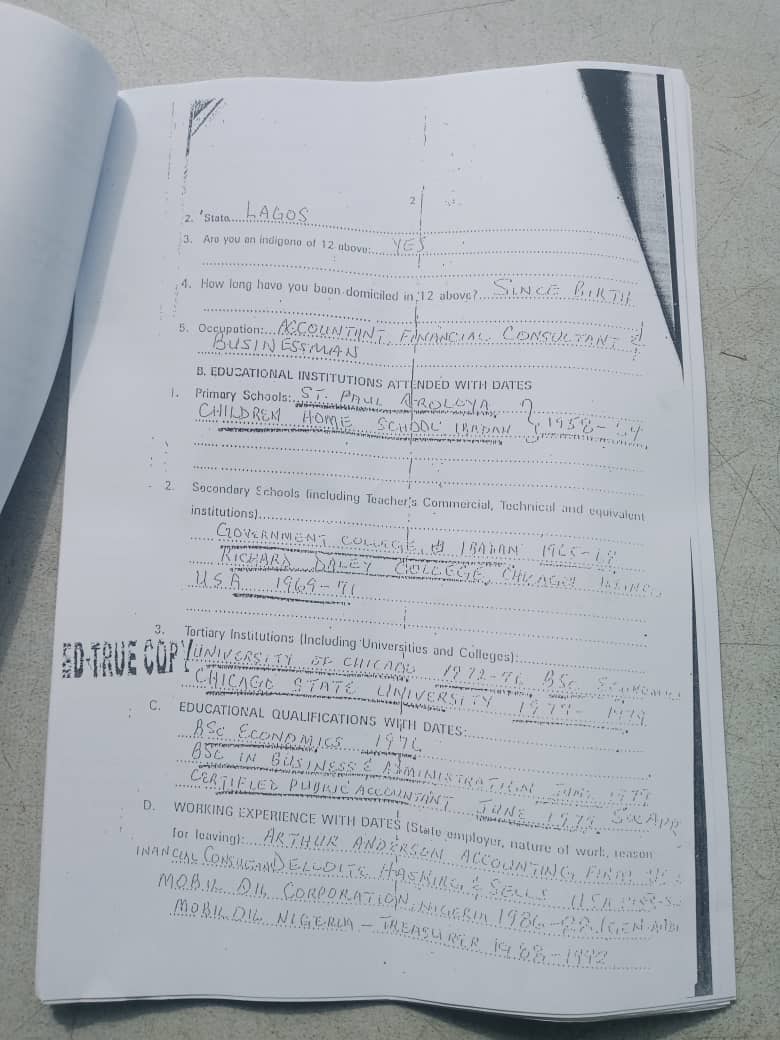 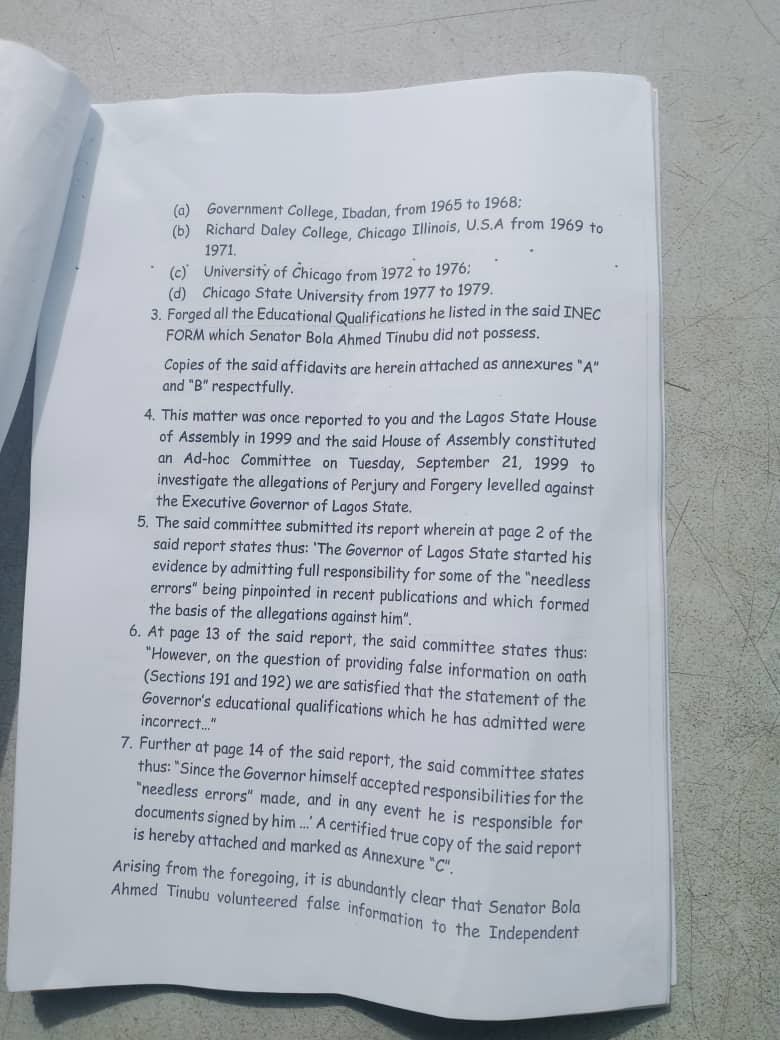 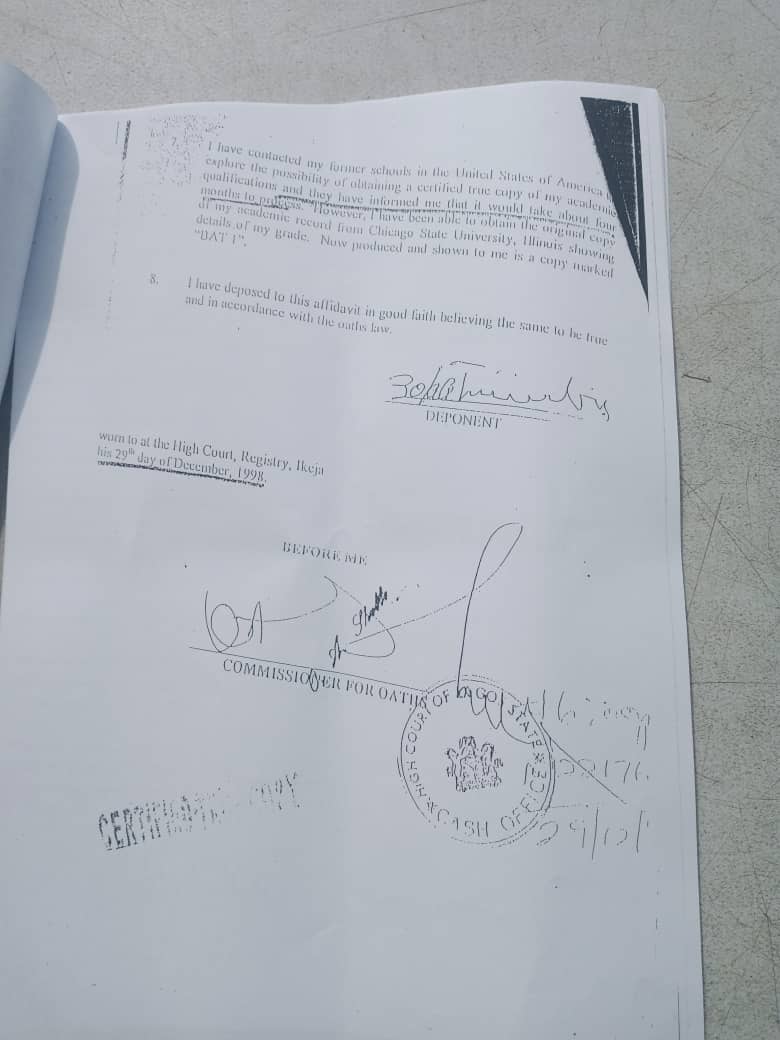