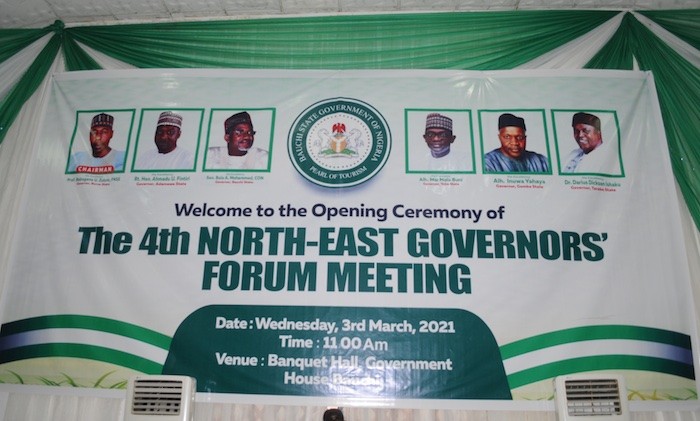 Despite the worsening state of insecurity in Northern Nigeria, which has grossly affected social and economic activities in the last one decade, majority of the governors of the region have always developed cold feet over the idea of a state police.

For whatever reasons, the region’s influential leaders like President Muhammadu Buhari and his political associates have also shown little interest in the idea of state police, just as their opposition to the idea of a wholesale restructuring of the country.

This has been in contrast with governors of the South; especially the South-western states who have always spoken in support for the creation of state police as a way out of the security challenges bedeviling the country.

The South Western governors have even moved ahead to establish the region’s security outfit called Amotekun, despite opposition from Northerners and the federal government.

They have always argued that Nigeria was a federal state, insisting that as chief security officers of their respective states they had a duty to initiate measures to safeguard their indigenes amid the spate of insecurity across Nigeria.

So, the decision of the North-East governors last Wednesday to join their counterparts in the South to demand for state and community police was received with mixed reactions among political watchers.

The governors had recommended the need for community policing and sub-regional outfits to compliment the efforts of the military and other federal security agencies in addressing insecurity.

They were Governors of Adamawa, Taraba, Bauchi, Gombe, Yobe and Borno. The decision was reached at the 4th meeting of the North-East Governors Forum.

Observers say that the decision though late was long overdue in view of the prevailing security situation in the region.

It however, re-enforces their longstanding view that restructuring of the country and state police were the way out Nigeria’s security problem. It has become obvious that the security agencies have been overstretched, need support, while the Federal Government cannot do it alone.

He had in 2018 headed a committee on restructuring at the instance of President Muhammadu Buhari and his party. Although the report has since been submitted with recommendations, implementation has been the major problem.

Many chieftains of the ruling APC have also been clamouring for restructuring. Recall that some South West Leaders of the party had some time ago made some moves to push for the implementation of the party’s official paper on restructuring.

Some of the party’s chieftains, including Bisi Akande, Segun Osoba, Tajudeen Olusi, and Yomi Finnih, had visited the President at the State House to discuss the report of the panel.

They reminded the President that the reports had been endorsed by the APC and the National Executive Council (NEC), urging him to forward the report to the National Assembly.

They had wanted some of the recommendations to form part of the constitutional review being embarked upon by the bicameral legislature. It was their belief that such would help douse ethnic tensions that are rising across the country.

“I am frustrated in my state. Many governors are frustrated in their states too. We are called chief security officers only in name; but we have no control over the coercive instruments of state. We’re all frustrated; we are almost helpless,” he said.

The security situation in the north has escalated within the last one decade due to clashes between farmers and herdsmen, and the murderous activities of the Islamist sect, Boko Haram.

Events have escalated and assumed a frightening dimension within the last five years with assorted violent crimes such as banditry, kidnapping for ransom and armed robbery.

According to the United Nations Office for Coordination of Humanitarian Affairs (UNOCHA), an estimated 640 civilians were killed in the North-East in 2019 in the tenth year of the Boko Haram conflict as a result of fighting between security forces and the insurgents. While in several instances civilians were the primary targets by the terror group.

The organisation further revealed that an estimated 27,000 people, including 37 aid workers, have been killed since the onset of the conflict in 2009.

A recent report by Amnesty International says that more than 1,100 people were killed in rural areas across several states in the North in 2020.

Last week, seven states in the region shut down schools due to increased cases of abduction of school children. Media reports say that about 768 students were abducted by bandits within the last 78 days.

“I believe that collective setbacks can be a breeding ground for us to grow as a nation and move forward. But it is not just bringing solutions; is about having the political will to implement, to make it work.

“So, state police have advantages and disadvantages. The problem for me is the political will by leaders to implement what we want; otherwise it would seem you are just scratching the surface without any result,” Mike Omotosho, former national chairman of the Labour Party, said.

According to him, “Either restructuring, state police- all require political will. We can still be great. We need a leader, who can think, bring ideas to solve our problem, not one that would be looking at election results.”

Omotosho further said that the country was in need of selfless leaders who should be committed to initiating the necessary changes and reforms, and appointment to get it out of the doldrums.

According to him, “Such a leader as president does not necessarily have to be too brilliant but he can bring intelligent people to work with him; bring innovative ideas and change the state of the country and way of doing things.

“Agitations, for whatever, have always been there; the key point is if we want to make change? For instance, we have been making noise about corruption. What have we done about it?

“In Japan, once you are found to be corrupt, you hang yourself. In China, you are killed. In Europe you are convicted. But here we celebrate them and they contest for public office and further enrich themselves.”

Currently, the value of human life has become gravely degraded in the North, especially the North- East. News of violent crimes have become a daily occurrence and hardly scare the citizenry anymore.

As tension continues to rise, observers think the governors have taken a bold step; they stressed that part of the solution lies in each state or region having some form of independent policing to complement the effort of the different security agencies in Nigeria.

They argued that such has become inevitable and would be realised in a matter of time, pointing to the move by different geo-political zones and states to set up security forces, such as Eastern Security Network, Amotekun, Hisbah, among others.

“You know some of these governors, despite the threat they face they still would not say the right thing because they don’t want to offend the man in Abuja. But I think this is a bold statement from them.

“Is it not obvious that the Federal Government has failed in tackling this crisis? The security forces need some form of support. In a normal situation we should not be debating this, because Nigeria is a federal state,” political analyst, Wale Ogunkoya said.

Recently, an advocacy group, South East, South-South Professionals of Nigeria (SESSPN) said that the restructuring of the country holds the key to solving the security challenges in the land.

Speaking to the media, President of the group, Hannibal Uwaifo said until the Federal government identifies the root cause with boldness and sincerity, the fundamental flaws that are so critical in the foundation of the country; the numerous challenges faced by Nigeria can never, and will never be resolved.

“These retrogressive factors are mainly responsible for the intractable security situation we find ourselves in today due to the faulty structure of the nation. Our borders are very porous and manned by corrupt and uncommitted security personnel. Postings are done on ethnic, religious and deceitful quota considerations,” Uwaifo said.

According to SESSPN, “Personnel are posted to what is often referred to as ‘juicy’ areas and positions to raise money for their benefactors by extorting the helpless public and oftentimes, outright stealing of government revenue. The system is unable to respond due to the faulty structure oiled by nepotism, religion, and tribal considerations, leading ultimately to opaque governance, the bane of our society.

“Security challenges persist because the security agencies are uncoordinated; ill-trained personnel are deployed to areas they do not fit in or cannot function maximally due to ethnic, religious and corrupt considerations. The critical intelligence work needed to be done for effective operations or counter-operations are lacking due to non-commitment and criminal negligence.”

However, some stakeholders also say it would be dangerous for regional security groups to carry arms, while warning of its implication.

Speaking to the media recently, Emmanuel Umohinyang, president THE Centre for Leadership and Justice, said regional security outfits in the country were not ripe to bear arms.

Umohinyang said giving arms to the newly formed Amotekun and other non-conventional security could cause havoc to the society.

“We have complained about the Amotekun in the South-West and you have also seen how Amotekun has descended to the arena. They ought to have been a solution but they have become a problem now.

“The same thing is applicable to the South-East. Thank God we opposed the idea by some governors that some of these states’ security outfits should be armed.

“One can only imagine what would have happened now. Even when they are not legally armed, the havoc they have caused with other weapons is there for everyone to see,” Umohinyang said.