Revolution protests: Lawyer insists FG has no knowledge of fundamental workings of democracy 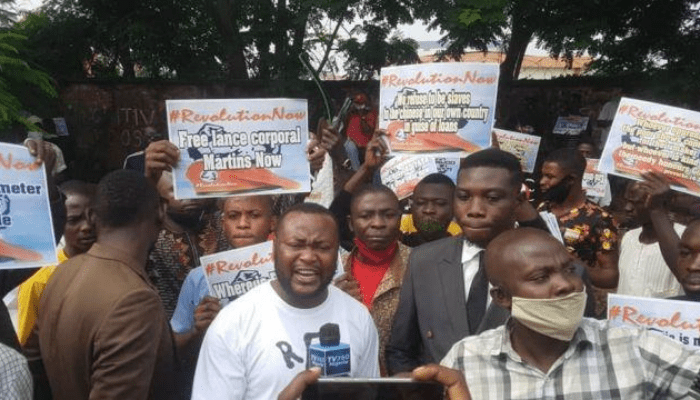 The national president of Revolution Lawyers Forum, Tope Akinyode, has said the Federal Government has no knowledge of the fundamental workings of democracy after it disrupted protesters who spoke up against government’s policies on Wednesday.

Some protesters were arrested on Wednesday after marching out on the street and voicing their views against President Muhammadu Buhari’s anti-graft policy.

Speaking on Channels TV Sunrise Daily, Akinyode said a protest is constitutionally guaranteed right of Nigerians and a constructive way of engaging the government, so it was wrong for the government to arrest and disrupt peaceful protests.

He said the Buhari government is failing and Nigerians have the right to demand the immediate resignation of those in power.

He explained that the demands of the protesters are fundamental demands which include provision of employment, provision of security and payment of N30,000 minimum wage.

However, Femi Adesina, special adviser on Media and Publicity to the president, who also spoke on Channels TV Sunrise Daily, described the protest as child’s play.

Adesina said in a country of 200 million people and a sprinkle come out to protest, it only shows it is not a revolution movement but simply an irritation.

He insisted that it was wrong for the protesters to be talking down on the government because the government is trying its best to address the issues that, in any case, are not peculiar to Nigeria.

“Almost all countries are facing these issues. These issues are peculiar to various countries in the world. If the government is trying its best to address these issues and some people are causing distractions, then they are also contributing to the problems,” Adesina said.

He said the government has been engaging the youths and will continue to do that, adding that the government is investing hugely in youth development through the youth bank and MPower programme.