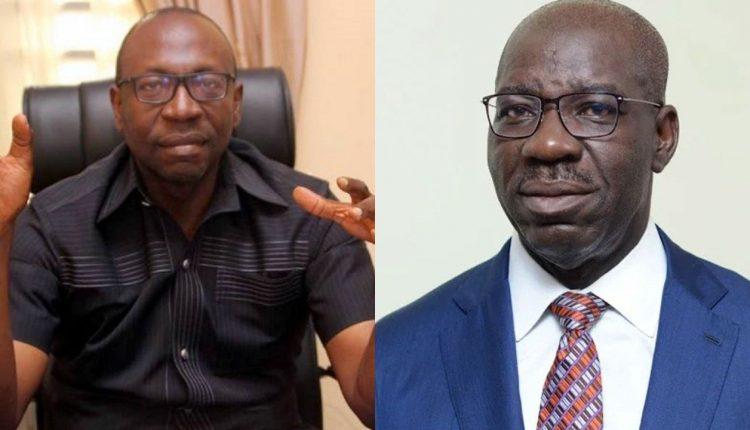 The second term bid of Governor Godwin Obaseki, has been characterised by intrigues mainly because of his face-off with his predecessor and erstwhile benefactor, Adams Oshiomhole, who until recently was the national chairman of the ruling All Progressives Congress (APC).

Following his defection from the APC and emergence as the standard bearer of the People’s Democratic Party (PDP) in a dramatic fashion after he was disqualified from contesting the governorship primary election of the APC over allegations of discrepancies in his certificates presented to the party’s governorship election screening committee, the governor is not leaving any stone unturned in his quest to win the September 19 election.

Though the Independent National Electoral Commission (INEC) says there are 14 other candidates in the election, it is however, expected that the contest would be a two-horse battle between the incumbent Obaseki and the candidate of the APC, Osagie Andrew Ize-Iyamu who has the support of Oshiomhole.

But observers are of the view that the face-off between him and the Oshiomhole may have won him public sympathy and supporters who are committed to seeing him win at the poll to shame the overbearing godfather.

Having suffered bruises in recent time, Oshiomhole himself would be out in full force to prove a point to Obaseki and the PDP that he is still a force to reckon with in the state.

However, in the last few years incumbency power has been a factor in winning elections in the country and observers say it would work in Obaseki’s favour.

They however, say that the governor must also beware and be ready to contend with the ‘federal might’ of the APC which has perfected some undemocratic means of winning elections, using the military, police, and other federal agencies to influence election outcomes.

In the last few weeks, there have been endorsements of Obaseki’s candidacy by different groups across the state.

One of such is last Friday’s endorsement by a Coalition of Political Parties (CPP).

The political parties hinged their decision to endorse the re-election bid of the governor on his administration’s performance which they said cut across all sectors of the state, particularly economic development, industrial revolution, workers’ welfare packages, among others.

Collins Oreruan, Edo State chairman of Social Democratic Party (SDP) and CPP, said the 35 political parties in the state have collapsed their structures to massively support the electioneering of the state governor.

“Our support for Godwin Obaseki is total, cohesive, progressives and focused on a better life for the people of Edo State.

“We resolved that instead of acting as individual entities, it will be more effective to support the governor as a block with our existing party structures across the state.

Speaking recently after winning the PDP gubernatorial ticket, Obaseki expressed his readiness to lead the state and provide purposeful leadership for another four years.

“I am committing to you that I will not only lead this party to victory in Edo State, but we will now make sure that this party establishes an example of how states will be run in Africa. So, today, it is with great pleasure that I have come to formally take up my membership of this great party,” he further said.

Obaseki would have people sympathy – analysts

Yemi Makinde, analyst says Governor Obaseki would get re-elected if the election is free and fair because he commands wide support across the state which has increased due to recent events.

“I think the governor would win, though it may not be easy because the other candidate also has a strong followership, looking at what happened in 2016, but the governor has done well and if you go to Edo he loved by the people. He had no choice than to join PDP; if you were in his shoes, what would you do?

“Obaseki would get support also because of recent events; a lot of people want godfather eliminated from our system,” Makinde said.

Also speaking, another political analyst, Mohammed Ibrahim said the Oshiomhole’s factor would work in Obaseki’s favour, stressing that what Oshiomhole has done to Obaseki naturally would make some persons in Edo to vote for the incumbent governor out of pity.

Osagie Ize–Iyamu is not new to the politics of Edo State, having been the chief of staff and Secretary to the Edo State government during the administration of Adams Oshiomhole.

However, he fell-out with Oshiomhole and defected to the People’s Democratic Party (PDP) to contest the 2016 governorship election in which he lost to the incumbent Governor, Godwin Obaseki.

Ironically, he has become a beautiful bride to Oshiomhole, the same man who worked against his election in 2016, due to the well-reported face-off between the former APC national chairman and Obaseki in recent years.

Ize-Iyamu defected to the ruling All Progressives Congress (APC) last year and was granted a waiver to contest the party’s primary in which he won in controversial circumstances.

Observers believe that Oshiomhole influenced his emergence as the APC candidate after the controversial disqualification of Obaseki.

The Edo election is going to be a fierce fight between the federal might and the power of incumbency.

However, the individual capacity of the two leading candidates would also determine how they swing each situation to their favour.

Meanwhile, it is believed in some camps that Ize-Iyamu won the 2016 governorship election in Edo State but was rigged out.

Pundits say he is a force that cannot be underrated due to his massive support among grassroots across the state.

However, one factor that may work against him is the current trial over alleged money laundering by the Economic and Financial Crimes Commission (EFCC).

The APC candidate is standing trial for eight counts of money laundering to the tune of N700m meant to prosecute the 2015 general election.

The EFCC says that Ize-Iyamu and four others, in the said act, violated the provisions of the EFCC Act and the Money Laundering (Prohibition Act).

Presently, his eligibility to stand as a candidate for the election has also been challenged in Court by a political party.

They are urging the Court to disqualify him for the election.

According to him, “The only godfather I have is God. I am sure that is obvious to you. Adams Oshiomhole is the national chairman of the party and I have immense respect for him. And there are other leaders. Adams Oshiomhole was not in Edo today and yet I won the 18 local governments. We have mutual respect for each other and I will not disrespect him because anybody wants to insult him.

“All I want to let you know is that I am well grounded in Edo. People know me; I have lived there all my life and they believe in me. And they want somebody that understands their problems and is able to solve them. I am sincere, focused and I have a clear-cut agenda of what I want to do.

“That is why I am standing and I believe on the basis of that I will win the election overwhelmingly. I don’t need any godfather to win,” Ize-Iyamu said.

Agol Ebun is the candidate for the New Nigeria People’s Party (NNPP) in the September 19 Edo State governorship election.

Though, she has been active in the political circle in Edo State in recent years, she is however, not expected to pose any threat to the two leading candidate incumbent Governor, Godwin Obaseki of the candidate of the People’s Democratic Party (PDP) and Ize-Iyamu of the ruling All Progressives Congress (APC)

Also, the NNPP is a relatively new party which does not command support and wide membership in the state. There is also the doubt if she has the financial strength to compete with the two leading parties in the election.

Analysts say she is likely to step down from the race and support any of the two leading candidates.

However, Agol, is noted to be a human right activist, a grassroots politician, whose followers say is a visionary leader, responsible, creative and a quintessential achiever in business and politics.

The NNPP candidate worked in the office of the Auditor-General of Edo State as a Quality control Manager, Asabatex Delta State and was the former CEO, Eliisabora Enterprises.

She is married with three children.