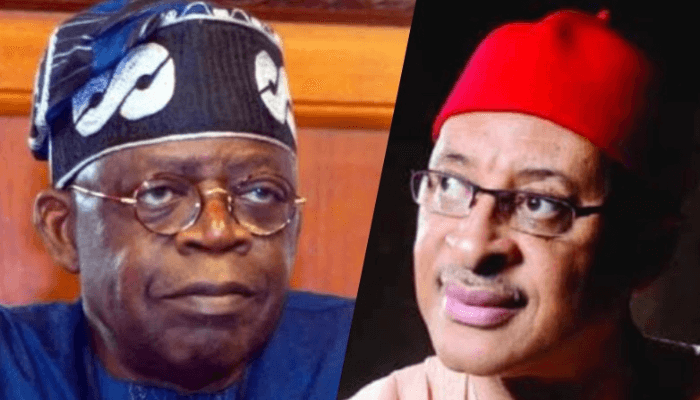 Notable political economist, Pat Utomi has challenged Bola Ahmed Tinubu the Presidential candidate of the ruling All Progressives Congress (APC) to undergo a medical test and make the result public to convince Nigerians that he is capable of ruling the country.

Utomi stated this in an interview on Channels Television programme Monday evening.

The former APC chieftain noted that American Presidents go through a medical check ups and treatments that are made public before they assume office.

“Tinubu is not fit physically you can see that he is ailing. You can see it. Let’s be true to ourselves; let him go through a medical test that would be made public in Nigeria.

Read also: How Tinubu’s presidential ambition will affect us all

“American Presidents go through medicals that are made public, Let him go through a test with Nigerian doctors.”

Tinubu, a former Lagos State governor, had in the past ignored questions about his failing health, insisting that governance is about the brain and not wrestling.

Speaking further, Utomi, who is a strong supporter of Peter Obi, the Labour Party Presidential candidate, said Tinubu should not seek elective office at an old age where physical fitness was a non-negotiable requirement.

According to Utomi, “I don’t think the ambition of Tinubu is for the good of Nigeria. If I was his age, I wouldn’t be seeking political office at his age. Certain things are good for certain times. Why is it his turn? What about other people in Nigeria?”