One sack too many? Suspension of 3 LGA bosses in Rivers by Wike breeds tension, threats

.Recall them in 7 days or… - APC threatens .It is unconstitutional - Human rights group 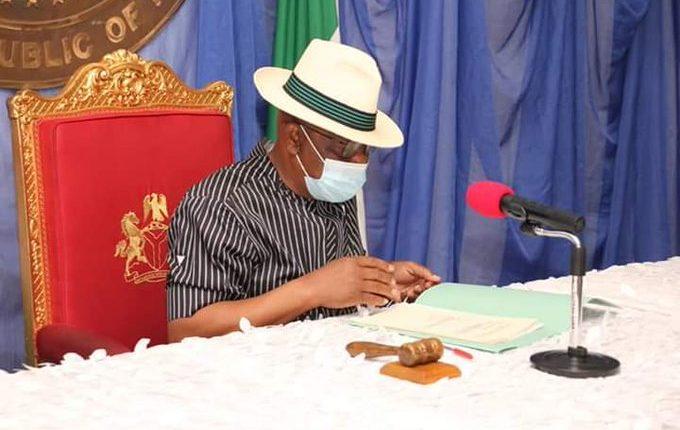 This is because not only has a coalition of human rights groups has declared the action totally unconstitutional, the rival All Progressives Congress (APC) which actually has no single elected or appointed official in the state has given a seven-day ultimatum for the governor to rescind the action.

The statement signed by the information boss in the state, Paulinus Msirim, added: “Similarly, traders at the Ogbum-nu-Abali Fruit Garden Market are hereby directed not to have any dealing with anyone who claims to be acting on behalf of Port Harcourt Local Government Area.

“Government has also removed JAAC Accounts from all the Banks that gave loans to some Local Government Councils without the authorisation of the State Government as provided in the Local Government Law. The Attorney-General and Commissioner for Justice has therefore, been authorised to institute legal action against the defaulting banks.

The APC, in its reaction, has asked that the suspended elected chairmen be restored to their seats within seven days by the Rivers State government. The request was contained in a statement signed by the spokesman, Ogbonna Nwuke.

The party in the statement expressed displeasure over the unilateral decision of Governor Wike to suspend the chairmen outside the dictates of the Nigerian constitution and in-spite of the Supreme Court decision.

It stated that there was no section of the constitution, which allows the executive arm of government in any state or a state governor as head of the executive to punish elected officials without referring perceived acts of misdemeanour against the officials at the third tier level to the House of Assembly, which has the oversight power.

The statement opined that what the governor has done tantamount to hijacking the responsibility preserved for the state legislature under the constitution, pointing out that the Rivers State House of Assembly, which has the power of oversight has not sat to deliberate on the matter. The statement recalled that the House only considered matters related to some appointments pertaining to the state Judicial Service Commission.

The APC said where the elected representatives err; the constitution allows a process of recall which makes it mandatory for two thirds of the electorate to order the return of their representatives, adding that the same constitution prescribes an impeachment of chairmen by councillors who constitute the Legislative arm at the local government level.

It further said there was no proof that councillors in the affected LGAs either complained or played their statutory roles before the government’s action.

The statement reminded the governor that the Supreme Court had ruled that it was illegal for any government in the country to set aside the mandate of elected councils, pointing out that the state government has acted in breach of this landmark decision.

In its own reaction, the Rivers Civil Society Organisations (CSOs) said it disagreed with those who said the Rivers State House of Assembly were the ones to remove a local council chairman.

After quoting authorities, the activists led by Enefaa Georgewill said the action of the governor in purporting to sack or suspend the chairmen was a gross usurpation of powers, an exercise in futility, gross violation of laws, and null and void that should be rescinded to preserve democracy respect for the rule of law.

“It’s our argument, that any State law, empowering the governor or House of Assembly to do otherwise is running contrary to the 1999 Constitution and to that extent unconstitutional. Even though, the Constitution empowers the State Assembly to make certain law in the administration of the Local Government, such a law must not conflict with the express provision of the constitution,” it explained.