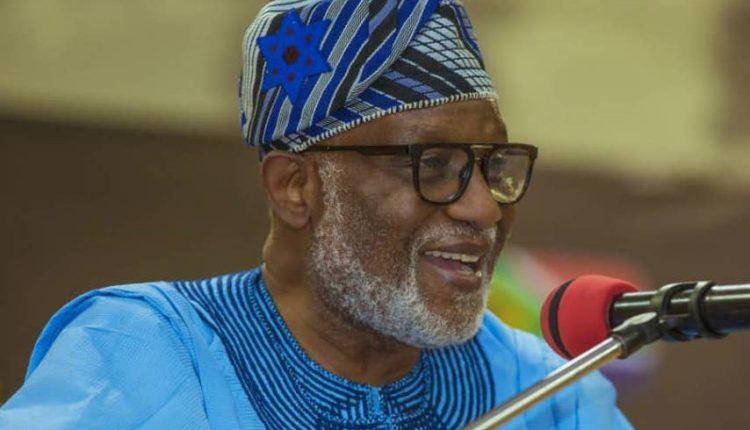 With the recent visit of Governor Oluwarotimi Akeredolu to President Muhammadu Buhari to lobby for second term ticket ahead of the October 10, 2020 governorship election in Ondo State, political fortune may likely smile on him to clinch the ticket of the ruling All Progressives Congress (APC) which is being eyed by many other aspirants.

Recall that Governor Akeredolu on Monday ran to the President seeking his support and endorsement in order to continue his administration for another four years in spite of armies of opposition groups within the party trying to send him out of Alagbaka Government House in Akure.

While other aspirants within the APC and other opposition parties are saying no to the incumbent governor, his loyalists are optimistic that he would surmount all political hurdles to win victory.

Besides, the so-called ‘Unity Forum’, a group within the APC that consists of arch political adversaries to Akeredolu, according to views of citizens, has failed the good people of Ondo State in their bid to present a credible, reliable and trustworthy candidate that will confront Akeredolu at the poll and wins hands down.
As said by many political readers, the failure of Unity Forum to successfully present a consensus candidate may likely give the incumbent governor an opportunity to fly his reelection bid in good colour.

It became more dramatic on 14th of last month, the Unity Forum announced Olusola Oke as its candidate to face the incumbent governor, Akeredolu for the party’s governorship primary in the state.

The announcement by its Leader, Ali Olanusi, a former Deputy Governor and Board of Trustee (BoT) member of the party, irked other nine aspirants jostling to emerge as the consensus candidate of the group.
All the 10 Aspirants are, Segun Abraham, Olarewaju Kazeem, Bukola Adetula, Dapo Adelegan, Adelami Olayide Owolabi, Akintunde Akinsewa Awodeyi, Jumoke Anifowose, Chief Olusola Oke, Ife Oyedele and Jimmy Odimayo.

Also, the pioneer state chairman of the party, Isaac Kekemeke, is in the race, but he ditched the Unity Forum on the grounds that the group may likely collapse due to some undemocratic tendencies of some leaders and members.

However, the Secretary to the selection committee, Sola Ehindero, without mincing words, faulted Olanusi’s report on announcing Oke as the candidate of the group, describing it as fake.

Since Olanusi declared Oke, who contested with nine other aspirants as Unity Forum’s candidate, each of the other nine aspirants has defied the unity of the group and decided to contest no matter how is it.
While another indication has shown that the incumbent governor is now moving from one place to another within the state and outside to beg and persuade those that he might have offended one way or the other so that it wouldn’t be a stone of delay on him at the poll.

On the platform of the People’s Democratic Party (PDP), as said by many political observers, Eyitayo Jegede may likely clinch the ticket of the party.

Jegede, a Senior Advocate of Nigeria (SAN), is seen as only formidable aspirant in the party, remains committed and anxiously awaits the October 10 gubernatorial poll since he lost in the last 2016 governorship election in the state.

Also, in the race is the founder of the Achiever University Owo, Bode Ayorinde. Ayorinde was a House of Representatives member between 2015 and 2019 on the platform of the All Progressives Congress but ditched the party ahead of 2019 general election when he lost APC return ticket to Timilehin Adelegbe, prompting his defection to the People’s Democratic Party (PDP).

But, the political permutations on ground seem to be in favour of Ayorinde since the former National Assembly member is from Owo, the local government of incumbent Akeredolu and he is expected to deploy his influence to garner large number of votes for PDP and by so doing he might be given a House of Representatives return ticket in PDP or be given a Senatorial slot.

Besides, it was gathered that the former Vice President, Atiku Abubakar is set again to support Jedege’s candidature, his personal lawyer, to win the election as he did in the last 2016 governorship election before APC eventually won the poll.

Although, there are agitations concerning the rotation of the governorship ticket of the PDP in which some members are arguing that the ticket should be moved to the Southern region of the state which may not favour Jegede.

At least, over seven aspirants in the contest under the opposition party are from the South and have begun some consultations among themselves to ensure they raise a sole aspirant from the region to battle in the race.

Also, the speculations that the Deputy Governor of the State, Agboola Ajayi, who is no longer on the same page with his boss, Akeredolu,  is planning to defect to the PDP, has rattled the aspirants in the party, considering his political clout.

Jegede, who was at the PDP Secretariat alongside his supporters, said the main opposition party is united to unseat the APC government being led by Governor Akeredolu.

He said that Akeredolu had not been able to leave to up the expectations of the people of the state in the last three years in government, hence the need to change the leadership baton for more purposely governance.

Voting commences in Edo as octogenarian predicts victory for Obaseki