...as Fayose asks Nigerians to watch out for OBJ's end 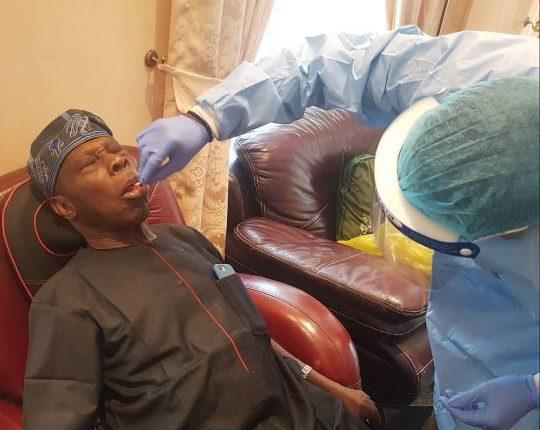 Share
Special Assistant to former President Olusegun Obasanjo, Kehinde Akinyemi, on Sunday said that his principal is free of coronavirus infection and is therefore hale and hearty.
Akinyemi said that COVID-19 test was conducted on Obasanjo by Olukunle Oluwasemowo, a physician from the Molecular Genetics Laboratory – 54gene, Lagos and the samples of the COVID-19 test returned negative on Sunday.
In a press statement issued in Abeokuta, Ogun State, on Sunday, Akinyemi said the Molecular Genetics Laboratory – 54gene, Lagos is one of the accredited laboratories approved by the Nigeria Centre for Disease Control (NCDC) to conduct COVID-19 tests on both symptomatic and asymptomatic Nigerians.

This is coming barely hours after former Governor Ayodele Fayose of Ekiti State took to his Twitter handle, @GovAyoFayose, to condemn the condolence letter which the former president addressed to Governor Dapo Abiodun of Ogun State to mourn late Buruji Kashamu who died of complications of COVID-19 on Saturday.
Obasanjo had said in the condolence letter that Kashamu might have manoeuvred his way from being extradited to the United States for alleged drug trafficking he was said to have committed in 1998, but could not run away from cold hand of death.
The statement infuriated ex-Governor Fayose, who subsequently condemned Obasanjo for mocking the dead.
Fayose said on Twitter that nobody, including Obasanjo, knows how the end will be and it was improper for the former president to mock the dead no matter what he might have done wrong.
“Nigerians will watch out for Obasanjo’s own end. He should stop forming saint because he is not. He should remember that his own end will come too and nobody knows how the end will be,” Fayose said.
BusinessDay reports that former President Obasanjo had taken COVID-19 test last Friday at his Pent House Residence within the Olusegun Obasanjo Presidential Library (OOPL) at Oke-Mosan in Abeokuta.
Share