Young Nigerians are losing their voice in a tainted democracy

I told some old friends from King’s College that I wanted to protest the negative impact of the Twitter ban on small businesses at the Lekki Tollgate and needed company. We were going to take a simplistic view of how the restriction was stifling the multitude of businesses that use Twitter as a means of constant communication with old and new customers. It was unacceptable for the government to act this way, not caring about the economic consequences.

I referenced data from Netblocks, an online service that publishes estimates of the economic cost of internet disruptions around the world. Netblocks had put the cost of the ban to Nigeria at N90.7 million ($250,600) per hour. I gave several analogies to buttress how the cost was mainly shouldered by private businesses and not President Muhammadu Buhari who ordered the ban because his ego was bruised by the microblogging platform’s treatment of his tweet. If these private businesses who had all been shut out of Twitter had a say, would the majority sign up for the ban?

My friends cut me short at this point.

While they agreed we would be protesting for a good cause, they urged caution, citing the way the government had violently quashed protests against police brutality last year after armed military men shot at peaceful protesters and killed some of them. Drawing from that experience they urged me to say nothing. They didn’t have to remind me about the events of October 20, 2020. I had also not forgotten the shameful incident for which not a single person has been tried eight months after. I actually had something else up my sleeves. I was carrying out a test of what democracy meant to young Nigerians and there I got my answer.

Democracy is about freedom. Freedom of speech, expression, association etc, and is also about holding the government accountable. When people are so afraid to speak for the fear of being brutally silenced, what does it say about democracy in such a country?
Of course, we shouldn’t define Nigeria’s democracy by the events of just one year. Our democracy has indeed grown leaps and bounds since the military era, but it is now fast deteriorating.

There’s been a global hit
Globally, democracy actually took a hit in 2020.
The average regional scores in The Economist Intelligence Unit’s Democracy Index worsened in every single region of the world in 2020 for the first time since 2010.

The average global score in 2020 fell to 5.37 (on a scale of 0-10) from 5.44 in 2019, driven by regressions across all regions, and especially large ones in Sub-Saharan Africa and the Middle East and North Africa.
A decade ago the cause of a similar democratic recession was disaffection with governments and a collapse of trust in institutions following the global economic and financial crisis.

By contrast, the 2020 worldwide democratic regression was largely the result of the measures taken by governments to address the public health emergency caused by the novel coronavirus (Covid-19) pandemic, which has entailed the suspension of the civil liberties of entire populations for prolonged periods. Across the world in 2020, citizens experienced the biggest rollback of individual freedoms ever undertaken by governments during peacetime (and perhaps even in wartime). The willing surrender of fundamental freedoms by millions of people was perhaps one of the most remarkable occurrences in an extraordinary year.

The main policy response of governments to the pandemic, whether they were authoritarian or democratic, was to impose social distancing, quarantines and lockdown measures of greater or lesser severity and of longer or shorter duration. By the end of 2020, many Western countries were entering their third lockdowns as cases of the coronavirus surged again as a result of the spread of new, more infectious strains. Only one year before, when the Chinese authorities locked down the city of Wuhan in Hubei province in central China, the rest of the world looked on incredulously, and people said that it could “never happen here”.

Yet within months, countries around the world were following the Chinese template of lockdowns, albeit without employing the same repressive techniques as China to contain what had by then become a global pandemic. Political and cultural differences—and, in some cases, an initial belief that the pandemic was a hoax—led some democracies to resist the policy of lockdowns. 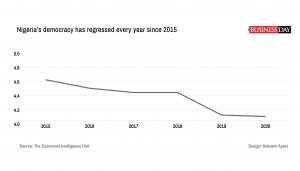 In the US in particular, a strong culture of anti-statism and commitment to individual rights resulted in high levels of popular resistance to the public health measures taken by state authorities to contain the spread of the coronavirus. Yet these were differences mainly of degree rather than substance, and social distancing and lockdowns became the standard approach to dealing with the public health emergency across the developed world. In many emerging markets and poorer countries, lockdowns tended to be shorter (but more coercive) and social distancing less restrictive, given the dependence of so many on the informal economy and the state’s inability to provide a social safety net for long, if at all.

Across the world, the pandemic led governments to take away their citizens’ freedoms and suspend civil liberties. Freedom of movement was taken away as a result of border closures, international travel bans, and restrictions on domestic travel and the use of public transport. Governments invoked emergency powers or imposed states of emergency; dispensed with parliamentary oversight and checks and balances; introduced compulsory social distancing, lockdowns, curfews and mask-wearing; confined people to their homes, except for limited activities; closed educational and cultural establishments; cancelled or postponed elections; prohibited public protests; censured dissenting voices and curtailed freedom of expression, and used the full force of the law to punish those who disobeyed. This list may sound dystopian, yet this was the experience of most people in 2020.

The unprecedented suspension of individual freedoms, at least in countries where liberty prevailed before the pandemic, accounts for the sharp democratic regression recorded in the 2020 Democracy Index. Government restrictions on citizens’ civil liberties led to scoring downgrades for several Democracy Index questions for almost every country in the world.

Nigeria’s democracy suffers under Buhari
Nigeria’s democracy index score declined to 4.10 in 2020 from 4.12 in 2019. In 2015, when the Buhari government was first appointed, the score was 4.62 which means the country saw a 10 percent slump between 2015 and 2020. So Nigeria’s deterioration did not start last year, it’s been on for the entire duration of the Buhari administration.
It is ironic that Nigeria’s democracy is seemingly rescinding under the watch of Buhari who rode the coattails of a vibrant democracy to mount a sweeping defeat of an incumbent president, the first time it had ever happened in the country’s history of democratic rule.

His victory was the result of rife discontent among Nigerians about the previous government.

Buhari has however now become a threat to the same vibrant democracy that brought him into power whether it’s in the form of sanctioning the use of aggressive force against peaceful protesters or the recent Twitter ban for all Nigerians. His entire administration is tainted with violation of court orders, arrest of journalists and other anti-democratic actions.

There was the crackdown on Omoyele Sowore, a journalist and publisher of Sahara Reporters who tried to lead national protests against Buhari’s administration on the grounds of rising insecurity and corruption, even as there is the case of the leader of the Islamic Movement in Nigeria, Ibrahim El-Zakzaky and his wife Zeenat who on June 9 clocked 2000 days in illegal detention.

As far back as December 2016, a Federal High Court in Abuja had ordered El-Zakzaky and his wife released from detention, citing that the continued detention violates their rights and is against Section 35(1) of the constitution which provided “every person shall be entitled to his personal liberty and no person shall be deprived of such liberty…in accordance with a procedure by law.”

But the Nigerian government has continued to detain them using the exemption provided in Section 35 (1)(c), that an individual can be detained “…upon reasonable suspicion of his having committed a criminal offence.” It doesn’t matter if El-Zakzaky’s continued detention is against the other provisions of the constitution.

This is what Nigeria has become, civic rights are no longer guaranteed. It is why Nigerians are now afraid to hold the government accountable through protests. Unfortunately, the pain of that forced silence is being borne by Nigerians whose misery is worsening.

In his six years as president, Nigerians have grown poorer each year, with the economy failing to expand at a fast enough pace to provide opportunities for a bulging population. Jobs are scarce and unemployment is the second highest globally at 33 percent in 2020. Nearly 14 million young people are out of work in Nigeria, which has one of the largest youth population, with more than a third of its 200 million people aged 24 or under according to United Nations data. Unattractive government policies and a difficult business environment won’t let private capital come in droves to create jobs while the few investors within the country are being suffocated to death and the few jobs available are lost.

The lack of jobs for its teeming youth population is fanning insecurity and the worst may be yet to come for a country that is projected by the United Nations to be the third most populous nation in the world by 2050- with 400 million people, double of the current population.

The deafening silence of Nigerians amid the country’s economic realities should be an indictment of its democracy, but it doesn’t seem to be, at least not yet.