Edo Guber: APC yet to comply with Edo Covid-19 guidelines

---as IG drafts officers from Delta, Bayelsa for the primary election 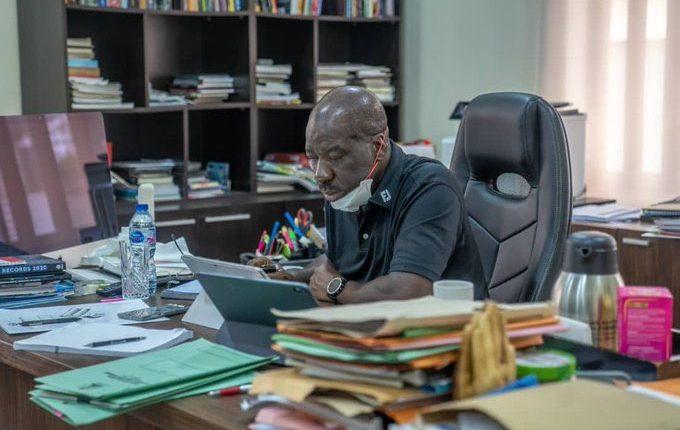 Edo state governor, Godwin Obaseki, on Sunday said the All Progressives Congress (APC) is yet to inform the government of its preparedness to comply with the state’s COVID-19 guidelines in the conduct of its governorship primary election.

The governor had earlier gazetted supplementary regulations on political gatherings during the pandemic, particularly for the conduct of party’s governorship primary elections.

The governor’s statement issued by his Special Adviser on media and communication strategy, Crusoe Osagie, said APC appears resolved to carry on with the conduct of its primary election in violation of the Edo State COVID-19 Quarantine Regulations and the state Government’s Gazette on political gatherings in a pandemic.

He also alleged that the APC had imported thugs into the state prior to the its primary and the governorship election slated for September 19.

“The Edo State government is calling on all political parties holding primary elections to restrict themselves to conducting their activities within the protocols and regulations provided for in the Edo State Coronavirus Quarantine Regulations and the Government’s Gazette on political gatherings during this pandemic.

“These guidelines were issued in fulfillment of government’s statutory duty to ensure the protection of lives and property in the state, in the wake of COVID-19 pandemic.

“However, we note with concern that all the political parties conducting primary elections in Edo State have notified the government of their readiness to comply with the extant laws and COVID-19 regulations, except the All Progressives Congress.

“We also have it on good authority that these persons have imported thugs into the state to actualise this illegality, further threatening the peace and security of our dear state”,he said.

He, however, added that the Edo State government would spare no expense in upholding the law and protecting the lives of her people.

He said, government will ensure that it identifies and prosecutes anyone who engages in the illegality and their collaborators, should they proceed with the unlawful conduct.

Meanwhile, the Edo State Police Command said it is on top of the situation for the APC primary coming up tomorrow.

The command image maker, Chidi Nwanbuzor, who spoke on phone to newsmen said the state commissioner of police, Babatunde Johnson Kokumo, has made adequate security arraignment for the exercise.

According to him, following the commissioners request,
the Inspector General of Police, Muhammed Abubakar, has drafted police Mobile Force from Delta and Bayelsa to Edo state.

Nwabuzor said the Mobile Police Force will arrived the state on Sunday, June 21.

“Also, tactical team of the command, men and officers of state CID, State Bureau of Inverson and Area Commander, DPO among others are eually ready to execute this task in protecting life and property of APC members and the good people of Edo state.

“Talking about COVID-19 protocol, the police is working together with other sister-security agents, including Nigeria Army, Airforce, Directorate of State Service (DSS), Nigeria Security and Civil Defence Corps (NSCDC), Nieria Custom Service, Nigeria Correctional Sservice and NDLEA to ensure the people observe the restrictions,” he added.

Replicating successes in telecom, others in key sectors