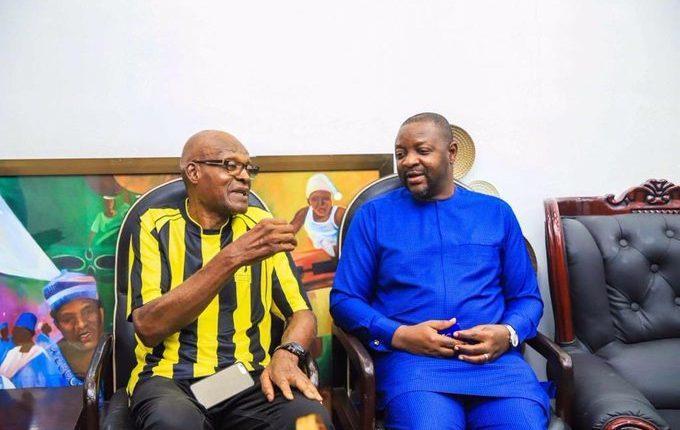 The Minister of Youth and Sports Development, Sunday Dare on Saturday urged stakeholders in Oyo State Chapter of All Progressives Congress (APC) to drop any perceived differences and work together for the party’s success.

While asking them to go beyond the setbacks and disappointments they had experienced in the past, Dare stressed that the stakeholders must act with greater cohesion and strength of purpose.

The Minister, during an interactive session with party leaders in the state in Ibadan, said that the APC government has a track record of achievement that the state has never experienced before irrespective of what is said to the contrary.

“Despite the extraordinary events that have beset us in the intervening months and perhaps because of these subsequent new challenges, the call to unity and for reconciliation remains our great imperative. The APC in Oyo state can only progress if we pull together. Disunity is just another way of defeat. We fight against each other at our own collective peril. Ambition is part of the body of politics.

“However, unbridled ambition serves only to tear that body down. Undue ambition and resultant fractiousness will cause us to collapse the very thing we seek to build.   The current tendency of trying to build individual nests and of running various political plots and schemes will fail to achieve what is sought. These things will only cloud and fog the air so much that none of us will be able to see our way through.

“Not only will the party be impaired. Many of our individual objectives will be dashed also because the state chapter of the party will lack the strength and cohesion to carry us through to the needed ends and to the desired victories. There are many excellent and illustrious people in our state party. With this pedigree of members, we should not know the uncertain condition in which we now find ourselves.

“Part of the problem is due to the high quality, high octane membership we have.  People of such talent and experience are unjustly denied due respect and consideration in party deliberations and decisions. However, some of our members have crossed the subtle line between commanding due respect as opposed to seeking to take undue command of the party.

“They have done so perhaps innocently and without being fully conscious of what they were doing and that it was alienating other vital members and tearing at the fabric of internal unity. In the sincere attempt to make the party what it should be they inadvertently stepped across this critical boundary. We need to take a step back and repair the damage this process has caused.

“The notion of entitlement or personal ownership of the Oyo APC will keep the party stuck as if caught in wet cement. No one of us owns the party. We all do. The party is an institution of collective membership but also collective ownership.

According to him,  the only banner we should raise is the APC banner. Any idea that some informal and nebulous sub-faction should rule and is more important than the party itself must be tossed out the window. To exalt some small group over the larger is against the democratic spirit of the party and it will fate us all to a troublesome and adverse future.

“Either you are an APC member or you or not. There are no conditions or caveats that govern us. The different political tendencies in the party must now discard their adversarial colorations so that we may coalesce and strengthen the party. Currently, Oyo APC is less than the sum of its individual parts. We must reform how we interact so that the party becomes greater than the sum of those individual parts.

“We know what the organizational hierarchy should be within the party. Attempts to usurp or ignore the democratic spirit and letter of our party constitution and established norms will fail.

“APC Oyo is beyond the Ibadan crowd or Ogbomoso crowd or Oke Ogun crowd or any crowd for that matter. Together we win. Separate and tendentious we lose.

The APC State Executive must embrace a new more inclusive and collegial mentality else they drive the party aground. The fragmentation of the party and the unfair treatment of members associated with a rival faction must stop. A party does not become strong by crushing internal opposition, it becomes strong by reconciling it. And only a strong unified party will win the majority of elections it faces. The idea of handing the party over to a few individuals to the detriment of others will spell doom. You might win the battle for supremacy in the party but may well lose the greater war which is the general elections.

“Unless we bind our wounds and rebuild, we will lose respect and focus as a party. This will allow a lesser party to take the victories and the chance to govern this beloved state that should rightfully be with us,” the Minister urged.