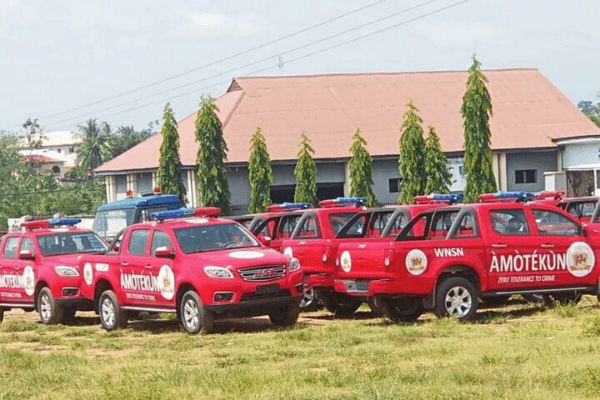 Prominent Nigerians and senior lawyers have expressed divergent views on the legality or otherwise of the South-west regional security outfit ‘ Amotekun’ banned Tuesday by the Federal Government through a letter by Attorney-general of the Federation and Minister of Justice, Abubakar Malami.

The six state governors had constituted the outfit to tackle the challenges of insecurity, including kidnapping and banditry in the region.

But the initiative has attracted criticism and condemnation from some section of the country, especially some leaders in the North, who say such arrangement was unconstitutional in a federal state and called for its scrapping.

In a statement Tuesday night, the Federal Government declared the paramilitary outfit as illegal; the government said it was not backed by any known law in the land.

While challenging Malami to declare Hisbah Corps, (a religious police force responsible for the enforcement of Sharia) and Civilian Joint Task Force among others in the Northeast illegal, said: “He is talking arrant nonsense.”

According to him, let him declare Hisbah police in the 10 Northern states illegal and also let him declare the Civilian Joint Task Force in the Northeast, those are not Nigerian police institutions and they are not Nigerian security institutions but they were created because there is a need; urging the governors of the Southwest to go ahead with the implementation of the Amotekun, he noted that it was created because there is a need for it.

Aare Ona Kakanfo of Yorubaland, Gani Adams has written an open letter to Malami, saying: “I find it disturbing your statement of Tuesday, January 14, 2020, declaring the security initiative of South-west governors ‘Amotekun’ as illegal.

“You also threatened that the full course of the law will be applied to anybody promoting the Amotekun security initiative. Maybe you have forgotten. I need to remind you that you are the Attorney-general of the country, not a section of the country.

“So, your outburst against the governors who were elected, not selected or appointed is against the spirit of the 1999 Constitution (as amended). The right to life is universal and no government can legislate against that. I don’t need to bother you about killings, kidnappings, banditry and other criminal vices in the SouthWest recently.

“Even Funke Olakunrin, the daughter of Yoruba leader, Reuben Fasoranti, was killed and nobody has been arrested in respect of all these killings.

“So, nobody is rising against Nigeria, as your letter to the governors, directly or indirectly, implied.

What is happening is that our people no longer feel safe because the land has been invaded by some elements from within and outside the country.

As a lawyer and a Senior Advocate, you should know that you are not the law. You are only the Attorney-general, not a court. It is only a court of competent jurisdiction that will decide if what an individual, group of individuals, an entity or a state does is legal or otherwise. So, it is only a court that can invalidate the South-west joint security initiative, not you. I want to establish this fact that the Yoruba have a right to protect themselves from attack or violence of any sort.”

The Southern and Middle Belt Leaders Forum (SMBLF) said government’s declaration that the security outfit was illegal was an indication of a further evidence of a state-backed injustice in the polity.

Speaking in separate interviews with Businessday, Wednesday, some politicians and senior lawyers said the initiative was not an alternative or rival to the Nigeria Police and not a violation of the law, stressing that it was laudable in view of the security challenges bedeviling the region and the country.

John Baiyesha, a senior advocate of Nigeria (SAN), said the initiative did not violate the constitution because the security outfit was not an alternative to the Nigeria Police.

According to him, “The only thing that the law says you cannot do is that you cannot have regional police, but you can decide to have a vigilance group. Looking at the security of the people to the communal level, for example, look at Hisbah in some states in the North.

“They have it in Kano, Zamfara, Sokoto, and Niger States. They enacted laws to set up even court for such purposes. Nobody talked about it, and then look at the areas where terrorism is high in the North-east.

“They had vigilante Joint Task Force, who are providing security because they know the terrain, they know the area and they can enter the bush.

“The police cannot even enter where they would operate; they enter the buses and make sure that people are not kidnapped and take for ransom. They should even be commended,” Baiyesha said.

Second Republic governor of Kaduna State, Balarabe Musa, described the initiative as illegal which could give rise to anarchy in the country.

“For me ‘ Amotokun’ is illegal; such initiative could give birth to the Wide-wide West which led to the civil war in the First Republic and the leaders could not manage the crisis that arose from it.

“It is the North and South West that are leading the county; if they cannot solve the security challenge of the country, it is a big shame on them,” Balarabe said.

Moshood Salvador, a chieftain of the ruling All Progressives Congress (APC) in Lagos State, who had spoken to Businessday before the Federal Government pronounced the outfit illegal, said that such arrangement was not new in a federal state.

According to him, “In any federal setting you would have all sorts of security arrangement agencies it is just additional to security. The moment they know that this people are protecting the interest of the people in the South-west there would be certain fear.

“Mere hearing about the outfit would put fear in them. I am not surprised about the opposition; even in America, the Republicans are calling the Democrats terrorists’ friends.”

Salvador’s views were, however, countered by Sanni Yabagi, national chairman of Action Democratic Party, who said that the SouthWest governors should have collaborated with the Federal Government on the outfit.

“What they have done is illegal; if you look at the concurrent list, it does not give states powers to set up security outfit that would rival the police. So, where did they get their powers from? I think we need to do things within the law,” Yabagi said.

Where are the political parties?

Buhari felicitates with Oshiomhole at 68

Coronavirus: Oyo state should be given same treatment as Lagos, Ogun – Federal…

Where are the political parties?

Buhari felicitates with Oshiomhole at 68