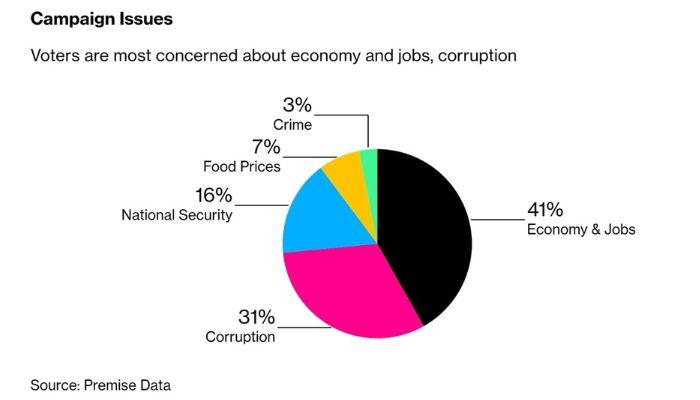 Away from the two most popular parties in Nigeria, a third-party candidate is the top choice to become the next president of Africa’s most populous country, a new opinion poll conducted for Bloomberg, the global television group based in New York has revealed.

A clear majority of respondents said they intend to vote for Peter Obi, a former state governor, in elections scheduled for February. The results of the survey conducted for Bloomberg News by Premise Data Corp. were published on Wednesday as the official campaign to succeed President Muhammadu Buhari kicked off.

Of the 92% of participants who said they’ve decided how to vote, 72% named Obi as their first choice. Of those who are still unsure, 45% said the 61-year-old is their preferred candidate.

The San Francisco-headquartered data company surveyed 3,973 Nigerians from Sept. 5-20. Respondents to the app-based poll were selected from quotas developed by age, gender and location across the country’s six geopolitical zones. Results were then weighted against the original quotas to ensure national representation. About 44% of Nigerians own smartphones, according to the Alliance for Affordable Internet.
The candidates of the two parties that have ruled Nigeria since the restoration of democracy in 1999 fared less well. Bola Tinubu of the ruling All Progressives Congress garnered 16% of decided voters and 23% of those yet to make up their minds. Atiku Abubakar of the main opposition Peoples Democratic Party tallied 9% and 17% respectively.

A former two-term governor of the southeastern Anambra state, Obi is running on the ticket of the Labour Party, which won a single seat in the Senate and House of Representatives in the last election in 2019. The APC and PDP dominate both chambers of parliament.

In a relatively short time, Obi has built up an enthusiastic base known as “Obidients” — initially online, but increasingly in the streets — who aim to cause an upset on Feb. 25. Still, the Labour Party has a much smaller nationwide presence than the two rival parties, which are experienced at turning out voters across the vast West African country. Obi’s supporters will need to rapidly scale up their organizational infrastructure if they’re to capitalize on the campaign’s momentum.

Obi originally sought the PDP’s nomination before withdrawing from a party election that Abubakar, a former vice president and perennial presidential candidate, won in May. Tinubu, who used to govern the commercial hub of Lagos and is the most influential politician in southwestern Nigeria, triumphed by a landslide in the APC’s primaries the following month.

The five-month race to the general elections gets underway as Nigerians contend with soaring inflation, a plunging currency and pervasive insecurity. Production of the economy’s historical mainstay — crude oil — has also slumped to multi-decade lows, while the Buhari administration’s debt service bill in the first quarter of the year exceeded the revenue it was able to earn.

Three-quarters of respondents said that their country is heading in the “wrong direction.” A combined 88% listed the economy and jobs, corruption, and security — three pillars of the campaign that brought Buhari to power in 2015 — as the most important issues facing their communities.