Bayelsa House of Assembly Speaker may be sworn in as Governor 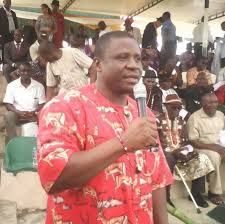 Except something urgent before 12 midnight today, Friday February 14,  the Speaker of Bayelsa State House of Assembly, Monday Obolo may be sworn in as the Acting Governor of Bayelsa to fill the vacuum that will be created by the exit of the outgoing Governor, Seriake Dickson.

This is as the Independent National Electoral Commission (INEC) is still meeting in Abuja to make a final decision on the Bayelsa Governorship Supreme Court judgement which sacked the Bayelsa Governor-elect David Lyon and his Deputy, Biobarakuma Degi-Eremieoyo.

Accordingly, the Apex Court ordered that the certificate of return earlier issued to the Lyon be withdrawn while the candidate who came second in November Bayelsa governorship elections candidate should be declared the winner.

Diri Duoye, the People’s Democratic Party (PDP) governorship candidate came second in the election with 143,172 votes to Lyon’s 352,552 and would have been inaugurated today as the validly elected Governor of Bayelsa based on the Court’s order.

But INEC has not decided whether it would issue a certificate of return to Duoye, as the Commission said it was yet to receive the enrolled order of the Supreme Court.

Sources at the INEC Headquarters had confided in BusinessDay there was a meeting of the Commission yesterday night after which  there would be final decision on the judgement.

However, after the meeting, the Commission was unable to make a decision as the enrolled court order has not been issued it late Thursday night.

An Official of the Commission who did not want to be mentioned disclosed that they are meeting early today and soon as the order reached them, a decision would be immediately taken.

While the INEC decision is being awaited, a Constitutional Lawyer, Johnson Agakutu told BusinessDay that in order to avoid creation of vacuum, the last resort would be the inauguration of the Speaker of the State House of Assembly as Acting Governor.

“Pending the outcome of INEC meeting, the Bayelsa State Chief Judge would before the end of today have the cause to swear-in the Speaker of the House of Assembly as Acting Governor. So there is nothing to worry about vacuum”, he said.

Be My Valentine with OkadaBooks for the Weekend