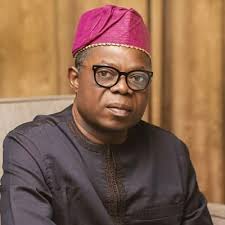 Adelami who disclosed this Wednesday in Abuja shortly after some concerned Ondo State indigenes under the aegis of Ondo Rescue Group picked the expression of interest and nomination forms for him, said he was on a rescue mission to salvage the State.

Addressing journalists after receiving the forms from the group, Adelami noted that: “Ondo State is endowed with a lot of resources. After Lagos, I cannot think of any other State with resources like Ondo State but what has happened over the years, these resources have been under-tapped”.

The former Deputy Clerk of the National Assembly, who commended past leaders in the State, including the incumbent Governor of the State, Oluwarotimi Akeredolu, however, promised to take the state to the higher level of development.

“Other leaders that have come on board at one time or the other have tried their best, even including the Governor that is there. He has tried his best but what I’m saying is that his best is not enough. I want to improve on that best. I want to take Ondo State to a higher level.

“Looking at Ondo State over the years, I know what and what we need to do. If Ondo people give me their mandate I am going to launch out immediately; I am not going to wait for weeks or months before I begin to execute my manifesto.

“For instance, local government autonomy is a burning issue in all the states of the federation and first item on my manifesto, I am going to grant financial autonomy to local governments because I believe that the third tier of government is the government of the grassroots.

Speaking on the mode of election for the July 20  Ondo State Governorship primary, Adelami who endorsed direct primary said: “I believe in transparency and fairness and I believe this can be guaranteed when we have a direct primary. It gives all members the opportunity to have a say on who leads them”.

Presenting the forms to Adelami, the leader of the Ondo Rescue Group, Adewale Ogendegbe said the antecedents of the aspirant informed their decision to raise funds to purchase his nomination forms.