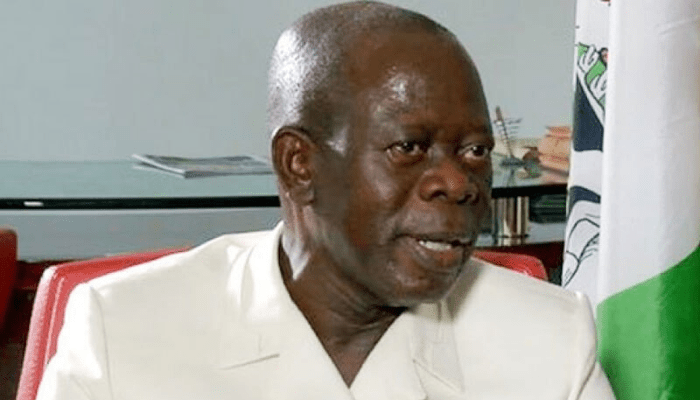 The All Progressives Congress (APC) should invoke the provisions of Article 17 (vi) of the party’s  Constitution to appoint an acting Chairman, pending the settlement of all the cases around the party’s National Chairman, Adams Oshiomhole’s membership, Salihu Lukman, Director-General of Progressives Governors Forum (PGF),  an umbrella body of Governors of the ruling APC,  has declared.

The Federal Court Abuja on Wednesday ordered Oshiomhole to stop parading himself as APC National Chairman following an interlocutory injunction but another Federal High Court in Kano on Thursday upturned the earlier judgment as Oshiomhole continues as the party’s National Chairman.

But Lukman in a statement titled; ‘Injunction against Comrade Adams Oshiomhole: The Big Opportunity for Party Building’ made available to journalists in Abuja on Friday said, APC needed to invoke provisions of Article 17 (vi) which provides that in the event of a vacancy, “the relevant Party organ (NEC) shall appoint another person to act in his place pending ratification by the National Convention or Congress.”

“With the appointment of an Acting National Chairman, the next would be to seek to invoke provisions of Article 25 A(i) of the APC constitution, which stipulate that the “National Convention of the Party shall be held once in Two (2) years at a date, venue and time to be recommended by the National Working Committee and approved by the National Executive Committee subject to the giving of statutory notice to Independent National Electoral Commission and at least fourteen (14) days’ notice given to members eligible to attend.”

“Already, this is the second year since the last Convention in 2018 where Comrade Oshiomhole-led NWC was elected. What this means is that with or without our current challenges we are actually due for a National Convention.

“Once a NEC is convened, all these processes should, therefore, be activated. The other issue is the question of what are the other steps or decisions needed to ensure the emergence a new atmosphere in the party that will promote reconciliation and re-orient the party to regain its political profile as a party commanding mass appeal?

“Part of the requirement may have to include a decision by the NEC to set aside all cases of disciplinary decisions taken by the party organs at different level in the last two years. This is important in order to basically promote a reconciliation based on a strategy to ensure internal harmony”.

The administrator of the APC Governors body, however, said it was important that the Bisi Akande Reconciliation Committee set up by the  Oshiomhole-led NWC is allowed to proceed with its assignment and should be strengthened such that its reports and recommendations are presented for consideration at the National Convention.

According to him, the Committee has already called for a memorandum from APC members which may have been disrupted by the current challenges, adding that any NEC meeting convened to address the problem of leadership arising from the interlocutory injunction against Oshiomhole should review and renew the mandate of the Akande Reconciliation Committee.

“Maybe, as part of the terms of reference of the Chief Bisi Akande Reconciliation Committee, the issue of reviewing processes of candidates’ selection with all the allegations of financial misdeed against the Comrade Oshiomhole-led NWC during the 2019 elections should be included as part of their terms of reference. There is no way we can make progress in our fight against corruption if in the end our NWC is turned into a harbinger for corrupt practices during elections.

“In addition to the Chief Bisi Akande Reconciliation Committee, there is the need to set up a Constitution Review Committee. All the gaps associated with discipline and leadership succession need to be addressed based on either amendment of existing provisions or formulation of new provisions. This is very important in order to ensure that we are developing necessary safeguards against future recurrence of our current challenges,” he added.

While heaping blames of the party’s misfortunes in the 2019 general elections and other off-season elections on Oshiomhole, Lukman said:

“Assuming in all of these, Comrade Oshiomhole remained as the National Chairman and proceed to organise primary elections for Edo, Ondo, and Anambra, how advantageous will that be to APC?

“Let us also assume for the purpose of analysis that undisputed candidates emerge from the primaries in which no one within the party is contesting the results. Whether those undisputed candidates include Governors Godwin Obaseki of Edo State and Mr. Rotimi Akeredolu SAN of Ondo State is immaterial.

“The Zamfara and Bayelsa judicial cloud would appear to have already gathered with any opposition party led by PDP just positioned to harvest what will come with such clouds”.

Amotekun may not succeed except in Lagos, says former Oyo Governor, Alao-Akala

Edo poll guber: Whether direct or indirect primary, I will emerge APC candidate…

Amotekun may not succeed except in Lagos, says former Oyo…