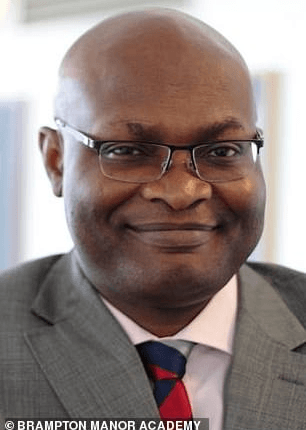 Daniel Olukoshi, a Nigerian executive principal at Brampton Manor Academy, a state school in East London, England made headlines in 2018 after guiding the school to produce the best A-level results.

The school has enjoyed growth and success under his leadership in 2012 and 2018, as the country’s Office for Standards in Education, Children’s Services and Skills (OFSTED) rated the school as outstanding in all categories.

Daniel Olukoshi has accomplished this great feat again in 2022, as 90 percent of its year 13s (430 students) at the academy achieved straight A/A grades in their A-level results. And additionally, 92 out of the 430 students have received admission offers from Oxbridge University.

According to Olukoshi, the school is a very successful institution because it focuses very strongly on what really matters, which is the quality of teaching and learning.

“In 2012 and 2018, Ofsted concluded that our overall effectiveness is outstanding because our student achievement is outstanding, quality of teaching and learning, student behaviour and quality of leadership and management all outstanding,” he said.

Besides, the senior leader stated that students of all ages and abilities make outstanding progress because of the rich curriculum they offer, along with the excellent care, guidance, and support they provide.

“Our school motto ‘success through effort & determination’ underpins all that we do here at the academy and our mission is simple: to ensure that no child is left behind.”

The academy was invited by the British Department for Education to sponsor another local school, (Langdon School) and in January 2014, Brampton Manor multi-academy trust was formed, with Langdon Academy as an integral member of the family.

In 2015, Olukoshi was awarded the Most Excellent Order of the British Empire (OBE) award by Queen Elizabeth II.

The OBE is a British order of chivalry that rewards contributions to the arts and sciences and works with charitable and welfare organisations.

Speaking about the feat of Olukoshi, a Twitter user, @KwamiAdadevoh, tweeted via his handle that Olukoshi is among the kind of people to be consulted for the new Nigeria.

“Congratulations to this class. The brain behind this is another Nigerian. This is the kind of person to be consulted for our new Nigeria. @PeterObi and Datti passion for education can drive this.

@said_hatimy also tweeted that the school’s success is an amazing story.

“Olukoshi is an amazing man. He was my chemistry teacher at Seven Kings High School back in the day, and even then he converted the chemistry department to be the highest achieving in the whole school.”