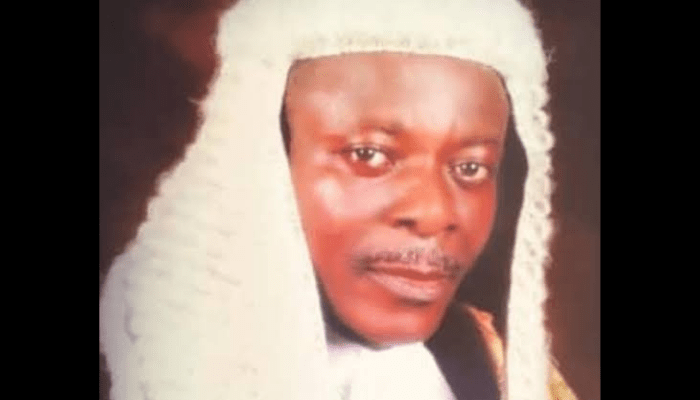 Some years ago, the famous Government College, Umuahia, Abia State, brought two youths together. Not just by reasons of educational pursuit but also by ideology. Ken Saro-Wiwa was a known environmental rights activist.

Same for Lucius Nwosu. While Ken was a literary icon, Nwosu was a legal luminary.

Later, Ken was murdered under questionable circumstances by the powers that be, leaving his schoolmate Lucius to fight on. While his fellow Government College Umuahia alumnus, writer and environmental activist, Ken Saro-Wiwa used his literary power to draw the world’s attention to the destruction of the Niger Delta, particularly his Ogoni community, Lucius Nwosu deployed his immense legal mind and talent to fight the oil companies directly in court. He was a fierce advocate for the victims of environmental degradation.

That was the situation until early hours of Tuesday, April 5, 2022, when the light dimmed for this respected environmental rights lawyer and philanthropist Barr. Lucius Ezeakammadu Nwosu, a Senior Advocate of Nigeria.

A true lion at the bar, his death demonstrates forcefully to us that life is fragile and unpredictable and that as mortals we must all be prepared for exit at any given time.

His quiet and peaceful exit was uncharacteristic of him because he was a man of the people, egalitarian and effervescent. Whenever he entered a place, people must take notice of his presence. But as the Igbos would say, that is how he and his “Chi” (God) made their covenant.

Lucius Ezeakamadu Nwosu lived the full force of his name. He abhorred cant, and detested injustice and oppression.

He fought for the dignity of the human person. He was of light – as his name, “Lucius” suggests, even though those whom he fought in court hated him for his guts and never-say-no spirit

But that was out of pure pique and frustration for the relentless force he brought in his advocacy for the victims of grotesque and unregulated operations in Nigeria.

After his secondary education, he engaged in personal studies through which he obtained his GCE ‘A’ Level and thereafter proceeded to the University of Nigeria, Enugu Campus, where he studied law from 1976 to 1980. He did his law school programme at the Nigerian Law School Victoria Island, Lagos, and was called to the Nigerian Bar in July 1981.

Barr Nwosu began working while he was still a secondary school student as he was employed as a contract staff in the Land and Legal Department of the Shell British Petroleum Company of Nigeria Limited in 1973 and in the Hydrocarbon Division of the Federal Ministry of Mines and Power, Port Harcourt, from October 1975 to September 1976.

After qualifying as a lawyer, Lucius E. Nwosu, SAN, commenced his legal practice as a member of National Youth Service Corps (NYSC) in the law firm of D. A Akintoye & Co, Ilorin, Kwara State, from 1981-1982. From August 1982-1986, he delved into rigorous legal practice, starting as a junior counsel at Sotonye-Denton West & Co. In August 1986, he established the law firm of Lucius E. Nwosu & Partners with the firm’s range of practice and expertise spanning across tortuous hydrocarbon environmental law, bankruptcy, conversion of landed hereditaments, oil and gas law, energy, corporate law and real estate.

As a Port Harcourt boy, Nwosu embodied the wefts and wafts of that city. Although he loved the city, he was nevertheless enraged by the misfortune which oil brought to the otherwise “Garden City” of his birth. To his chagrin, there were no gardens left in Port Harcourt; instead, soothing now falls from the skies on everything from its polluted environment. Proximity to this environmental anomaly and tragedy compelled Lucius Nwosu to act rather than flee.

From then on, he devoted his legal mind to fighting for environmental justice. Two things drove him: first, he had access to rich family documents which his father, a prewar Shell employee secured, and second, he was hurt by the destruction of the pristine ecology and environment he knew as a child by the ravages of crude oil production.

He won series of cases for these communities in courts by taking on giant oil corporations whom everyone else feared. At first, it was like the battle between David and Goliath, for no one dared take on these over-resourced and over-protected giants. But with time, Niger Delta oil pollutants quaked at the mention of the name, Lucius Nwosu.

He was the most consequential environmental lawyer of his generation. But the day a man is born is also the beginning of his death.

That is the cycle of our lives. Lucius Ezeakamadu Nwosu, to all intents and purposes, has completed the cycle allotted him. He always knew that this day will come, and by all indications, he was prepared for it.

He was a luminous character: maverick, humorous, and deeply humane.

His humanitarian services cut across village, community and states. He used legal profession to support the socially deprived persons, organizations and communities. He believed in equity and justice and pursued them to logical end.

For over three decades, Nwosu was actively involved in community development projects across Imo and other states of the federation. He transformed his native Udo community in Ezinihitte Mbaise Imo State into a modern town with basic facilities.

Barr Nwosu loved children. Little wonder he adopted the school feeding programme for the mission schools. His absence was felt last Easter when people failed to get his usual gifts. Udo and indeed the nation is dimmer today with his passing. His humanitarian work broke barriers and paved way for many to follow.

A man of simplicity, although he touched many lives, he expected nothing in return. Unlike his peers, he rejected several offers of chieftaincy titles, rejected being made a Catholic church knight, rejected moving around with hordes of security aides and rejected living a flamboyant lifestyle.

Through the decades, he not only gave all of himself to the cause of development, but inspired generations that followed to try to live up to his example.

I doing all these things, he remained exceptional — he never believed that what he did was more than what any citizen of his community might do. He believed that in all of us, there exists the capacity for great courage, a longing to do what’s right, a willingness to love all people, and to extend to them their God-given rights to dignity and respect.

And it is because he saw the best in all of us that he would continue even in his passing, to serve as a beacon in that long journey towards transforming the lives of the masses.

He was married to Dr. (Mrs.) Chinelo J. Nwosu and the union is blessed with five children. As a good family man, he saw to the education of his children to various levels. His hobbies included boating and travelling. As his body is committed to mother earth this Friday, June 10, 2022, our prayers and thoughts are with the family and all those traumatized by the news of his sudden exit. Sleep on Lucius, sleep on our colossus, sleep on our SAN. The children, grand and great grand children shall learn you in their history books.