Infringing the rights of others in a civil manner 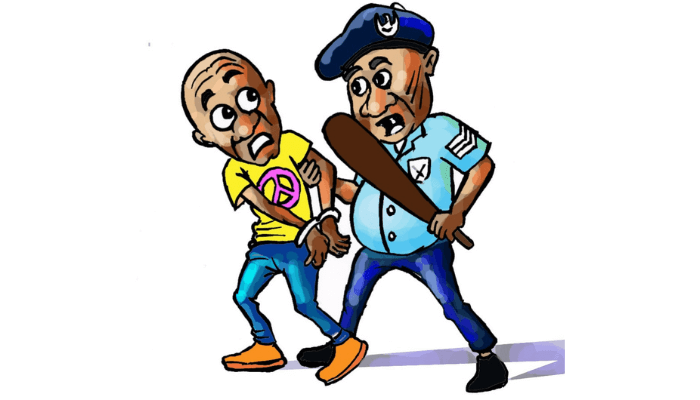 Civility warrants orderliness and decorum of all kinds in its entirety to foster peace. It is fair to recognise the sanity that aligns with mankind. The force for compliance from those in authority may appear personal rather than objective.

Sorely, many receivers of molestation and harassment from various office holders have never found reason to speak out for help.

It is either the system permits silence or the person in office is paying hugely to mute the victims from making the matter loud enough to be heard by the law or the enforcers. The gimmicks continue in a cycle of repetition until we find a victim in power.

Laws are made to curtail excesses of any nature among citizens and not to put another person at disadvantage.

If by chance someone is caught in the web of violating the laid down rules, there are measures that will not abuse the right of the individual while serving punishments.

At the extreme, a citizen may lose his rights to criminal offences of higher degree. However, in a situation of civil offences with mild penalties, applying the wrong measures will result in abuse of human rights. These occur most often without checks, after all, the parties involved enjoy immunity.

These rules, as enshrined in the constitution, are subjected to interpretations by both the lawyers and the judges of different jurisdictions. Their jurisprudence is pivotal to judgement delivered on so many perspectives of availability of proofs and evidence. On many occasions, the plaintiff keeps appearing on request in court to foster judgement but other parameters may delay the essence of the final verdict.

Meanwhile, several other cases beg for attention without substantial detailing from probably the attorney or the appellant. While all these are going on, someone might be in detention for his case to be clarified. Among the bottlenecks are accused persons at various correctional centres awaiting trial.

The existing laws may have shortcomings as society evolves with time, that notwithstanding could make the law extant as other amendments come without bias.

There is no vacuum in government as sentiments create some loopholes that may degenerate to a serious problem. Rule of law in governance makes the society habitable; with some serious attention to equity in enforcing these guides among others.

A balanced side of humanity transcends through aligning with the essence of constitution and the unparalleled interpretation of same. The moment prejudice suffices for objectivity in the cause of relating laws, the essence is defeated.

Errors are humans; but some are detrimental and should be avoided. Most significantly of them are among the medical personnel who may find it hard to admit to their unprecedented errors when they occur. Truly, as their motto signifies that they care but God heals, it shouldn’t come with negligence and infringement on the rights of their patients.

In administering care and professional advice, doctors and nurses shouldn’t be too quick to react to helpless patients due to pains from the clients or fatigue from the medical personnel.

No doubt, most public medical outfits are short of capable hands as the ratio of patients to doctors are unequal. This should not predict inefficiency to the available few.

A fair survey at some Federal Government-financed hospitals would reveal the serious shortcomings as it affects quality delivery of services. Making some of these services free may have the best intentions of the government but managing it and monitoring these facilities have not been helpful.

If the citizens do not have adequate information about what facility is available for public use, the personnel in charge would take serious advantage of this goodwill to deter the beneficiaries from accessing.

A typical example is the effort of the government to subsidise the price of some drugs but would remain at the same cost for the benefits of the handlers.

Casual workers at some factories in the country would relate very well with the level of impunity at how their employers maltreat them. The industrial laws, both local and international, have not found its foot in practice here. Serial insensitivity to the plea of the labourers as clamoured for, have fallen on deaf ears of the institution.

This plight might be segregated as some companies respect the rights of their employees but not in all cases of practice. It is still not over with double taxing in some spheres of income for salary earners; the take home is just too little to remunerate outstanding bills.

If the reports by the World Bank is something to go by, the poverty index in Nigeria is rising, with above 95 million people in 2022 from 89 million in 2020. Poverty has been weaponised to torment the mind of an average Nigerian in making constructive decisions at difficult moments like voting in leaders.

It is an infringement to deprive anyone of his rights by occupying an office and making your seats of authority a place of plea for bargain. Jobs are eluding the qualified without tangible reasons of deprivation. The certified are kept at bay from the duties and the results are chaotic with unskilled labourers.

Agencies of government saddled with the responsibilities of relating with the citizens may have so many questions to answer. The disparity in information calls for curiosity. Some services are claimed to be free but get paid for in reality.

Some inflated prices of government-subsidised products are relatively worrisome. Uneven distribution of projects of values to citizens based on affiliation with political parties is quailing to confidence. Irrespective of tribes, ethnicity and religion, the benefits of being a citizen shouldn’t be segregated.

A mutual agreement between political office holders and the electorates would corroborate civil patterns of resolution. Not all events should be politicised as it degenerates relationships. The enforcement of existing laws will not be as powerful as educating the citizens of their civil rights and how to exercise them.

Those little lines of violation should appear so clear for all parties to view and be convinced. All hidden interpretations of the constitution will remain unjust as long as it is not revealed to violators.

A crime that is unilaterally committed is inexplicable to justice; as equity is the bedrock of unity. The unifying elements are portrayed in the constitution for everyone and it should be.

Fashakin, an educator, writes from Lagos

Exodus of the next generation; time to be concerned .