Edo 2020: As Oshiomhole begs to remain godfather, he should remember the Igbinedions 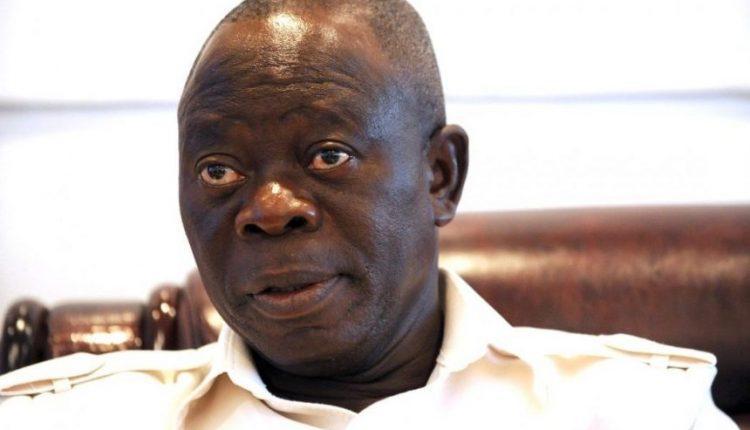 What does former National Chairman of the All Progressives Congress (APC), Adams Aliyu Oshiomhole want? Why would he go on his knees to beg Bini traditional chiefs?

The answers cannot be as simple; him wanting a Bini man to be governor? After all, both Pastor Osagie Ize-Iyamu, his on-going preferred candidate, and Godwin Obaseki, his estranged partner, are Bini. What then is the difference? Why does he want one and not the other?

So many stories have spawned about Oshiomhole, a former national labour leader, under whose watch as governor, pensions were not paid in Edo State. In his dying days in office, he boasted that he ended the reign of godfathers. He considered ending godfatherism in Edo politics a major achievement.

To his credit, Oshiomhole unabashedly shows the full measures of the desperation of a Nigerian politician. Unlike his colleagues, he does not hide in pursuit of his ambitions. He is at the tail end of his long political journey. One more slip would cast him in further doldrums. He needs Ize-Iyamu to be governor. It’s a lifeline for him.

Oshiomhole’s support of Ize-Iyamu as replacement for Obaseki was the precipitating factor in Oshiomhole’s loss of his plum seat as national party chairman, suspended by a mere Ward Chairman. The December 2019 suspension of Oshiomhole seemed like a joke until courts confirmed that he could not serve as party chairman while on suspension. President Muhammadu Buhari finally halted any Oshiomhole’s moves with the disbandment of APC’s National Executive Committee. He has been jobless since then.

Being on his knees for Bini chiefs is a small price for his own good. His future is bleak with prospects of an Economic and Financial Crimes Commission, (EFCC) investigation rising by the day.

“To those I sold the product that turned out to be fake, God you know I didn’t know he was fake. Only time shall tell who a man is. Lord, he who forgot us, our time is coming. We shall speak to you, God in heaven. You know we voted him in innocence and in trust. He has abused the trust. Enable us Lord, with our PVCs (Permanent Voter Cards) we shall punish him,” Oshiomhole prayed, to resounded sound of Amen from his supporters.

“With our broom we shall sweep him out. Together, we will bring your servant who is God-fearing, who will not repeat his mistakes and will complete the project of taking Edo to the next level. All these and many more we say in the mighty name of our Lord Jesus Christ.”

Why was Ize-Iyamu seated? Could he not have joined his benefactor in begging the Chiefs? Could be that Ize-Iyamu has been Oshiomhole’s benefactor for years contrary to popular narratives or he wanted Oshiomhole to bear part of his deserved punishment? It is possible Ize-Iyamu did not believe the prayers.

Oshiomhole owes Ize-Iyamu, the God-fearing servant, loads of apologies. Will he make them privately? Would the apologies be in public? Would any public be more ideal than the same campaign grounds on which he castigated Ize-Iyamu four years ago? Have the people forgotten?

Ize-Iyamu still bears some marks of his days as the governorship candidate of the People’s Democratic Party (PDP).

In Suit No. FHC/BE21C/ 2016 before Justice M. Umar, at the Federal High Benin City, EFCC alleged that Ize-Iyamu and former Edo State PDP Chairman, Chief Dan Orbih, who is now Vice Chairman South-South of the party; current State chairman of the party, Hon. Tony Aziegbemi; former Deputy Governor of Edo State, Lucky Imasuen, and Efe Erimuoghae Anthony received public funds illegally to the tune of N700 million for the purpose of the 2015 general election, contrary to the provisions of the EFCC Act and the Money Laundering (Prohibition) Act.

Oshiomhole has a challenging past that is encapsulated by the wages of the length of his tongue. Can he pull back the words?

Lucky Igbinedion helped Oshiomhole to power in 2012. What has Oshiomhole not said about Lucky and the older Igbinedion? Has he begged them? Should it not have been Lucky who would have begged the Binis, being that he practically imposed Oshiomhole on Edo State in 2007? He accused the Igbinedions of trying to be godfathers of the state’s politics, among other allegations.

“People asked me, why didn’t you speak all these years. If I say it, reporting thieves to thief, what difference does it make? Now, I can talk because I know that the man there, if I can provide evidence, he will act. There was no point reporting a thief to an armed robber,” he said in the seventh anniversary of his administration in November 2016. He spoke extensively of the land-grabbing instincts of the Igbinedions. There was an earlier charge of Lucky misappropriating $31 million (about N7 billion then) from Edo coffers.

The awkwardness of Oshiomhole campaigning for Ize-Iyamu as governor of Edo State is a big punishment for the same Oshiomhole that at campaigns only four years ago said unimaginable things about Ize-Iyamu. Oshiomhole at all times impugned Ize-Iyamu’s character, rating him unelectable.

After boasting at the 2016 campaigns that he had ended the days of godfathers in the state’s politics, Oshiomhole wanted to assume the same position. It is said to be a core issue in his disagreement with Obaseki.

The campaigns would be really interesting. Now he is on a beggarly mode, Oshiomhole is likely to talk less and be on his knees more. One just hopes people would notice.