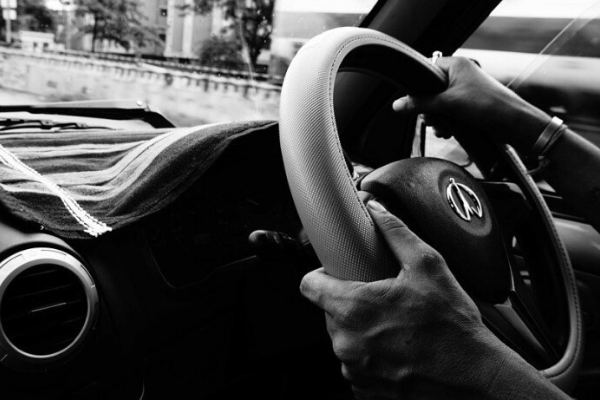 Ademola Adeyemi was thinking about going on a trip across the Nigerian border with a mechanic introduced to him by his father when his friend told him about Cars45. The twenty-six-year-old HR executive at a fin-tech startup in Lagos had reached his savings target and was headed to Cotonou, Benin Republic, West Africa’s biggest market for used cars.

But after browsing through the Cars45 site for about ten minutes, Adeyemi found a car he was interested in. The next day, he visited a Cars45 retail lot and purchased his car. Adeyemi explains that being able to view an inspection report that detailed the true condition of the car, absence of additional fees for buying the car and saving on a long twelve-hour journey to and from the neighbouring country, made Cars45 a better option.

“That was seven months ago. Beyond regularly servicing the car, it has not had any problems.” Adeyemi says.

Cars45 offers prospective buyers and sellers of used cars access to an online auction, a wide inventory of cars for direct purchases from any of its retail lots, and trade-ins. Before Cars45, the cheapest and least risky way to own a used car in Nigeria was to drive one over the border. Now, buyers can browse through a catalogue of vehicles, filtering their searches by model, mileage and grade from the comfort of their homes, with the confidence that they are getting value for their money and quality, thoroughly inspected cars.

For prospective sellers, a short quiz on Cars45’s website provides a free quote, and a quick 45-minute visit to an inspection centre could mean the car is placed in an immediate online auction, with a best price offer and money in the bank within the hour.

Founded in 2016 by Ekop Ikpe, Cars45 brings transparency, convenience, reliability and efficiency to the used cars marketplace, by improving standards for consumers and helping to re-organise the dealer ecosystem to allow future markets to thrive. By creating a business model that offers immediacy to the sale or purchase of a vehicle⁠—through a combination of technology, processes, and a network of highly-visible physical locations⁠—one of the first issues Ikpe is looking to solve is trust. Shifting the consumer mindset⁠—that the best-used cars are gotten from Cotonou, some 77km’s away from Lagos⁠—will take some time, but Cars45 is making excellent progress.

The idea came from a culmination of Ikpe’s learnings from 7 years working in consumer internet. Before Cars45, he was the commercial director at Konga (at the time, Nigeria’s largest eCommerce player), where he saw similar issues that required the founder, Sim Shagaya, to re-visit the company’s business model from time to time. His work at DealDey, as CEO, and before that, at Three Stitches, an online clothing retail site which Ikpe founded not long after university, provided insights into consumer behaviour online and exposed gaps in the technology and infrastructure that would support the promising consumer internet opportunity.

“In a Nigeria where probably only 3% of people will ever own a home, cars are the next biggest thing to focus on and that was the market for us. But there is so much stress and a lack of transparency in the market for cars in Nigeria.”

Ikpe decided to build his next company around used cars. Navigating a historically fragmented market, fraught with value chain and trust issues would be tough, but potentially rewarding for a number of reasons, including the relatively high-value ticket sizes, predictable replacement rates, long potential customer life-cycles, and the after-sales service opportunity.  For many Nigerians, car ownership is a necessity, not a luxury. Providing good, value-for-money used cars would be as important as driving better standards across the entire value chain. Ikpe’s goal is to improve and re-shape the consumer experience entirely, solving a major pain point with a significant buying decision.

Since its launch in July 2016, Cars45 has grown to over 600 physical locations (retail lots, inspection centres and franchise and partner outlets) and to include over 1,000 dealers in its network. In the early days, Ikpe and his staff went from house to house, inspecting vehicles. Cars45 is now the single largest trader of used cars in Nigeria and the operator of Nigeria’s only online auction. Before going into the online auction, each car is put through a 200-point check, including background checks, mechanical and physical inspections.

According to a 2016 Deloitte Consulting report, only 1.5 million new vehicles are registered across Sub-Saharan Africa, home to over a billion people. Second-hand vehicles dominate the automotive retail sector for multiple reasons, including a lack of manufacturing capacity for new cars and few affordable financing options for consumers. In 2017, less than 7,000 new cars were sold in Nigeria, and over 90% of the country’s fleet are used vehicles, typically pricing in a range between the equivalent of approximately $3k and $7k.

“We are using technology to bridge a gap that exists in Nigeria but has not been explored before. We are doing better than linking buyers and sellers. We are providing quality assurance to Nigerians.”

Ikpe is leveraging technology in Cars45 primarily through the company’s unique online auction and pricing algorithm. Cars45 uses its proprietary pricing data to project trends in supply, demand and pricing for used cars. By taking the position of a middle-man between buyers and sellers in live online auctions, the company is able to achieve the best price offer for its customers and to refine the accuracy of its growing national pricing database,  which Ikpe now believes can reliably price a car that was manufactured as far back as 1984.

As he secures Cars45’s place in the ecosystem, Ikpe is also creating on-demand jobs and increasing income generation for its dealers in the process. In the long term, one of the most important problems Cars45 could face, will be the ability of its dealer network to keep up with the growing volume of inventory passing through the platform. Its social impact has also been very phenomenal when one considers the wealth creation potentials for all the various groups within its ecosystem – merchants, dealers, quality control teams. Examples abound of young people who joined as merchants and today own their own car lots and employ between 4-10 in the automotive trade.

Ikpe is already experimenting with several innovative solutions, including the recently launched autopreneur initiative, which complements the government’s efforts to lift millions out of poverty, and is a viable and sustainable income stream for Nigerians.

“I have bought and sold cars in Nigeria and there is nothing as seamless as Cars45. The extra layer of transparency means the safety of Nigerians using Nigerian owned cars is guaranteed.” – Aderemi Falolu, Cars45 customer

Valuations aside, a major hindrance to personal car ownership in Nigeria is financing. Consumer loans are largely non-existent. To counter this, Cars45 is securing partnerships with financial institutions to provide loans to buyers and sellers of cars through the platform. The company is also working with major distributors like Kia Motors to offer valuations and trade-ins of used cars for refurbished, certified used cars or new cars in their own inventory. By increasing liquidity on its platform – on both the dealer and consumer sides – Cars45 hopes to sustain its march towards offering the fastest and most convenient route to car ownership for millions of Nigerians.

In October 2018, Ikpe became one of the first Endeavor Entrepreneurs selected in Nigeria. Joining Endeavor’s global network, with a footprint of 30+ countries, aligns perfectly with the growth targets he has for Cars45, especially with plans to expand the model into other countries in sub-Saharan Africa, including Ghana and Kenya where it is operating pilots.

Endeavour is home to nearly 2,000 impressive entrepreneurs who, like Ikpe, are leading high-growth, scaleup stage companies in growth and underserved markets like Nigeria. The network offers a global peer network, a deep bench of product and market expertise, through over 4,000 business leaders that support Endeavor Entrepreneurs with active mentoring, cross-border market expansion support, and capital.

So far, Cars45 has raised $15 million from the Frontier Car Group. As it raises future growth capital, Endeavor will help Ikpe through the participation of Endeavor Catalyst, its VC fund whose capital is reserved exclusively for Endeavor Entrepreneurs, and by providing targeted investor introductions, curated investor meetings and road-shows, as well as through its dedicated active capital mentoring program.

Cars45 is pioneering a fundamental shift in Nigeria’s used car industry, and Ikpe is not only thinking big, but scaling rapidly. Cars45 has the potential to become a titan of the African retail industry, by defining a world-class customer experience for millions of car owners in Nigeria and across the wider continent.

Insecurity and poverty crisis in South East: Evidence of…

Storytelling – panacea to second and third degrees of…