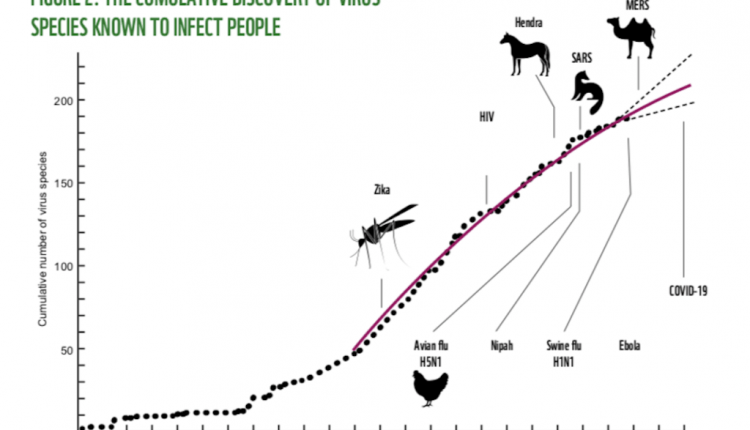 Some new diseases pose a grave threat, as recent deadly epidemics and pandemics including HIV/AIDS, Severe Acute Respiratory Syndrome (SARS), Swine Flu, Middle East Respiratory Syndrome (MERS), Ebola and, most recently, COVID-19 have shown. These are all zoonotic diseases; diseases caused by germs that spread between animals and people. Recent research also shows that they are becoming alarmingly frequent.

A recent report co-written by WWF and Dalberg (“Covid-19: Urgent Call to Protect People and Nature) shows that there is an increase in zoonotic disease outbreaks and that it is a symptom of a broken relationship between humans and the natural world and is likely to worsen. People increasingly encroach into natural ecosystems, accelerating levels of contact between humans, wildlife and livestock. This results in additional exposure to new animal pathogens and creates dangerous conditions for spillover from one species to another. 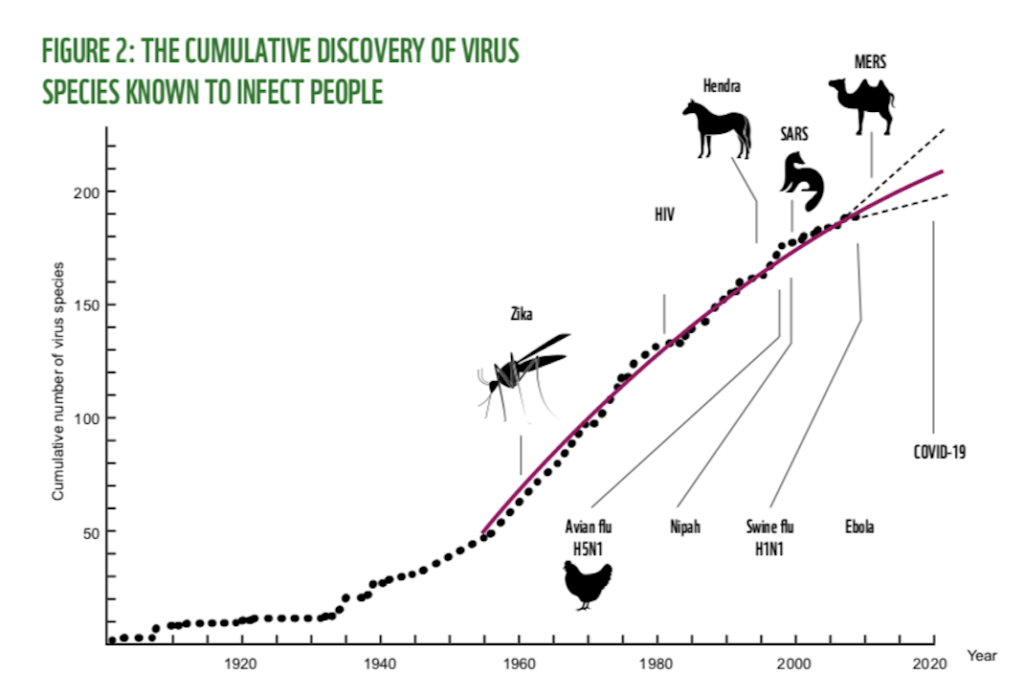 Interactions with nature can expose people to a wide range of animal diseases. In fact, approximately three to four new infectious diseases emerge each year, most of which originate from wildlife. Over the last 30 years, approximately 60-70 percent of the new diseases that emerged in humans had a zoonotic origin.

Animal pathogens can infect humans directly through contact with the wild animals that are natural carriers of these diseases, or indirectly by transmission through intermediate hosts, such as livestock and domestic or peri-domestic animals that live in proximity to humans. These intermediate hosts act as “mixing vessels” that can lead to the genetic variation of diseases, enabling them to infect humans.

Covid-19, linked to a disease prevalent in horseshoe bats, is the latest example of this type of spillover and has demonstrated the grave consequences of unregulated human-wildlife interactions. However, this is not a new phenomenon, as a number of other deadly global pandemics have resulted from species spillover.

While it is more difficult to trace the exact drivers for the numerous Ebola outbreaks over the last 20 years, many researchers have directly linked the rates of deforestation in West and Central Africa to an increased likelihood of Ebola outbreaks. Researchers believe that the extensive deforestation in these regions increases contact between humans and potential Ebola host species, such as fruit bats and primates, leading to greater potential for transmission from hosts to humans.

The initial SARS outbreak is likely attributed to human contact with infected palm civets and raccoon dogs in a wildlife market in Guangdong province. Researchers found that several of the early SARS patients were involved in selling or preparing wildlife for consumption, likely increasing their exposure to the virus. Other cases were linked directly to a restaurant where six SARS-CoV positive civets were housed in cages. Although researchers cannot be certain that the initial transmission from animals to humans took place in a wildlife market, it is likely that wildlife markets and restaurants were central to the spread of SARS.

The cause of increased numbers of zoonotic diseases

WWF and Dalberg found that two widespread environmental risks are linked to the accelerating emergence of zoonotic diseases: unsustainable food systems driving the large-scale conversion of land for agriculture, and the trade of high-risk live wild animals and their meat.

On the one hand, driven by unsustainable food systems, the large-scale conversion of land for agriculture is increasing interactions between wildlife, livestock and humans. Land conversion is destroying and fragmenting forests and other natural habitats around the world, resulting in higher levels of contact. This problem is only set to worsen as the challenge of feeding a growing population increases and diets shift – with the public being urged to change their dietary and consumption habits towards more sustainable choices that will help solve the problem.

The land clearing that results from greater demand for food also contributes to increased human-animal contact. Since 1990, 178 million hectares of forest have been cleared, which is equivalent to the size of Libya. Most habitat loss associated with agriculture is attributed to just three commodities: beef, soy and palm oil. As a result of extensive land conversion, about 70 percent of forests globally are now within one kilometre of a forest edge and are exposed to further fragmentation.

Nigeria, unfortunately, is at the very top of the list of deforestation; in 2005, Nigeria had the highest rate of deforestation in the world, according to the Food and Agriculture Organisation of the United Nations (FAO). Looking at the years 2000 to 2005, Nigeria lost 55.7 percent of its primary forests, and the rate of forest change increased by 31.2 to 3.12 percent per annum. More recent data is even more catastrophic. In total Nigeria has now lost 95 percent of its forest coverage, the rate of deforestation annually was at 5 percent from 2010 and 2015. The forest is cleared for logging, timber export, subsistence agriculture as well as the collection of wood for fuel.

In addition, the poor safety standards associated with the unregulated sale and consumption of wild animal meat in markets and restaurants, presents further opportunity for human contact with wild species, and in turn increases exposure to zoonotic diseases. However, global urban demand for wild meat as a culinary delicacy is growing, driving increased sale and consumption, and increasing the potential for exposure to diseases. The report calls for governments to halt the high-risk wildlife trade and increase monitoring and enforcement to combat illicit wildlife trade.

In places where the consumption of wild animals is a necessary source of protein, particularly for rural populations in developing countries, investment in safer, more sustainable sources of protein is needed to avoid the risk of exposure to dangerous pathogens – as evidenced with the 2014 Ebola outbreak. The report urges governments to support vulnerable communities by protecting their food security and livelihoods in sustainable and resilient ways.

The pandemic has shown that whether tackling environmental issues or health crises, solutions must recognise the deep interconnectedness of different systems. Cross-cutting responses are required, such as promoting more sustainable and efficient food systems, encouraging healthier and more sustainable diets, reducing overproduction and consumption, and moving towards nature-positive and climate-neutral financial systems that incorporate environmental risks in their decision-making processes.

These systemic solutions must be coordinated between different actors, including governments, the private sector, the public, IPLCs (indigenous peoples and local communities), and environment, animal and health specialists, leading to a general societal shift to embrace a healthier relationship with the planet.

Boosting access to credit: The role of the credit bureaus