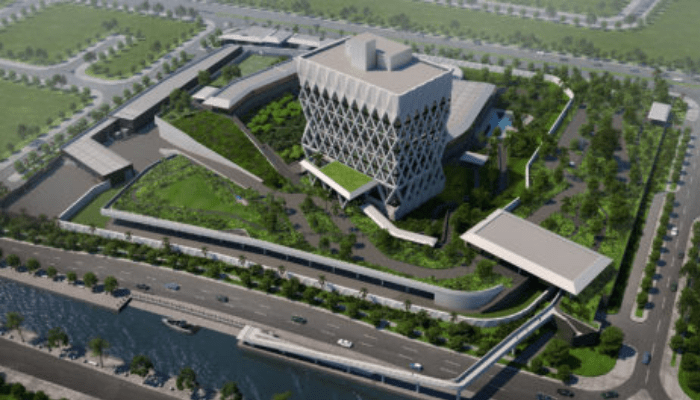 The new US Consulate General’s office to be built in Eko Atlantic City in Victoria Island, Lagos is quite strategic to the development of the city, fresh insights on the new office facility have shown.

The new consulate office for which the United States government has approved a huge contract sum for its building will be sitting on land area measuring 12.2 acres which is approximately 49,372 square metres, making it an anchor project in that city still struggling to achieve its dreams.

“Developers trying to create new cities typically require an anchor project or a major attractor of other activities and players to spur further development activity,” Dolapo Omidire, CEO, Estate Intel, explained to BusinessDay. He noted that, so far, most of the development activities within Eko Atlantic have been in the residential sector, and that has not quite done the job.

According to him, what is typically required in a large development like Eko Atlantic is a major regulator, the head office of a major bank/other relevant companies, or even a consular of a major country for the project to move with quick steps.

“All of these have the capacity to encourage other businesses to come,” he said, supporting an earlier revelation by Evelyn Edumoh, COO, Arkland Group, who told BusinessDay in an interview that their two developments in Eko Atlantic have encouraged more local investors to take position in the city.

The Bureau of Overseas Buildings Operation, which announced the Design-Build Award for the new project, says $319 million, about N159 billion, would be committed to building the new facility that promises a lettable space of 14,685 square metres.

The new office, whose aim is to provide a modern, resilient platform for diplomacy in Nigeria, is expected to be completed in 2027, according to its promoters. It has Pernix Federal, LLC of Lombard, Illinois, as the main contractor while the design architect is Ennead Architects of New York.

Though the date for construction work to begin on the office complex is yet to be announced, the consulate office is expected to be completed in 2027and, upon completion, it will feature Programme Offices, Consular Services, Cafeteria, Multipurpose Room, Recreational Facilities, Warehouse, Shops, Entrance Pavilions, Parking Garage, Utility Building, Boat Dock and Pedestrian Bridge.

“Purchase of land for a new Consulate General will ensure we can continue to work with Nigerians to provide opportunities for economic growth and development in Lagos,” Bray noted, adding, “the United States is proud to be participating in Eko Atlantic’s growth as part of our commitment to further enhance and strengthen the cooperation between us and Nigeria.”

Gilbert Chagoury, founder/chairman of the Chagoury Group, noted that, by this development, United States has joined the league of high profile property buyers in Eko Atlantic City with its top-of-the-range and self-sustaining infrastructure.

Interest in the island city has been quite encouraging from both foreign and local investors. According to Ronald Chagoury Jnr, Vice Chairman, South Energyx Nigeria, activities at a time were slow in the city which reflected the economic slowdown in Nigeria, but have picked up dramatically with average of three visits per day by potential investors.

Chagoury Jnr had told BusinessDay, during a tour of the city, that Eko Atlantic represented what was possible to bring a turnaround in Nigeria’s economy, explaining that all that the country needed to witness growth was to get it right in the critical sectors of the economy including oil and gas, health, education, housing and infrastructure.

“We have provided prime land and infrastructure at no cost to the government. All that developers and investors need is to come and start planting houses”, he added, pointing out that the city was designed as mixed use development for residential, commercial and retail developments.