What does arrest, indictment of Magu mean to Buhari’s war on corruption? 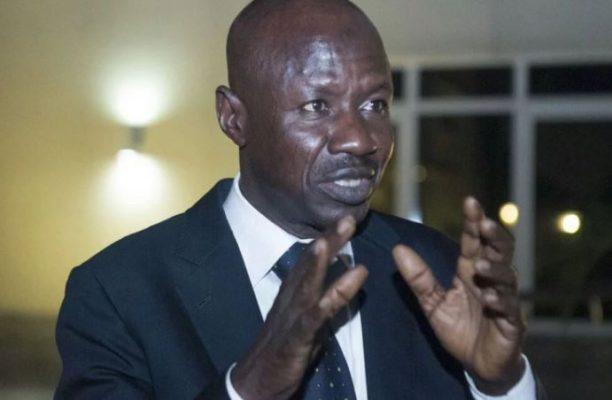 Nigerians were on Monday, July 6, 2020, stunned by the news that men of the Department of Security Services (DSS) had arrested the now suspended Acting Chairman of the Economic and Financial Crimes Commission EFCC, Ibrahim Magu and whisked him away to the Aso Rock Villa for interrogation over alleged fraud.

At the time of filing this story, Magu was in detention for days now at the Police Force Criminal Investigation Department (FCID) and is being questioned by the Ayo-Salami-led Presidential Panel.

His latest travails began with a memo written by the Attorney General and Minister of Justice, Abubakar Malami over alleged misappropriation of recovered funds, gross misconduct and insubordination.

The multiple allegations of fraud leveled against the anti-corruption czar were to the tune of a whopping N37 billion including confiscated property he was said to have cornered to himself and his cronies across the country.

Magu was also accused of living in an apartment of N20 million annually allegedly paid for upfront of N40 million by an alleged corrupt retired Air Commodore, who is being investigated by the EFCC.

The multiple allegations against him led to his presumed suspension by President Muhammadu Buhari and his replacement on Tuesday by the Director of Operations in the EFCC, Muhammed Umar in acting capacity.

Magu has been in the vortex of controversy in the last five years, following the refusal of the 8thSenate led by Bukola Saraki to confirm him as substantive Chairman of the EFCC. The Senate rejected him because of a damning report of the DSS in 2016, which advised the upper legislative chamber not to confirm him on account of fraud and incompetence.

However, President Muhammadu Buhari re-nominated him but he was again rejected by the Senate in 2017 yet the President allowed him to act in clear violation of the EFCC ACT 2004, which stipulates that the Senate must confirm him before he can commence operations in the commission.

This development has stirred the nation and opinions are as diverse as they are passionate. While the Presidency in a statement insisted that the trial of Magu signifies the intention of the Buhari administration to ensure that no one is above the law in the anti-graft war, some analysts debunked the Presidency’s position and alluded to the fact that the administration reeks of high profile corruption.

Speaking to BDSUNDAY, security analyst and columnist, Majeed Dahiru said the Magu saga has tainted the credibility of the Buhari’s administration to fight corruption.

Majeed said: “The events of the past few days have simply made meaningless of the five-year-old war on corruption of the Buhari administration because if they are now accusing the arrow head of the war on corruption, it means everything that he has done in the last five years and by implication the entire war on corruption is questionable both in intention, execution both implementation.

“So, that goes to prove some pundits right that Nigeria is actually more corrupt today than it was before the Buhari administration came on board.”

He advised for a holistic war against corruption even as he regretted that corruption has been narrowed down to graft and stealing of money while in reality is more than that.

“Corruption is much deeper and broader than that and that is why in the first place the EFCC is not supposed to be termed or classified as an anti-corruption agency, the EFCC is an anti graft agency.

Also speaking to BDSUNDAY, a public intellectual and analyst, Katch Ononuju, dismissed the Buhari’s war on corruption as a sham and full of incompetence.

“We have only just interrogated one single department of the government and we are seeing this massive fraud. Imagine what will happen if we turn our eyes to the presidency. How come the grass cutter has not been prosecuted, how come the bullion vans in Lagos nobody has asked a question about Tinubu’s offensively cocky position?”

He called for a holistic investigation of all the directors in the EFCC from the time of the pioneer chairman, Nuhu Ribadu, adding that Magu must have conspired with the directors to allegedly loot the nation.

“Magu could never have acted alone, we want them to holistically investigate the director of operation, the directors of records and audits from the time of Nuhu Ribadu and we heard the stories about the Kangaroo execution of orders that are not known to law. Shakedowns were used to strip people of property and such property should have been recorded. So, it is not just about Magu but those that helped him to work against the provisions of section 516, they conspired to commit the same crime with him.

“Let us have a public declaration about the true collections, the true retrievals and the number of property retrieved. That is why the directors must be questioned,” Ononuju said.

Contributing, the Executive Director of the Civil Society Advocacy and Legislative  Centre (CISLAC) Auwal Ibrahim Musa Rafsanjani, said the allegations against Magu although not proven yet, has put to question the credibility and integrity of the fight against corruption of the Buhari government.

He said, “It is going to demoralise other Nigerians who will not have confidence in the fight against corruption anymore because this has brought in certain doubts in the minds of Nigerians and the international community that is why it was not a good development. Nobody is covering any public official for doing something wrong, the government created condition for this to happen.

“If they received previous reports of wrong doing against Magu, why did they not take action on it? Secondly, why should they continue to confiscate asset without legal framework?  They have allowed Magu to accumulate so much power and are now complaining,” he said.

He advised the Buhari administration to use this opportunity to correct some of the wrong things going on in the anti-corruption fight instead of blackmail and media trial.

He also called for the establishment of Assets Recovery Management framework to harmonise recoveries instead of the haphazard way the Police, the Customs Service, the EFCC and ICPC are doing the recoveries.

His lawyers file bail application, insist he will return as EFCC chairman

Meanwhile, his lawyers have filed an application to the Inspector-General of Police (IGP), Mohammed Adamu seeking for his bail.

One of the lawyers, Tosin Ojaomo who spoke to BDSUNDAY, said: “We have written to the Inspector-General of Police Mohammad Adamu and we are waiting for his response and that will determine our next line action. But this IG is very law abiding IG, we have confidence that on the receipt of our letter, immediately an administrative bail will be granted to Ibrahim Magu.

“We sent this application today and we have copied the panel investigating him, we have also copied the Chairman of the Presidential Action Committee Against Corruption (PACAC), Itse Sagay. So, we hope that any moment from now, we will be called upon to either take him on bail on self-recognisance or to come and provide sureties because everybody is equal before the law.”

He noted that all these allegations leveled against Magu will be debunked in the long run and after the investigation, he will return to his office despite the “purported suspension”.

“There is a corrupt but powerful cabal that made it impossible for Magu to come to power for so many years. But he will come out victorious,” he added.

Where is Nigeria on Covid-19 cure?