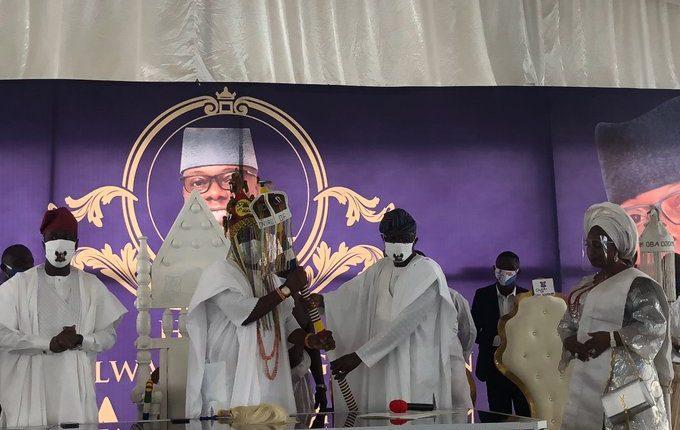 The traditional rites to mounting the seat of Oniru of Iruland, in Lagos, which became vacant in 2019, were on Sunday concluded with the presentation of staff of office to the new Oniru, Gbolahan Lawal, immediate past Lagos State comnissioner for agriculture.

The 15th Oniru of Iru kingdom is to be addressed as Oba Abdul-Wasiu Omogbolahan Lawal, Abisogun II. He succeeds the 14th Oniru, Oba Idowu Oniru, who passed on in September, 2019 at the age of 82.

The new monarch, who resigned his appointment as commissioner a couple of days ago, received the staff of office barely three days after the kingmakers and elders of Iruland selected him among the lists of princes who vied for the throne.

Presenting the staff of office to the Oniru, Lagos State governor, Babajide Sanwo-Olu, charged him to sustain the peace and harmonious relationship that had existed in the land.

Sanwo-Olu described the colourful coronation which held within the Oniru palace on Victoria Island, as historic and called on the people of the kingdom to join hands with him for the growth and progress of Iruland, and of Lagos State.

He said of the traditional institution as the first system of governance, noting that it would forever remain a strong link to Nigeria’s heritage at all times.

“There is no doubt that the future of Iru Kingdom will continue to be bright and promising, and that the ascension today of His Royal Majesty, Oba Abdul-Wasiu Omogbolahan Lawal, Abisogun II, marks the start of the next phase of the journey into that future”, Sanwo-Olu said.

“Today is a historic day in the history of Iruland, as we gather to celebrate the installation of the 15th Oniru of Iruland, it is my firm expectation that you will all rally round your new Oba and join hands with him for the growth and progress of Iruland, and of Lagos State.”

According to Sanwo-Olu, given the pedigree of the new king, there is no doubt that his reign would be a progressive one.

Oba of Lagos, Rilwan Akiolu, described the ascension of the new monarch as divine, saying it was why the process leading to his emergence was fast. He urged him to ensure unity, justice and fairness among the rulling houses.

“Move the Oniru family forward. Ensure the indigene and non-indigene enjoy. Be open to the people. You should leave the Oniru palace better than how you met it,” said Akiolu.

In his acceptance response, the new Oniru promised to rule with justice and fairness as advised, adding that that his mission was to first unite the Oniru family for the progress of the kingdom and the success of his reign.

“On behalf of all the sons and daughters of Iruland, I express profound gratitude to the kingmakers and the government of Lagos State in ensuring that there was fairness, equity and justice in the process leading to my selection as Oniru of Iruland,” he added.