Rivers: Demolition of hotels, auctioning of vehicles threats to investments? 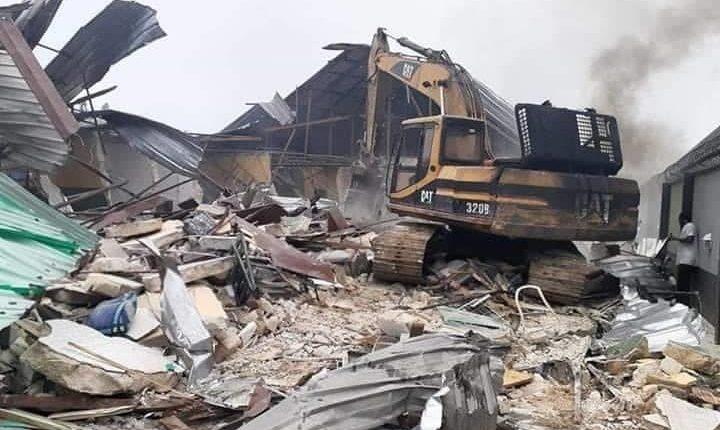 Could the demolition of hotels accused of violating lockdown order and threat of auctioning trucks and vehicles send negative signals to investors in Rivers State? Could the absence of judicial process and fair trial affect the confidence of investors in the oil-rich state and Nigeria as a whole? These are the questions that are making the rounds in Rivers State.

On the other hand, the Rivers State government has posed some questions: Are these two demolished hotels the only ones in Rivers State? Why would only two of them be the ones to meet such fate? Does the demolition represent a pattern in a state that enjoys deep and huge relationship with the organised private sector led at this moment by Nabil Saleh?

Governor Nyesom Wike of Rivers State first announced that hotels violating his shutdown order would be confiscated and auctioned. As members of the public were still debating how such a drastic action could be possible, the governor announced he would rather demolish them. Between Thursday May 7, 2020 when the extreme lockdown began and Sunday morning, May 10, 2020, two hotels in Alode in Eleme town and Onne in same Eleme Local Government Area had been brought to rubbles.

Over 20 trucks and other vehicles were lined up for auctioning. Many business persons and residents are languishing in detention awaiting trial for daring to show face on the streets. No clear penalty seemed to have been stipulated while drafting Executive Orders One to Six that now rule the state in the face of the coronovirus pandemic.

This has caused nationwide uproar regarding the safety of investments in Rivers State; if by fiat, an investor’s property could be reduced to rubbles without investigation, trial, and due process, some business owners have been whispering amongst themselves.

My hotel fell to intra-party rivalry – owner of Prodest

The owner of one of the hotels, Promise Gogolobari of Prodest Hotel in Alode, issued a statement through the spokesman, Dae Legbara, denying most of the charges and insisting that the hotel owners and staff members were never part of the fighting between two task forces.

When news broke of the demolition of Prodest Motel, a half-star hotel owned by a friend and an Ogoni, located in Alode Eleme, the public had been inundated with a lot of misinformation.

The truth is that Prodest Hotel is a victim of an Eleme LGA PDP intra-party and LGA leadership tussle. The hotel was unfortunately caught in a crossfire and entangled with web of community crisis. Simple! The hotel was under lock and key and not in operation. The fight was between rival task forces loyal to different tendencies within the PDP in Eleme and this took place outside the hotel. It had nothing to with the hotel.

This is the simple truth, but rather than deal with the real issues all together, lies are been bandied about: An alleged Prodest Motel violation of the Wike’s lockdown order of hotels to suspend operations; An attack on the task force enforcement team allegedly carried out by the hotel staff members and or hired thugs; That the hotel owner is a member of the PDP; That the PDP youth leader is the hotel owner; and that the hotel is used to aid criminality.

As the public continues to grapple with the confusion of differentials in the stories emanating from the Prodest demolition saga, it has become compelling that the public must be told the untold story, the real and factual story. And in doing so, I will try to deal in the order that was falsely peddled, just as outlined above.

First is to clearly say that Prodest Hotel did obey the Rivers State government’s Covid-19 lockdown order. The hotel was never in operation and never violated the order of government from the day lockdown commenced, and until the time of the facility was raided. This is authoritative.

The said Eleme PDP youth leader is the chairman of the Covid-19 Lockdown Task Force team in the LGA, constituted by the local council authority. He also triples as Alode community youth leader; aspiring to be General Eleme Youth leader. Prodest Hotel is situated in Alode, his community.

Himself and key members of his Covid-19 lockdown enforcement team had reservations earlier booked and were staying in Prodest Hotel, where they normally rendezvoused after the day’s work.

The chairman of the Eleme Covid-19 Task Force, Princewill Osaro Ejiji, belongs to the Tendency group of the PDP that is believed to have taken over key positions in the party structure of the LGA, even though they were seen to be new comers into the PDP.

The other forces, those who claimed to be real (old) owners of PDP in Eleme seemed not to be pleased with the development. They would leave no chance to strike at every opportunity. There has been a cold war between both tendencies. There is no denial to these facts. They are open facts.

Wike inadvertently made matters worse in the process. Recall, the governor, in a bid to further strengthen the lockdown enforcement, had met with traditional rulers and council chairmen across the state on Tuesday, May 5, 2020, where he instructed them to set up similar task forces in their various clans and villages.

Alode community is in Nchia clan. Eleme Local Government is made up of two clans; Nchia and Odido. There are communities and villages in these clans.

Nchia and Odido, including villages under them, had in response to the governor’s directives set-up their various tasks forces, necessitating a situation where there seems to be a multiplicity of task forces, command controls and differences in communication channels.

Now, most of these community-based Task Forces were created with underlined sentiments among different leaders with rival political interests and agenda to pursue within the PDP and the community. It was an opportunity to advance the interest of their various factions in Eleme. Alode, where the LGA task force chairman comes from, did have her share of the task force rivalry.

Immediately the governor made his broadcast, the Prodest Hotel manager drew the attention of the LGA task force chairman to the latest order, asking that his guests be evacuated from the hotel following the government’s ban.

But, based on the governor’s directives, the task force chairman told him not to bother, that he is in charge. He said to the hotel manager that since he and his guests were already lodged before the broadcast, there would be no problem. He reaffirmed Wike’s position that hotels must inform the task force of such situation, and he was in charge anyway.

The hotel, believing that they had thus secured permission to keep their existing guests, who in any case were supposedly the enforcers, kept the existing guests but did not admit new guests. They had to keep their gate ajar, but only for the usual evening rendezvous of Mr. Ejiji and members of his task force. The hotel had become more like their operational point of departure.

As the political rivalry continued to widen between the LGA task force and the newly formed community task force members, one day, the community team having noticed that the hotel appeared open to the LGA’s Ejiji team, they had to come when others had gone out for work and demanded N100,000 from the hotel manager, else, he would be dealt with.

The manager didn’t have any such money to give. This same team had collected N7,000 from another nearby hotel and allowed them to operate. Angered by the refusal of Prodest Motel to pay the N100,000 and the perceived habitation in the hotel of Ejiji, their rival, the community-based team now hinted their bosses, who then informed the governor. It was an opportunity to hurt their political rival and get Ejiji out of the way; Prodest was now their battle ground. It was on that note that the state task force team was drafted in.

On the alleged attack on the police and the enforcement team last Saturday, it was as a result of a fracas between the visiting state team and the LGA team, but this was outside the hotel.

It is obvious that the LGA task force did not know that the police and those who came with the community team were actually coming from the state to enforce the governor’s directives. They also did not know that the matter had been reported to superior authorities. The hotel learnt that when the new team (state) got to the community, the rival factions engaged each other and fracas erupted. No member of staff of Prodest Hotel was involved in altercation that took place outside the facility. They were just watching from afar with disbelief of what was going on.

“So, when we say that Prodest Hotel is an innocent victim of Eleme PDP internal wrangling, you can now understand what we meant,” Dae Legbara, spokesman of the hotel, said.

According to Legbara, “The hotel owner is a good friend of mine. He is from Khana LGA, not Eleme. He is not a politician neither is he a member of any political party. He is a private sector worker based in the western part of Nigeria. Mr. Princewill Osaro Ejiji is not the owner of Prodest Motel; he and his Eleme Covid-19 task force were only hotel guests.

“The members of management of Prodest Hotel were never aware of the fact that Mr. Osaro Ejiji was having any criminal record hanging on his neck, not until the press release by the commissioner of information Saturday evening prelude to the Sunday morning demolition.”

All that is known about him is that he is Covid-19 task force chairman and president of Alode youths, Prodest hotels’ host community. The hotel does not harbour criminals. Prodest, I am aware, maintains one of the best crime-free relationships with the police in Eleme LGA.

Wike’s decision and eventual demolition of Prodest Motel, I still maintain, was hasty and too harsh. It wasn’t a criminal matter. Destroying people’s sources of livelihood in the face of dwindling world economy is to the extreme. There should have been a thorough investigation and fair hearing granted to the hotel management before whatever action. Prodest Hotel never committed such a crime that should warrant such punishment.

The avalanche of condemnation that had greeted the action by the Rivers State government is a clear pointer to the fact that the decision is unpopular and shouldn’t have been in the first place. I sincerely hope that the governor will come to terms with reason and find an ameliorating way out of this.

Wanted youth leader reacts, says, “If I was a wanted criminal, they wouldn’t have made me PDP youth leader.”

According to a statement from Alode Community Development Movement, Osaroejiji, said contrary to the governor’s accusation, he was not the owner of Prodest Hotel demolished by the governor.

He recalled that he had worked hard for the victory of the governor in the 2019 general election and ensured that the party won all the elections in his ward in the local government area.

Wike had on Sunday demolished Prodest Hotel, Alode, and Edemete Hotel, Onne, for defying his executive order that all hotels in the state should remain closed during the Covid-19 pandemic. That was just a few hours after he declared Osaroejiji wanted for alleged criminal activities and placed a ransom of N5 million on him.

Gambari: A diplomat in the saddle