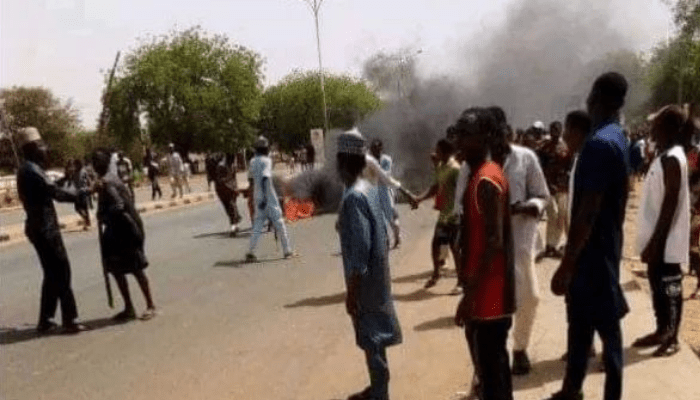 There is ongoing riot in parts of Sokoto state, after hundreds of youths on Saturday stormed major streets including the Palace of the Sultan of Sokoto, demanding the release of the alleged killers of Deborah Samuel.

The youths who were chanting “Allahu Akbar ” in a video that is circulating on social media, were seen destroying and setting some properties ablaze.

Deborah, a 200- level student of home economics at the Shehu Shagari College of Education, was stoned to death and burnt by her colleagues over alleged blasphemy. The police later announced the arrest of two suspects in connection to the incident.

But the news of the arrest did not go down well with youths in the state, in a video seen by BusinessDay, a visibly angry mob had attempted to attack the Palace but was resisted by security operatives.

Prior to the protest, an invitation was sent out by some youths, directing them to assemble for a peaceful protest starting from 9 am Saturday. The invitation which was circulated online read:
“We are calling on Muslims in Sokoto State to gather where there was a riot to save brethren in Islam that are battling the faith of Islam and upholding the respect of prophet of Allah S.A.W.”

Meanwhile, the governor of the State, Aminu Tambuwal, has declared a 24-hour curfew, with immediate effect in pursuance of peace and order in the entire state.

The curfew became necessary following growing tension created by the killing of Deborah according to a statement by the Special Adviser on Media and Publicity to the Governor, Mohammed Bello.

“Following the sad incident that happened at the Shehu Shagari College of Education on Thursday and sequel to the developments within (Sokoto) metropolis this morning till afternoon, by the powers conferred on me by sections 176(2) of the Constitution of the Federal Republic of Nigeria; and section 1 and 4 of the Public Order Act; and, also Section 15 of Sokoto State Peace Preservation Law, I hereby declare, with immediate effect, a curfew within (Sokoto) metropolis of Sokoto township for the next 24 hours,” the statement read.

Tambuwal, in a broadcast, called on the people to remain indoors as security operatives were being deployed to safeguard lives and properties.

The Governor further appealed to the people of the state to kindly continue to observe law and order and calm down the restiveness currently pervading the metropolis.

”Everyone should please, in the interest of peace, go back home and observe these measures, to reestablish peace, law and order in the state.

”It is not in the interest of anyone for us to have a breakdown of law and order. I, therefore, appeal for restraint and, for people to observe and respect the rule of law,” he said.