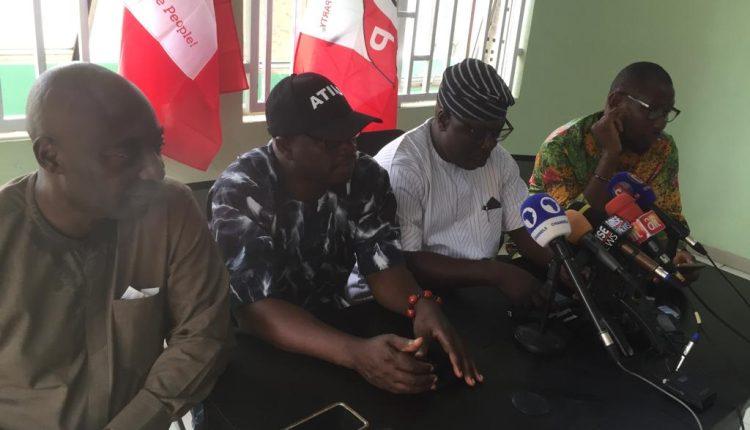 The crisis in the People’s Democratic Party (PDP) assumed a different dimension over the weekend, with the Southwest chapters of the party throwing its weight behind the embattled National Chairman of the party, Iyorchia Ayu, rejecting calls for his resignation.

The Southwest PDP also pledged to collectively support and work towards the victory of the party’s presidential candidate, Atiku Abubakar and his running mate, Governor Ifeanyi Okowa in the 2023 presidential poll.

This was disclosed by the Publicity Secretaries of PDP in Ondo, Osun, Ogun, Ekiti States in a briefing in Lagos on Saturday.

Kennedy Peretei, Publicity Secretary of the party in Ondo State, who addressed the media at the briefing said they stand with the PDP’s constitution which clearly stipulates procedure for leadership election and removal.

However, the Publicity Secretary of PDP in Oyo State was missing at the press conference.

The four PDP chapters support for Ayu is against the position of the Oyo State Governor and leader of the party in the region Seyi Makinde, who among other stakeholders in the region had demanded the resignation of Ayu, last week, after a meeting with Atiku during his visit to Oyo.

The crisis in the PDP started shortly after Nyesom Wike, the Rivers State Governor, lost the presidential ticket to Atiku.

The issue further aggravated when the Governor was snubbed by Atiku, preferring to pick Governor, Okowa as his running mate.

The decision was in disregard to the recommendation of Wike as running mate by the special PDP selection committee.

Wike has stated his demands for reconciliation, among which is the removal of the national chairman of the party.

Other leaders of the party in the region have said Ayu’s resignation was for the interest of equity, justice and fair play in the party.

But Ayu has vowed not to resign his position, insisting that his mandate was for four years.

Backing Ayu, the Southwest chapters said they do not see any justification for the resignation of the national chairman, at a time when the party was preparing for the general elections next year.

They stressed that Ayu was duly elected at a properly constituted national convention with a four years mandate and recently received a vote of confidence of the party’s National Executive Committee.

A statement to the media signed by the four Publicity Secretaries after the briefing read,” We wish to affirm our faithfulness to the PDP constitution which clearly stipulates procedure for leadership election and removal.

“As the only political party that has not changed name or logo since its establishment in 1998, the party cannot afford to appear unserious.

“We do not see any justification for the resignation of our National Chairman, especially at this very critical stage of preparation for elections.

“Iyorchia Ayu was duly elected at a properly constituted National Convention with a four year mandate and recently received a vote of confidence of the party’s National Executive Committee, at its 97th meeting in Abuja.

“Our party has championed the sanctity of the PDP constitution (2017 as amended). We must therefore do everything to maintain this sanctity.

“Any action that undermines the spirit of the party’s constitution at this crucial stage can only be considered as a deliberate attempt to sabotage the party’s efforts at winning in the coming general election.

“The concern of our zonal leaders and their determination to protect the interest of our members against any form of marginalization is deeply appreciated”.