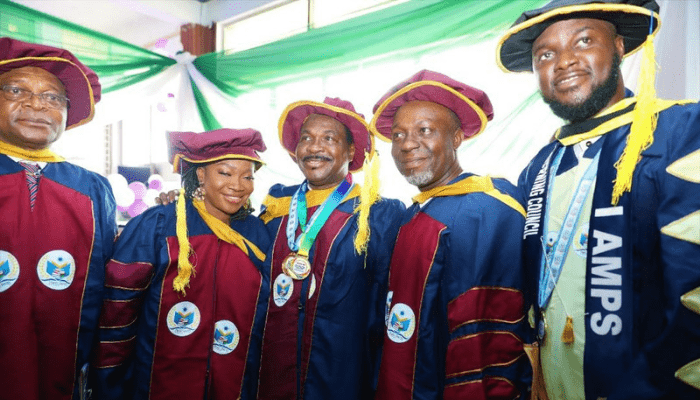 The event which was held recently at the University of Lagos campus, Akoka also recognised other top professionals, including popular human rights lawyer, Mike Ozekhome, who was awarded an honorary degree in International Law & Diplomacy.

Other outstanding Nigerians who were honoured at the event were Olufemi Bakre, MD/CEO, Parallex Bank Limited; Tolulope Latunji, Group Head, Marketing & Corporate Communications at United Capital PLC among others.

The institution explained that those awarded were chosen based on their outstanding leadership activities and for the mark they have made in leadership circles.

Onalaja was also, at the event, inducted as Fellow Institute of Arts Management and Professional Studies.

In his acceptance speech, the top real estate entrepreneur said he had rejected many honorary awards in the past, but accepted this one by Prowess University because the institution did due diligence.

Read also: 2022 Prestigious Hall of Fame Award: Those who made the list

“You did so much research on me personally and my business. You did your homework and it is evident that the degree from this institution is credible,” Onalaja said in appreciation of the recognition.

The theme of this year’s edition of the event was, ‘Sustaining the War on illicit Drug Trade in Africa Through Good Governance: Panacea for Sustainable Growth and Development in Nigeria.’

The event was powered by Leadtimes Africa Magazine in collaboration with other professional bodies including the Chartered Institute of Arts Professional (CIAP) USA and the International Institute of Strategic Development (IISD) in conjunction with Prowess University, Delaware, USA.

Onalaja and Ozekhome flanked by other awardees at the event