If you think getting a cheque every month for doing virtually nothing is daydreaming, you haven’t met a staff of any of Nigeria’s four government-owned refineries.

Every month, for the last three years, workers of the refineries have been paid N240.87 billion despite producing no refined product even as the refineries drain cash and incur huge losses.

Yet, one would think that abysmal performance is not a criterion for bumper pay but directors at Nigeria’s decrepit refineries are hurling home allowances that will make judges, doctors, and even some private business owners green with envy.

Due to the poor state of Nigeria’s refineries managed by the Nigerian National Petroleum Corporation (NNPC), Africa’s biggest oil producer imports nearly 90 percent of its refined product needs burns over N100 billion every month to subsidise petrol while paying a king’s ransom to keep the creaking refineries humming.

Despite producing zero fuel and recording a loss of N50.5 billion, the Port Harcourt refinery raised the payment made as salary and benefits for staff by 2.01 percent to N22.2 billion in 2019, from N21.76 billion the previous year.

Six directors collected N59.65 million in fees compared to N58.7 million received in 2018, meaning that each of them received an average payment of N9.94 million a month in 2019 from a company that recorded no revenue.

Total salaries received by the staff of Port Harcourt refinery between 2017 and 2019 amounted to N80.57 billion. But revenues received by the company within the period were estimated at N6.27 billion – implying that the NNPC sought N74.3 billion from outside the refinery to pay staff salaries. 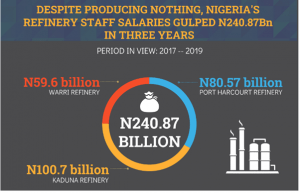 Despite incurring a loss of N65.9 billion, Kaduna Refinery also recorded a huge employee cost of N34.5 billion in 2019, which was an 11.5 percent decline compared to N39 billion recorded in 2018.

Ninety-four directors at the Kaduna Refinery received over N15 million each as salaries in 2019, which translates to a total of N1.4billion, despite the non-functionality of the refinery.

Total pay received by the staff of Kaduna refinery between 2017 and 2019 amounted to N100.7 billion. But revenues received by the company within the period were estimated at N2.57 billion – implying that the NNPC sought N98.1 billion from outside the refinery to pay staff salaries.

For the Warri Refinery, its audited account by Oguobi & Co and Ijebor+Ijebor, Chartered Accountants, showed that in two years, the directors collected N602 million, sharing N332.1 million as emoluments in 2019 and N270 million in 2018.

The Warri Refinery incurred operating expenses of N37.6 billion in 2019 compared to N34 billion in 2018. Details of the operating losses revealed the bulk of the expenses were on the welfare of the staff and remuneration of the directors.

About N955 million were spent on the directors’ remunerations from 2017 to 2019 while workers’ salaries, wages, and allowances gulped N39 billion within the same period.

Total salaries and pays received by the staff of Warri refinery between 2017 and 2019 amounted to N59.6 billion. But revenues received by the company within the period were estimated at N4 billion – implying that the NNPC sought N55 billion from outside the refinery to pay staff salaries.

A further review of the salary structure of NNPC’s refineries with losses showed most of the directors could be earning more than the President of Nigeria.

According to Revenue Mobilisation Allocation and Fiscal Commission (RMAFC), President Muhammadu Buhari receives a total salary package of N1.17 million monthly. This sum is inclusive of a basic monthly salary of N292, 892, a hardship allowance of N146, 446 monthly, and a consistency allowance of N732, 230 per month.

The annual pay of the Nigerian president and the vice president comes to N14 million and N12 million, respectively. Also, data from RMAFC showed the annual salary of the Chief Justice of Nigeria is N6.7 million.

The above development is a sharp contrast compared to directors in Nigeria’s obsolete refineries.

Compared to Kaduna Refinery, the highest-paid director went home with N33 million in 2018, although this dropped to N8 million in 2019.

Also, Warri refinery clearly stated that four of its directors in 2019 earned above N13 million the same amount earned in 2018.

In fact, in 2017 the highest-paid director at the refinery went home with over N80 million as emoluments despite losses recorded during the periods.

The Port Harcourt refinery is no different as four directors got at least N12 million and above as remuneration in the two years under review.

Rather than pump more cash into repairs and maintenance, some analysts say the ownership structure and business model of Nigeria’s refineries need to change.

“Irrespective of the billions of dollars pumped into Nigeria’s refineries, if the government still manages it, we would keep going in circles,” Joe Nwakwue, chairman of the Society of Petroleum Engineers (SPE) told BusinessDay.

Nigeria holds the 10th largest oil reserves in the world of 37 billion barrels and imports refined petrol while its creaking refineries perform less than 10 percent of their capacity on a good day.

One of South Korea’s major refineries is the Ulsan refinery which was established a year before Nigeria’s Port Harcourt refinery. It started operations with a 35,000bpd capacity; however, it has grown to be the third-largest refinery in the world, with a new capacity of 840,000 bpd.

Recall, NNPC is gambling $1.5 billion on the financially battered Port Harcourt Refinery, by signing a contract with an Italian firm Maire Tecnimont S.p.A for the rehabilitation of the inefficient refinery.

Rather than privatise the refinery, the NNPC has chosen to pump an equivalent of 4.5 percent of Nigeria’s 2021 budget into the refurbishment of a refinery that comprehensively lost N152.89 billion between 2017 and 2019.

Support for this report was provided by the Premium Times Centre for Investigative Journalism (PTCIJ) through its Natural Resource and Extractive Programme.