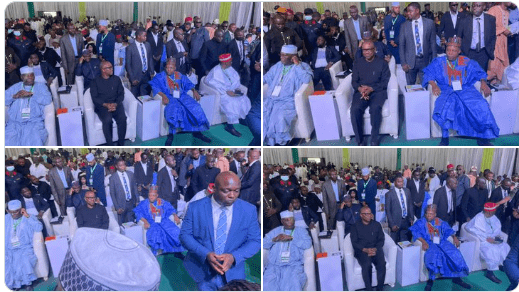 #WhereisTinubu is trending on social media. Bola Ahmed Tinubu, the presidential candidate of the APC was absent at the signing of the national peace accord on Thursday held in Abuja.

The hashtag #WhereisTinubu which has morphed into #whereisemilokan, has been tweeted over over 4000 times along with a trending topic Bola Ahmed Tinubu on Nigerian twitter which has seen over 21,000 tweets since the first hashtag started trending.

Some of the tweets came with photos of the peace accord with the APC candidate not in frame. Posters of missing persons containing pictures of Bola Ahmed Tinubu, circulated on social media, with different memes.

Aisha Yesufu, a prominent female activist with exactly 1.4 million followers on Twitter, tweeted, “My stance has never wavered and I pray to God it doesn’t. I am interested in Nigeria, not the leaders. They are there to serve us. Where is Tinubu trending? The same question I asked seven years ago of their then presidential candidate.’’

The running mate of the APC presidential aspirant, Kashim Ibrahim Shettima was present , including presidential candidates from different parties.

This has led to people asking “Who is APC Presidential Candidate?”

@Chimatybt, an aspiring data analyst tweeted “ Kashim Shettima again? Who is actually the presidential candidate of the APC? Where is Tinubu?”

Here are some other concerned Nigerians tweets.

In January 2015 I was asking where is Buhari and being attacked by Buharists and APC people. Today citizens are asking of the whereabouts of APC presidential candidate.
Osinbajo started the campaign in December 2014 while Buhari was no where to be found. https://t.co/iFgUPuLhac

Kashim Shettima again?
Who's actually the presidential candidate of the APC?

Let it be on record that your leader, Bola Ahmed Tinubu, who believes the office of President is his birthright, is intentionally absent from the symbolic Peace Accord signing ceremony of Presidential candidates in the forthcoming presidential elections. pic.twitter.com/wubV6Ycko2

If Bola Ahmed Tinubu can’t be present to sign the Peace Accord, he shouldn’t be on the ballot!!!!