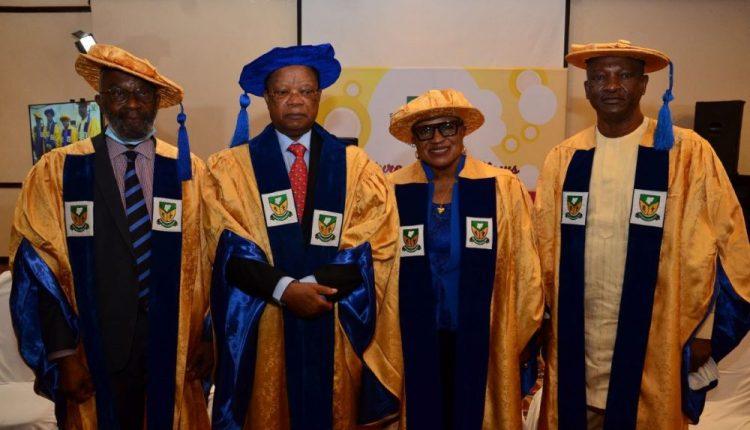 The Nigeria Academy of Pharmacy (NAPHARM) has admitted 15 new fellows and 10 life fellows into its academy, in an investiture ceremony held recently in Lagos.

The pharmacists inducted include accomplished teachers, researchers and industry practitioners.

In his opening remarks, Prince Julius Adelusi-Adeluyi, chairman of the occasion and President of NAPHARM, said that the newly inducted pharmacists, though drawn from a diverse array of disciplines, are united by the quest to propel mankind to new frontiers of wellness and good health, on the back of pharmacy and the pharmaceutical sciences.

Adelusi-Adeluyi in a statement said that one of the bedrocks of the academy is “using pharmaceutical research and development to break new grounds in human progress.”

“For which it employs “strategic advocacy and other means to increase government and societal support for scientific research and pharmaceutical research in particular.”

He noted further that in fulfilling the academy’s objective of ensuring that training of pharmacists in Nigeria continuously embodies global best practices, it has continued to make inputs in critical areas, in conjunction with Deans of Nigeria’s Pharmacy Schools, the National Universities Commission and the Pharmacists Council of Nigeria.

Speaking on the subject of the imperative of expanding the roles of pharmacists in the area of primary healthcare, Theresa Pounds, a clinical pharmacy teacher and practitioner, and president of the Nigerian Association of Pharmacists and Pharmaceutical Scientists in the Americas, decried Nigeria’s dismal health indices, adding that redressing some of the gaps in the country’s primary healthcare regime could help Nigeria to radically enhance these indices.

Pounds added that pharmacists are not only highly-trained, and often at huge cost to the state, but that in addition are the most accessible healthcare provider to the patient.

Drawing from her experience in other parts of the world, she added that community pharmacies could assist with such initiatives as vaccinations, family planning, health education, among many others, in so doing, complementing the efforts of other healthcare providers and institutions, many of which are over-stretched, in bringing healthcare to the doorsteps of Nigerians.

Speaking further, Pounds noted that many developed countries have continued to optimize the evolution of the roles of pharmacists with attendant benefits to their people as reflected in their health indices. Nigeria has an urgent need to do the same, she added.

Pounds also advocated multisectoral participation in health policy formulation and an increasingly positive attitude by health-functionaries towards teamwork in the health sector, adding that these would have very positive effects on the patient, who is ultimately the reason why all the different health disciplines exist.

Speaking in a similar vein, Mazi Sam Ohuabunwa, president, Pharmaceutical Society of Nigeria (PSN), commended the steady progress that continues to be recorded in the area of pharmacists becoming more integral to the country’s primary healthcare regime adding that more needed to be done.

“More integration of the different healthcare professionals in providing succour to the patient, he said, would not only have a salutary effect on universal health access for Nigerians but in addition, have a very positive impact on social and economic development,” he added, calling on health professionals to be more disposed towards collaboration.

The highpoint of the occasion was the investiture of the new fellows and life fellows of the Academy. Some of the new Fellows include John Alfa, chairman of the Governing Board of the Nigerian Institute of Pharmaceutical Research and Development, Ike Uzochukwu, director of research and innovation at Nnamdi Azikiwe University, Awka, Oluwatoyin Odeku of the University of Ibadan, and others.

Founded in 2014, the Nigeria Academy of Pharmacy seeks to, among other things, continuously contribute to efforts to enable Nigeria to advance universal health access.