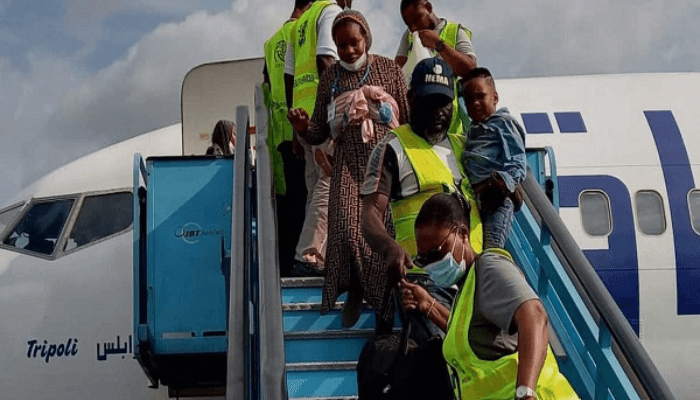 The National Emergency Management Agency(NEMA) today welcomed a fresh batch of 174 Nigerians from Libya at the cargo wing of the Murtala Muhammed International Airport.

According to Mustapha Habib Ahmed the director general of NEMA, the returnees who were stranded in the North African country were brought back aboard Al Buraq Air Boeing 737- 800.

Farinloye further added that the repatriation of stranded Nigerians in Libya was possible through the combined efforts of the International Organization for Migration(IOM) in collaboration with the European Union(EU) and a voluntary repatriation programme.

He also said that 23 of the returnees had minor medical cases.

‘‘This year alone, today’s flight makes the 12th recorded in Lagos that has brought returnees back,’’ Farinloye said.

He said that a total of 2,044 Nigerians have been assisted back to the country through Lagos since the beginning of 2022.

“We admonished the returnees on the need to realise that there’s no better country than Nigeria,’’ Farinloye told returnees.

“Here, you have all the freedom to achieve your potential; looking for greener pastures in foreign lands is no longer a reality; those countries are not better off when you consider the challenges you encounter there and here.”