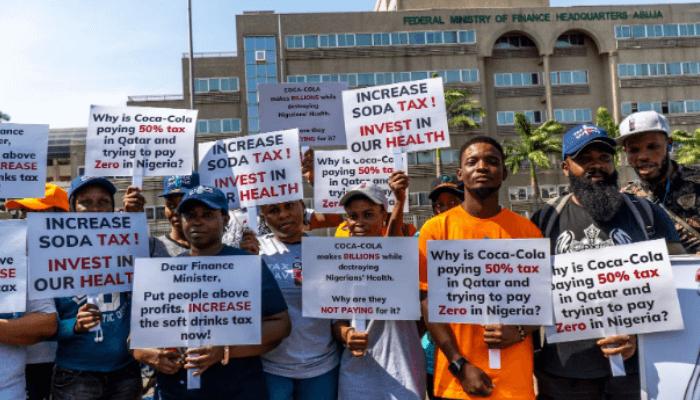 The National Action on Sugar Reduction (NASR) coalition has urged the federal government to increase taxes on sugary drinks and invest the revenue into public healthcare.

The call was made during a peaceful display in front of the Federal Ministry of Finance, Abuja. Last year, a 10 naira per litre excise tax on non-alcoholic, carbonated and sweetened beverages was passed through the 2021 Finance Act.

The coalition, while commending the Federal Government on passing the tax, maintained that a higher tax rate is needed to make a real health impact.

Omei Bongos-Ikwue, the coalition spokesperson, explained that the taxes would be especially beneficial to the poor, who suffer the most from the high financial cost of non-communicable diseases.

“The poor are most responsive to price changes,” she said, “and taxes will encourage them to buy less and prevent the future onset of costly, life-threatening chronic illness.”

She further explained that the billboard display was a means to drive public awareness about the importance of a sugar-sweetened beverage tax and the harms of consumption to health.

Through a lineup of billboard displays and placards, the coalition’s messages explained that soft drink taxes are a “win” for Nigerians.

The consumption of sugary drinks is known to be a risk factor for diseases like type 2 diabetes, heart disease, stroke and cancer. As one approach to relieve the burden on Nigeria’s over-stretched health systems, the taxes can lead people to buy and consume fewer soft drinks. This would result in reduced diabetes incidence, increased economic productivity, and lower healthcare costs.

The billboard displays also called out the beverage manufacturing industry for putting financial gain over health. The industry has consistently generated profits, yet makes claims that the current 10 naira per litre tax will “collapse” their industry.

Soft drink sales in Nigeria are the 4th highest in the world, with nearly 40 million litres sold each year. This amounts to billions in profit each year at the expense of public health.

The coalition further argued that the industry pays a 50 percent tax in Qatar, yet this high rate has not led to an industry collapse. Increasing taxes will benefit the nation’s health without causing economic losses to the industry.

“Soft drinks are cheap; diabetes is not,” read one of the billboard displays. Taxing soft drinks and other sweetened beverages is a way to prevent avoidable deaths and raise sorely needed revenue to invest in healthcare.