In its drive to improve revenue, the Nasarawa State Government has introduced four new strategies, including the use of Point of Sales (PoS) to track and improve revenue collection in the state.

The executive chairman, Internal Revenue Service (NSIRS), Ahmed Yakubu Muhammad, stated this at the launching of the strategies at the Government House in Lafia.

Muhammad pointed out the four new strategies introduced to includes, the introduction of new Point Of Sales (POS), stamps which are specialised to be used in the state, automation of the processes and procedures of collection of revenues from tricycles and other motorised vehicles used and introduction of a special plate.

He stated that several challenges hindering the efficient output of the board necessitated the need to introduce the new strategies so that revenue collection in the state can improve.

“Despite all the challenges, we have increased the monthly IGR from N500 million as at when we came in to N1.4 billion as at September this year,” he said. 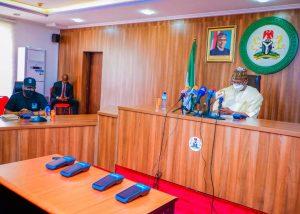 He appealed the state government to expedite approval of the board’s autonomy to enable it perform better in terms of revenue generation and running the activities of the board effectively.

Responding, Governor Abdullahi Sule, lauded the state revenue service for the introduction of the new strategies, and doing everything it can to improve the revenue generation of the state.

The governor urged the board to ensure that all proper trainings are conducted for officials of the NSIRS before they are released to the field to implement the new strategies introduced by the chairman.