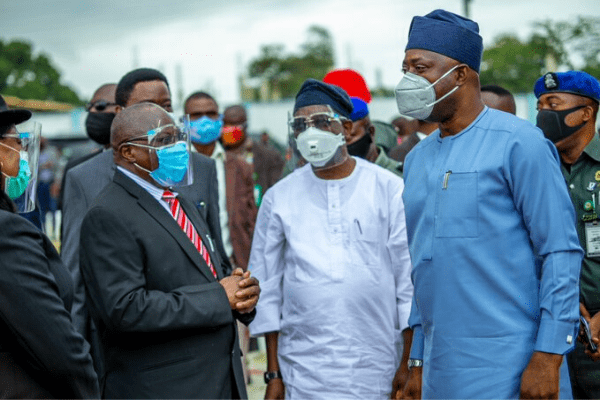 Governor Seyi Makinde has declared that his government will put in place stiff measures to curtail gender-based violence in the state.

Makinde, who stated this on Thursday, while commissioning the Family Court at the Iyaganku GRA, Ibadan, the state capital, pledged that the government would continue to maintain a cordial relationship with other arms of government for the overall benefit of the people of Oyo State.

He said that the Family Court was commissioned to deal with matters relating to Child Rights, marital issues, and other related matters in the state.

The governor said that the commissioning of the court was aimed at strengthening the laws around the Child Rights Acts, 2003 in the state, adding that though the act was domesticated in Oyo State in 2006, the architecture for its enforcement was not established.

He called on the people of Oyo State to contact the Oyo Ministry of Women Affairs’ Rapid Response Team (OYOMWA-RRT) if any child’s right is violated in the state.

According to him, today, we are here to commission the Family Court. You may recall that one of the points raised in our Roadmap to Accelerated Development in Oyo State, 2019-2023, is to play our part in strengthening the laws around the Child Rights Act, 2003.

“Although this act was domesticated in Oyo State in 2006, the court where this law was to be enforced was not established. We all know what happens when a law is made but the architecture for enforcement is non-existent.

“With the establishment of this court, the Ministry of Women Affairs and Social Inclusion will be better positioned to carry out its responsibilities. I will, therefore, want to use this opportunity to call on the good people of Oyo State to not hesitate to contact the Oyo Ministry of Women Affairs Rapid Response Team (OYOMWA-RRT) should they see any child’s rights being violated.

“Violation of a child’s rights will include all sorts of physical and emotional abuse. I can assure you that they will be swift in their response and they will make sure that the rights of that child are protected.

“Also, all other issues that directly impact the family and the child will be resolved in this court. So, I look forward to a continued cordial relationship with all arms of government for the overall benefit of the people of Oyo State. I, therefore, declare this Family Court open.”

“It is always a delight for me to be part of activities that show the collaboration between the three arms of government. Certainly, our growth as a people is strongly dependent on the synergy between the executive, judiciary, and legislature.”

He added that his administration has been able to achieve what it has achieved so far due to its ability to manage the little resources that accrued to the state in the last one year, and the fact that the government was able to block leakages and stealing of the resources of the state.

A statement by the Chief Press Secretary to the governor, Taiwo Adisa, quoted the governor as saying “actually, the Chief Judge thanked me because this project was made possible owing to the payment of their subventions. But I don’t think it was the payment of subvention that was enough to make this happen. Before now, from 2006, we had a Paris refund. We had excess crude at a point when our oil was selling for more than $100 per barrel and all the money came in. “So, it must have been the judicious management of the resources that led to this.

“We are faced with double jeopardy right now because we have the pandemic to deal with. At the same time, we have an economic meltdown. But if we manage the little resources that we have, we can do more. We are not magicians but what we have done basically is that we stopped the stealing of the resources of the state and now, we have more money to do what is necessary for the state.”

Earlier in his remarks, the Chief Judge of Oyo State, Justice Muntar Abimbola, said that the court will protect the child’s rights and afford the children the opportunity to seek enforcement of their fundamental human rights as recognized by the constitution.

He appreciated Governor Makinde for paying full outstanding pensions and gratuities of all retired Judges since 2013, noting that the governor also promised to pay retired workers their outstanding payment since 1999.

The Chief Judge hinted that the new Family Court is headed by Justice A.F.K. Adeeyo while the magistrates that will be working there will be S.H Adebisi and Sumbo Adetuyibi, adding that the court will commence sitting on Monday, July 13, 2020.

In their separate remarks, the Speaker of the Oyo State House of Assembly,  Adebo Ogundoyin, and the Attorney-General and Commissioner for Justice of Oyo State, Oyelowo Oyewo, a Professor appreciated Governor Seyi Makinde for running an all-inclusive government that allows other arms of government to work effectively.