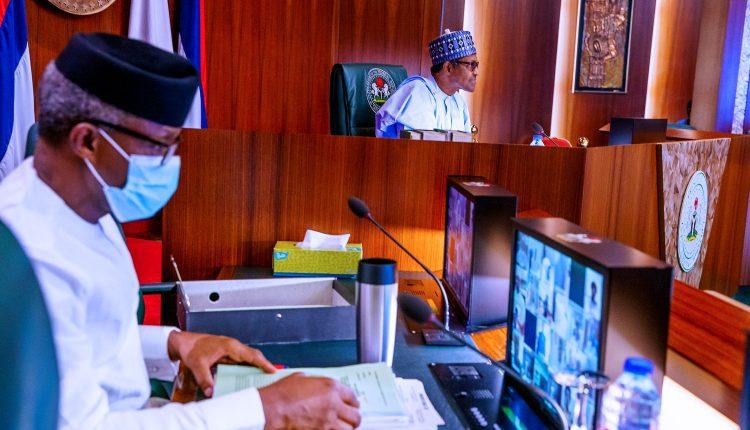 It’s a 2.3 Trillion Naira stimulus plan to support the Nigerian economy in the face of the disruptions and challenges of the Covid-19 pandemic.

Vice President Yemi Osinbajo while presenting the plan to President Buhari, had stated that it took into consideration several projections, including the severe downturn in the nation’s  oil earnings and  reduction in the amount available for allocation to the three tiers of Government.

He disclosed that unemployment  will rise to 33.6% or about 39.4 million people by the end of 2020, if the nation fails to take prompt pre-emptive measures and that millions more will fall into extreme poverty, before the pandemic ends, as well as the GDP may fall to between minus 4.40% and minus 8.91%, depending on the length of the lockdown period and strength of our economic response.

The Minister of Finance, Budget and National Planning, Zainab Ahmed, while briefing after the FEC meeting presided over by President Buhari, said the Council approved the report of the economic sustainability plan.

She said the committee is made up of a number of Cabinet Ministers, and held extensive consultations with National Assembly and the Economic Advisory Council (EAC), and State Governors.

The Goals of the NESP is to create jobs, put money into the economy, hopefully stop it from slipping into recession, support small businesses and prioritize local content (Made-in-Nigeria).

According to her, “the NESP is a 12-month ‘Transit’ Plan between the Economic Recovery and Growth Plan (ERGP) and the ERGP-successor-plan currently being worked upon.

She said: “The total package that we presented today is in the sum of N2.3 trillion, N500 billion of this is a stimulus package that is already provided for in the amended 2020 Appropriations Act. These are funds that we have sourced from special accounts. We also have N1.2 trillion of this funds to be sourced as structured low cost loans which are interventionist from the Central Bank of Nigeria as well as other development partners and institutions.

“We have N344 billion that will be sourced from bilateral and external sources and also additional funds that we can source locally.

“There is a strategy that has been adopted and this whole plan is to enable us respond to the triple problem of low exchange rate, youth unemployment as well as negative growth which is facing us now.

“The plan has to also support small businesses that have suffered severe impact of COVID-19 as a result of lockdowns. Specially, the hotel industry, private schools, restaurants as well as the transport sector have been very well impacted by this.

“We have also seen a significant impact on the poor and the vulnerable and even people that were okay as small traders, have been hard hit by stand still that we witnessed as a result of lockdowns.

“Council was able to take our reports and the interventions in the plan is that we prevent businesses from collapsing and also to infuse liquidity around the Nigerian economy, to create jobs using labour intensive methods such as agriculture, facility management, housing, construction, direct labour interventions that will create a lot of jobs very quickly.

“We had also proposed in the plan to undertake growth- enhancing jobs, creating infrastructure investments in roads, bridges, solar power, communications technology and several others.

“We have promoted in the plan manufacturing and local production at all levels, we are advocating for the use of made in Nigeria in all of these public works that we will be doing as a way of cresting jobs opportunities to enhance jobs sufficiency.

“So we expect for road construction for instance, we expect the minister of works not buy bitumen but to consider the use of gemstones and cement or other materials that can be used here, that way we converse our resources and will also be able to ignite other sectors within the economy.

She said the same thing apply to housing as well.

“The design is to have 300,000 houses built using standard designs that will be done by the ministry of works and housing but using strictly low cost materials. On the building sites, the plan is to have carpenters and others that will have multiplier effect on the economy.

The third pillar for us is to ensure rigorous implementation and this is important because this is a 12-month plan that is meant to pull our economy from sliding into a deep recession. It will also be a plan that will anchor to the successor period that we have already started working on.

It is a 12-month plan, a transit plan meant to be implemented quickly. To that effect, the federal executive council has agreed that the procurement processes become relaxed in a manner that we are adopting a faster mood as opposed to using the longer procurement process. With the National Assembly passing the budget, we have funding ready to go but we need procurement to be done quickly so that this money can be put to immediate use.”