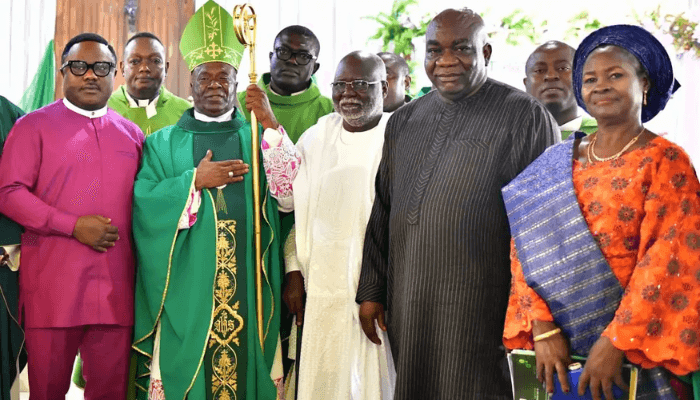 Bishop John Ebele Ayah stunned a Catholic congregation last weekend when he rejected an offer from Governor Ben Ayade of Cross River State, urging him to rather pay salaries of workers in the state.

A source told our correspondent that the governor was in the habit of making unfulfilled promises to churches and even the traditional institutions.

Ebebe is the metropolitan bishop of Uyo Diocese, who was invited for a thanksgiving mass for Justice Emmanuel Agim Akomaye’s elevation to the Supreme Court.

The holy mass held at St. Patrick Catholic Church, in Ikot Ansa, Calabar, the Cross River State capital, was organised by Obudu-Obanliku Elites Forum, in of honour Justice Agim, who hails from Obanliku, on his elevation to the Supreme Court.

The holy mass officiated by Bishop Ayah, also from Obanliku, coincided with the unveiling of the year’s harvest, themed, “harvest of divine intervention.”

Ayade, who was a guest at the event, made a donation of N25million on behalf of the state government, his family and the judiciary arm of the government. After the donation, the governor turned to the direction of the presiding bishop and said, “For our pride, the pride of Cross River North, the son of the soil, Bishop John Ayah, I will whisper my package to him later.”

Without wasting time, and as it is characteristic of the bishop, who is known for always speaking truth to power, Ayah rose up, collected the microphone and said; “I want to talk. The governor is my brother. We are both from Cross River North. I want to appreciate the governor and tell him to package whatever he has for me, add to it and use it to pay the salaries of the workers”.

Bishop Ayah’s reaction was greeted with a loud ovation and shout of “correct bishop God bless you” by the congregation.

And in defence of his earlier statement, Ayade collected the microphone immediately and said: “The salaries of the workers are already ready. Let me say this government has been faithful in paying salaries for seven years upward. The people will appreciate Ben Ayade when he leaves office.”