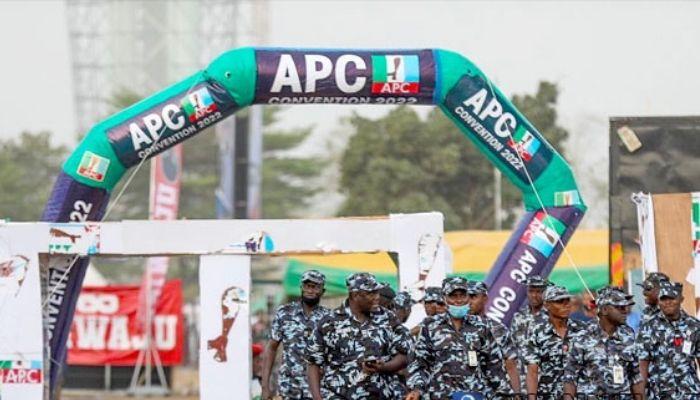 Accreditation of delegates to the All Progressives Congress (APC) 2022 National Convention has begun as delegates from across the federation thronged Eagle Square, venue of the convention amidst tight security.

The News Agency of Nigeria (NAN), reports that the New National Working Committee (NWC), members are expected to be elected at the convention to manage the party’s affairs for the next four years.

The party is currently being managed by a Caretaker and Extra-ordinary Convention Planning Committee (CECPC), headed by Gov. Mai Mala Buni of Yobe.

The Eagle Square, venue of the convention, located in the Central Business District, is already wearing a new look with different shades of decorations.

Petty traders are taking advantage of the large number of party faithful, both at the party secretariat and Eagle Square, to carry out brisk businesses as they hawk branded T-shirts, wrappers, hats, key holders, wristbands and other souvenirs.

Heavy security presence has also been noticed not just at the Eagle Square, but around the entrance to the venue.

Most hotels in Abuja city centre, and even in the satellite towns, have been fully booked as early as a week before the convention.

Meanwhile, traders have taken over all the roads leading to Eagle Square, venue of the All Progressives Congress (APC)National Convention holding on Saturday.

Correspondent of the News Agency of Nigeria (NAN), covering the event reports that the traders came from within FCT Abuja and other parts of the country.

It was also observed that the traders were making brisk businesses in various wares like clothing materials, sachet and bottled water, food items, foot wears and other consumables.

A food vendor, Halima Salisu told NAN: “We are here to show our support to the APC, as well as make some money from the sale of our food.

“The market has been moving fine, and so far, so good.”

A dealer of some clothing materials, Ilyasu Ibrahim, expressed delight that the event had provided them with a ”booming market.”

Hayatu Dallatu, a patron of one of the mobile restaurants near the Union Bank, commended the traders for coming to the rescue of the delegates, party supporters and the retinue of security agents at the venue.

NAN also observed the presence of operatives of various security agencies at the venue like the police, SSS, police bomb disposal units, NSCDC, and military, among others.

There are also various emergency services being provided at the venue like first aid and ambulance services.
Personnel of the Federal Roads Safety Commission (FRSC), were also seen manning the various roads and intersections around the venue.

NAN also reports that pickpockets and other hoodlums had infiltrated the Eagle square and its environs.
A truck load of some of them, who were apprehended by the police and NSCDC operatives, were seen being taken out of the venue through the presidential gate.

A cross section of the delegates and party supporters interviewed by NAN had expressed satisfaction with the security arrangements put in place at the venue.

“We are really optimistic that the APC National convention would be a huge success and at the end, the best will be victorious.”

Security agents have arrested three suspected pickpockets within the premises of the ongoing All Progressives Congress (APC) National Convention in Abuja, after they were caught snatching handsets at the gate.

A security agency who spoke on anonymous condition told the News Agency of Nigeria (NAN) on Saturday in Abuja, that the suspects took advantage of the commotion at the Eagle Square gate to snatch the mobile phones from their victims.

“The three of them are operating in a syndicate, snatching people’s mobile phones and money.

“They took advantage of the mad rush by delegates at the gate to snatch phones and money.

“What happened was that they didn’t know that we have stationed eagle-eyed policemen at the gate watching as delegates entered the venue.

“So that was exactly what happened, our officer caught them in action after they had snatched individuals’ mobile phones, ” he said.

The officer said that the suspects would be taken to the police headquarters for further investigation.