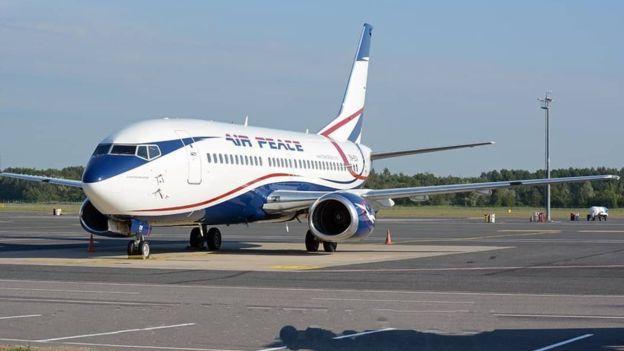 The Nigeria carrier was also the airline that evacuated Israelis living in Nigeria in late March and has been contacted by other countries for evacuation operations.

Spokesman of the airline, Stanley Olisa confirmed the successful flight and said Air Peace on Thursday, May 28, 2020, operated its second flight to China as “we evacuated 301 Chinese nationals back to their country. The flight departed the Murtala Muhammed International Airport Lagos at exactly 22:05hrs to Guangzhou Baiyun International Airport, China. Countries have been contacting us to evacuate their citizens.”

Air Peace said it deployed its Boeing 777 aircraft with the registration number 5N-BWI for the evacuation exercise.

Victoria Shin-Aba, the Regional Airport Manager, South West, Federal Airports Authority of Nigeria (FAAN),  said the flight: P47807 pushed back from the Echo terminal of MMIA at 21:40hrs with 325 souls onboard – 301 Chinese evacuees and 24 crewmembers.

She explained that all relevant government agencies like FAAN, Nigeria Immigration Service, Port Health Services officials and others were fully on ground to success of the evacuation exercise.

Air Peace is slated to carry out more evacuation operations for other nationals living in Nigeria, as the airline and other domestic operators gear up to resume scheduled flight operations soon.

There are indications that commercial flight operations would resume early June, as the Nigerian Civil Aviation Authority (NCAA) has started auditing airlines in preparation for scheduled passenger service.