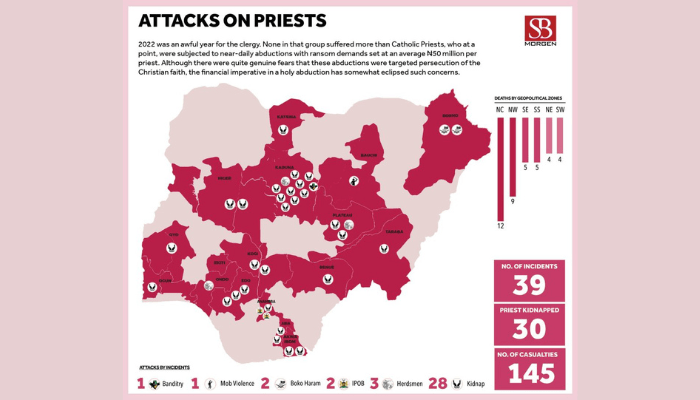 As insecurity continues to ravage Nigerian communities, there are indications that terrorists are now resorting to soft targets, with eyes on clerics.

Latest reports by SB Morgan Intelligence shows that no fewer than 39 Catholic priests were killed by gunmen, while 30 others were abducted in 2022, alone.

In the report titled “Attacks on Priests” published on Monday, the geopolitical research organisation said a total of 37 attacks on Catholic priests took place across the country last year. Out of the 37 attacks 145 casualties were recorded of which 39 were deaths, 30 were abductions.

Early this year, the Parish Priest of St Peter and Paul Catholic Church, Kafin-koro, Minna, Niger State, Father Isaac Achi, was killed by yet to be identified bandits. His death prompted the Pope to call for prayers over the many attacks on Christians in the country.

Prior to his death, Father Achi had served as the Parish Priest in charge of St. Theresa Catholic Church Madalla, were he escaped the Christmas Day bomb blast, in 2011.

BusinessDay gathered that he narrowly escaped that attacks, while his killers had since then placed him under their radar, before they finally killed him, mid January, this year.

In June, 2022, a Catholic Priest, Christopher Odia, of the Catholic Diocese of Auchi in Edo State, was abducted and killed by people suspected to be terrorists.

Borogo, 50, was killed on his farm along Kaduna-Kachia road

Read also: 2023: Insecurity could lead to cancellation/postponement of election in sufficient constituencies -BEI

The chancellor of the Catholic Diocese of Kaduna, Christian Emmanuel, while lamenting the incessant attacks on Catholic Priests, however, urged the Church and Christian Community in Nigeria to continue to pray for peace.

He described the attacks as an attempt to provoke religious crises in Nigeria.

The attacks on religious leaders, indicates that the terrorists are resorting to soft targets, as part of their very lucrative kidnap-for-ransom business which the federal government has demonstrated incapacity to address across the country.

In the same 2022, the Methodist Prelate, Samuel Kanu-Uche, Methodist Bishop of Owerri, Dennis Mark and the Prelate’s chaplain, were also kidnapped in similar circumstances along the Enugu to PortHarcourt road and were only released after a ransom of N100m was paid.

The SBM report also revealed that the north-central has been the worst hit, with 12 Priests killed during the period under review, while the north-west recorded nine deaths.

The organisation described year 2022, as “ an awful year for the clergy”, adding that “None in that group suffered more than Catholic priests, who at a point, were subjected to near-daily abductions with ransom demands set at an average of N50 million per priest”.

“Although there were quite genuine fears that these abductions were targeted persecution of the Christian faith, the financial imperative in a holy abduction has somewhat eclipsed such concerns,” the report read.

“While it may seem that the attacks have only become more prominent recently, they have been a matter of concern since the previous year.”

The Executive Director, Civil Society Legislative Advocacy Centre (CISLAC) Ibrahim Musa (Rafsanjani) berated the federal government for its inability to unravel the identity of those behind the killing of Catholic Priests and other religious leaders in the country.

He noted that it is either the government is overwhelmed, or someone in government is deliberately engaging in cover ups, by avoiding take appropriate actions due to the corruption in the security sector.

“By now, they should have mustered enough intelligence to expose those behind the killings.

According to Ibrahim, “ The failure of government to tackle the issue of killing of Priests has further contributed to emboldening other criminals in doing same

“ Those involved should be identified. They are not spirits but human beings. If the security system is proactive enough, they should have been able to unearth the killers by now.

He called for a new approach to tackling insecurity, as according to him, “ government has the responsibility to lead in dealing decisively with perpetrators of these atrocities which now serve as motivation for others to commit more crimes.