In what can be described as a show of unseriousness or nonchalance on the path of the Ministry for Trade, Investment and Industry, its official twitter account still carries Okechuchukwu Enelemah, as head of the ministry.

Also, the account portrays Aisha Abubakar as its Minister of State, despite almost 150 days since both Enelamah and Abubakar seized to be at the helms of affairs, after President Muhammadu Buhari in his second four years tenure, appointed Adeniyi Adebayo as the new head of the ministry.

There have also been no single tweets since September last year, of activities in the ministry from either the new minister or his assistant, making analysts and the investing public worry over whether Adebayo, the new Minister for Trade, Investment and Industry, has his eyes fixed on the sparrow.

One might ask do all this matter. Well, they matter because no other ministry should be more outward-facing than that of industry, trade and investment, said Olu Fasan, a London-based lawyer, political economist and a visiting fellow at the London School of Economics noted. 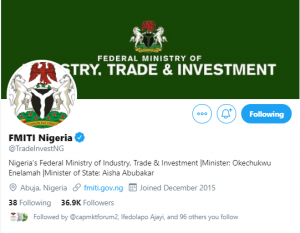 In an era where the internet and social media have increasingly become a major tool where the public search and get information’s, due to the increasing use of smartphone technology, twitter has been seen as one of the reliable ways by which people are informed.

Although Adebayo, 60, uses his twitter account in singing his praises and posting activities of the ministry, his account is however not a verified handle. Analysts say it can create an avenue for online fraudsters to use a tool to defraud or pass wrong information to the public.

“No responsible agency that knows what they are doing, ever joke with their official twitter account as the medium has proven to be one of the most reliable forms of engagement with the public,” a renowned political analyst told BusinessDay.

The ministry was not immediately available to comment as no valid phone number was made available on its site. Similarly, emails sent seeking the Ministry’s view was not responded to as at the time BusinessDay filed in this report.

President Muhammadu Buhari had in August last year, appointed Otunba Richard Adeniyi Adebayo, Minister of Industry, Trade and Investment, to steer the affairs of the Ministry for the next four years (2019-2023)

Like other critical agencies such as the Finance Ministry, the Ministry for Industry, trade and investment is an agency that is very critical at a time when Africa’s largest economy needs foreign investments to create jobs, reduce poverty, close income inequality gaps and achieve inclusive growth in an economy still healing from a recession that occurred in 2016.

It is expected that Otunba Adebayo, who is a legal practitioner, with a sound record of achievements as former governor of Ekiti State (1999 – 2003), would help in giving a facelift to the Nigerian investment landscape and building investors’ confidence that stood at $1.194 billion.