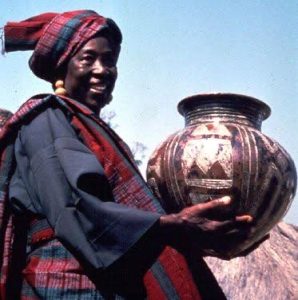 Ladi Kwali was born around 1925 to a family of potters in Kwali, Abuja, Nigeria. Her aunt taught her the coil and pinch methods of pottery during her childhood, which Kwali later refined into her own style as she fabricated everyday containers ornamented with animal iconography.

Local aristocrats soon showcased her masterful work as home decorations, and it was in a royal palace that Michael Cardew, the founder of Abuja’s first potter training facility, discovered her talent in 1950. 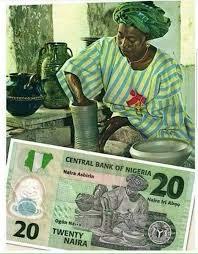 Kwali is always remembered with each exchange of Nigeria’s twenty Naira note, the first and only Nigerian currency to feature a woman. 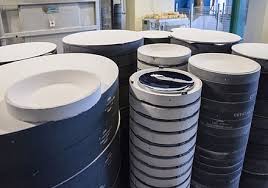 She became the first woman to be trained in wheel throwing, glazing, kiln firing, production of saggar and the use of slip. Acquiring new skills, Kwali combined the traditional art form with the modern to produce exquisite works that made her popular within and outside Nigeria. 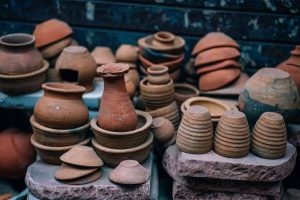 In 1954, Kwali joined the Abuja Pottery Center, where she made history as the first Nigerian woman to train in advanced pottery techniques. She fused her traditional style with these innovative methods to craft a hybrid collection of pottery stylized with zoomorphic illustrations.

Kwali continued to break the glass ceiling into the 60s with exhibitions across Europe and the Americas, achieving international acclaim. 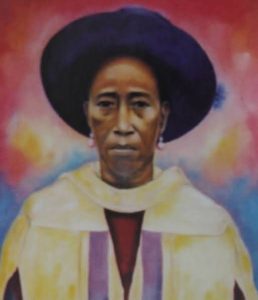 Later in her career, Kwali shared the secrets of her craft with the local community as a university lecturer. She received a doctorate from Ahmadu Bello University in 1977 and the Nigerian National Order of Merit Award in 1980, which is among the nation’s most distinguished academic awards, in honour of her contributions.

Kwali was awarded an MBE (Member of the Order of the British Empire) in 1963. In 1977, she was also awarded an honorary doctoral degree from Ahmadu Bello University in Zaria.

In 1980, the Nigerian Government (from the Cabinet Office of the Federal Republic of Nigeria) invested in her with the insignia of the Nigerian National Order of Merit Award (NNOM), the highest national honour for academic achievement.

Kwali was the pioneer of African ceramic art modernism. She gained international visibility and admiration through exhibitions and practical demonstrations arranged principally by M. Cardew. These exhibitions included London exhibitions at the Berkeley Galleries in 1958, 1959 and 1962.

Ladi Kwali gained recognition for her works in Europe, Britain and America. Locally, her works were displayed during Nigeria’s independence celebration in 1960.