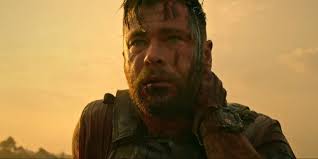 The action movie started from start to finish, this was really good and almost exhausting, but you will love every bit of the suspense, race, action and killing, if you haven’t got the mindset and strength of loads of killing, shooting and deaths, then maybe this isn’t really for you, but if you can handle loads and loads of blood, then bravo you are sure going to have an exciting time with this new movie on Netflix, well for me I love action movies despite the fact that I really don’t have the heart and love to shout, but this was super exciting and thrilling, one of those movies that keep your heart rate bumping from start to finish, I had so much fun watching this movie and I am sure you will too, it kind of reminded me of “John Wick 3”, that same feeling and excitement and one that leaves you hanging at the end if this is the end or there is more to expect, trust me it was an exciting movie.

Tyler Rake played the lead role and the entire movie was really around him and Jake’s son. Tyler was a very strong and courageous black mercenary who was contracted for a deadly job of extracting the kidnapped son of an imprisoned international crime and drug baron. He was a very strong man in his city, but had to leave his son with one of his trusted men to look after his son till he got out of jail. One day his son gets kidnapped and Tyler is asked to do the dirty job of bringing him out alive from the deadliest rival gang that wanted to cause him pain. Tyler was absolutely amazing and fantastic, he did the job with so much charisma and courage, he wanted to make sure that nothing happened to the boy and they left the city alive, what started as easy and almost a piece of cake turned out looking like war, Tyler had to face almost 500 bad guys or more, shooting and stabbing all as they came, they kept running for almost 3 days till they got to the final bridge that would take them out of that city.
Do not take your eyes off the screen for one minute or else you miss it and don’t get the entire movie again, the best part of this movie was the last scene of escaping from one end of the bridge to the other to where his true freedom lied, he had a helicopter and the fathers team members waiting for him to take him to safety, Tyler and Jakes son had already created a bond and an allegiance, which was so strong, that Tyler promised that he won’t leave him until he was safe, you need to watch the entire movie to see how it spanned off.

I totally enjoyed this action packed movie called Extraction and I was glad I made out time to see it, I would score this movie 8.5/10 because Tyler was phenomenal in his acting and he made everything look so real, he brought the entire movie to life one would think that he was untouchable, the photography, cinematography, sound track, storyline, script, editing and the entire twist was so good, you would feel so bad when the movie was brought to a halt, I wanted it to go on and on, but then they had to end, this was a fantastic movie, I must say and I would be recommending it to the action movie lovers, thumbs up to the editor and writer, they did put out a very good show and the very end was one that leaves you speechless and confused, wondering okay so what’s next, brilliant movie I must say and it was worth my time.