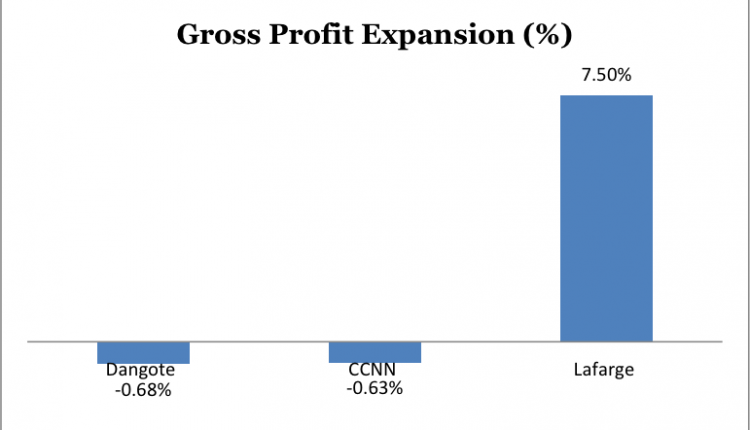 Lafarge Africa Plc has used its materials and labor to produce and sell products profitably more than peers, as cement makers are poised to take advantage of government capital expenditure spend to bolster earnings.

The gross profit ratio is important because it shows management and investors how profitable the core business activities are without taking into consideration the indirect costs.

In other words, it shows how efficiently a company can produce and sell its products. This gives investors a key insight into how healthy the company actually is.

Lafarge Africa has spent less on input cost to produce each unit of product as its cost of sales ratio declined, while peer rivals saw this ratio spike.

Lafarge Africa’s impressive margin expansion amid a tough and unpredictable macroeconomic environment can be largely attributed to an excellent energy mix.

Hitherto, the company used gas to power plant at the factories, but it now uses coal, a cheaper source of energy. It has substituted imported coal which was relatively expensive and susceptible to foreign exchange risk, with locally sourced coal.

Lafarge shares have been appreciating since the start of the year as it has a year to date (YTD) return of 12.45 percent, even amid a stock market rout.

Dangote Cement, Lafarge Africa, and CCNN have a combined N356.90 billion in cash from operating activities as they have spent N21.61 on the acquisition of property and plant and equipment.

Dangote, Nigeria’s biggest listed company with operations in 10 African countries is investing heavily in markets including Tanzania and the Democratic Republic of Congo and has earmarked $350m for capital projects this year.

In Nigeria, the company is building export facilities to boost shipments to West African neighbours.

Lafarge Africa bought a plant in Calabar, in south-eastern Nigeria, that can produce 5million tons of cement a year as it seeks to increase capacity to 17.5million tons from 14million tons.

FG commits to promoting equality, inclusiveness in power, other sectors

GTBank generates higher returns to shareholders than any lender

For the poor to survive the coronavirus pandemic, keep money circulating

GTBank generates higher returns to shareholders than any…