While fixed-income investors in Nigeria have been searching for high-yielding securities in light of the country’s high inflation rate, their peers in Ghana are earning rates that are higher than the return on fixed deposit accounts.

The average T-bills rate in the Gold Coast country stood at 14.26 percent as of April 19 2021, 3.26 percentage points higher than the country’s estimated 11 percent on fixed deposit accounts.

Compared to the 9.75 percent reported for Nigeria’s 364-day Federal Government short-term T-bill in April, the average return on Ghana’s treasury bills is higher by 4.51 percentage points.

Data compiled from the Bank of Ghana (BoG) shows that the interest rate on the country’s 91-day T-bill stood at 12.79 percent while the 182-day and 364-day bills stood at 13.54 percent and 16.45 percent, respectively.
Analysis of the real return on the country’s shorter 91-day and 182-day bills shows that inflation-adjusted return stood at 2.49 percent and 3.24 percent, respectively.

When the same adjustment was done for Nigeria’s 91-day and 182-day bills, the real return was -16.17 percent and -14.67 percent, respectively. Nigeria’s stop rates for the 91-day and 182-day bills remained sticky for the fifth consecutive auction to April 29 2021. The 364-day bill, however, increased by 75 basis points compared to the 9 percent reported in the previous auction.

In Nigeria, Africa’s largest economy, limited attractive instruments and the policy by the central bank, which prevents domestic investors from participating in its open market operations (OMO) auction sent yields to its low record. Although there has been a recent uptick in T-bills rates.

As the interest rate is trying to play catch up, inflation is moving upward too, Yinka Ademuwagun, investment management analyst at ValuAlliance Asset Mgt said.
“The real return is still clearly negative because inflation is rising faster,” Ademuwagun said.

However, the recent uptick in the yields on Nigeria’s short-term government instrument is helping to comfort investors against the rate at which the high inflation rate is impacting their returns.

“While the rising inflation has broadened negative real return, it is comforting to know that yield on fixed income instruments is also on the rise, which will bridge this gap,” Ayodeji Ebo, head, retail investment, Chapel Hill Denham, said. 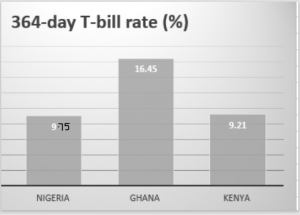 After hitting a four-year low of near-zero percent in 2020, yields on the Federal Government risk-free treasury bills climbed to more than 17 month-high, as compiled from Nigerian Treasury bills primary market auction Results for April 29, 2021.

Market analysts link the increase in the stop rates to the hike in CBN’s OMO rates some weeks ago. Investors are bidding at higher rates and the Debt Management Office (DMO) also needs to raise the cut-off rate to fill some of the orders, an analyst noted.
Weeks after the CBN shocked the market with a 10.10 percent stop rate for the 362-day OMO bill, the highest levels seen in almost a year, fixed-income investors demanded higher rates for T-bills.

While the CBN planned to raise N11.39 billion for the shorter 91-day bill, investors were willing to subscribe with N10.53 million. The apex bank was eventually able to allot N7.19 billion, N4.2 billion less than its initial offer.

Investors were willing to bid with N9.1billion for the N6.0 billion offered for the 182-day bill. The apex bank eventually raised the initial 6.0 billion it offered to investors.

Though the recent uptick in T-bills rate to more than one year-high is good news for fixed income investors whose real return appreciated to -8.42 percent in April from -9.33 percent in March, the expected high inflation rate remains a challenge.

Even though a BusinessDay poll of five market analysts expect the rates on the less risky government Nigerian treasury bills to reach 14 percent this year, the country’s inflation rate, which is expected to maintain an upward trend, means investors are unlikely to get a real positive return this year.
Ebo said he expects inflation to rise further in the coming months as the downside risk of fuel subsidy removal remained.

“The question is, as annual inflation moves above 18 percent, can one year (364-day) T-bills go as high 18-19 percent?” Ademuwagun asked.

Nigeria’s rising cost of goods and services, which does not have relief in sight, puts the country’s local investors investing in government instrument at a disadvantage when compared with their African peers.

With 9.213 percent T-bill rates in Kenya, fixed-income investors in the country are enjoying a real return of 3.31 percent. March inflation in East Africa’s largest economy stood at 5.9 percent.

While interest rates in Nigeria have always been high due to the monetary system in vogue since 2009, which sought to use FGN bonds/T-bills and OMO bills as a means of attracting US dollars into the country to stabilise the naira, but October 23, 2019, OMO policy by the central bank, which prevents domestic investors from participating in the auction, drove rates to its record low levels.

From October 23, 2019, the apex bank banned non-bank locals (individuals and corporates) from participating in OMO auction at both the primary and secondary market. The CBN’s policy is largely in line with its drive to divert liquidity away from risk-free instruments to the real sector.
T-bills are short-term sovereign debt securities maturing in one year or less. They are sold at a discount and redeemed at par.

According to the FMDQ, the bills are by nature, the most liquid money market securities and are backed by the guarantee of the Federal Government of a nation.

The Federal Government of Nigeria, through the CBN, issues Nigerian Treasury Bills to provide short-term funding for government budget deficit. The T-bills are usually issued through a competitive bidding process, quoted and traded on FMDQ’s platform.

10 major risks for companies in Nigeria, global economy in 2022