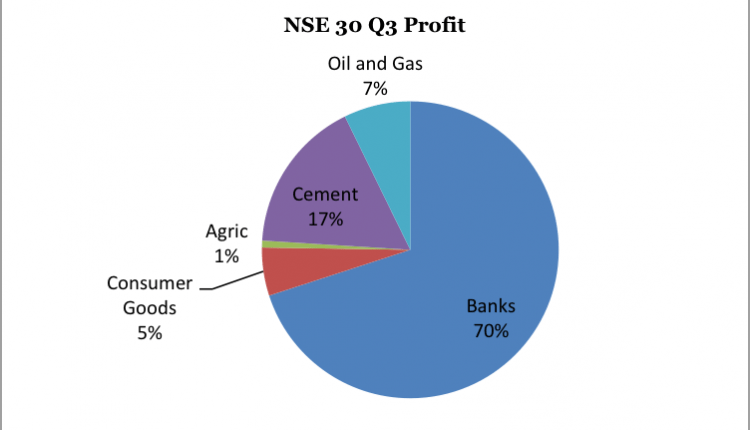 Banks have continued to grab the lion share of Nigerian Stock Exchange (NSE) 30 index profit, while consumer goods firms are the worst performers among the most liquid companies on the bourse.

The exchange comprise of the most liquid firms on the bourse.

Deposit Money Banks have benefitted from a high yield environment and they always take advantage of monetary policies to underpin earnings.

Between 2014 and 2016, gains from foreign exchange transaction added impetus to earnings, thanks to the devaluation of the currency that ballooned dollar denominated assets.

The combined net incomes of NSE 30 firms increased by 13.34 percent as at September 2019, but investors have dumped shares due to lack of policy direction on the part of government.

The growth was largely underpinned by a combined 12.14 percent, 18.24 percent, and 40.722 percent uptick in the cumulative bottom lines (profit) of the Banks, cement makers, and the oil and gas sectors to N731.18 billion, N174.13 billion, and N75.85 billion respectively, according to data compiled by BusinessDay.

Nigerian corporate earnings might have recorded an even stronger growth in the third quarter but the consumer goods firms were a drag on the list.

“High unemployment and low consumer demand is hurting many businesses. The banks have benefited from the favourable yield environment but the new central bank rules on Loans to Deposits (LDR) could result in deteriorating asset quality,” said Johnson Chukwu, managing director and CEO of Cowry Asset Management Ltd.

Deteriorating consumer purchasing power, hike in petrol price, and decrepit infrastructure that has made it practically difficult for companies to transport their goods to the factory warehouse, is largely responsible for a 21.54 percent drop in the cumulative net income of fast moving consumer goods firms.

International Breweries and Pz Cussons are the only firms to record a loss among the NSE 30 firms, and analysts see a bleak future for the sector as federal government has hiked Value Added Tax (VAT) to 7.50 percent from 5.0 percent.

Profit margins of consumer goods are thinning as costs spike and revenue grows at a slow pace.

Cumulative net margins for the sector fell to 5.79 percent in September 2019 from 10.54 percent the previous year.

“Our overall outlook for the consumer goods sector in Q4-19 is not overly positive due to myriads of macro bottlenecks that continue to weigh on operating performance,” said Yinka Ademuwagun, equity analyst with United Capital Ltd.

The third quarter GDP figures released by the National Bureau of Statistics (NBS) showed Trade – which contributes c 15.2 percent to the overall GDP, recorded its second consecutive contraction, down by 1.5 percent.

Analysts are of the view that the increasingly deteriorating margins of Nigeria corporates could result in an economic downturn if the fundamental fail to improve in the near term.

Between 2009 and 2014 a total of 322 organised private sector companies have closed shop, citing the harsh business environment, according to a World Bank Enterprise Survey.

The report also said that out of 5833 firms sampled in the country within the period, at least, 1136 were reported to be at the risk of closing down.

They added that the present border closure is hurting companies who are unable to ship products in and out of the country.

“As long as the macroeconomic outlook is not impressive, investors will not invest their money no matter how cheap the stocks are,” said Kayode Tinuoye, head of portfolio management at United Capital Ltd.

“Government is yet to carry out reforms that will help jump start the market, and hike in Value added Tax (VAT) has further damped consumer spending,” said Tinuoye.

Nigerian stocks have been relatively cheap, but investors’ apathy towards the equities market continues.

Following close of Friday’s trading session, the Nigerian equities market traded at a P/E ratio of 7.09 x, according to data from gathered from Bloomberg.

The market did not react to the positive earnings due to weak market sentiments, according to Ayodeji Ebo, managing director/CEO of Afrinvest Securities Ltd.

“Stocks should improve on the back of lower yield in the fixed income market as investors crave for stocks that have good history of dividend,” said Ebo. 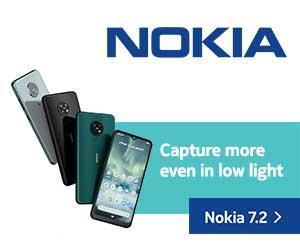 Investment sentiment for consumer goods stock may not…