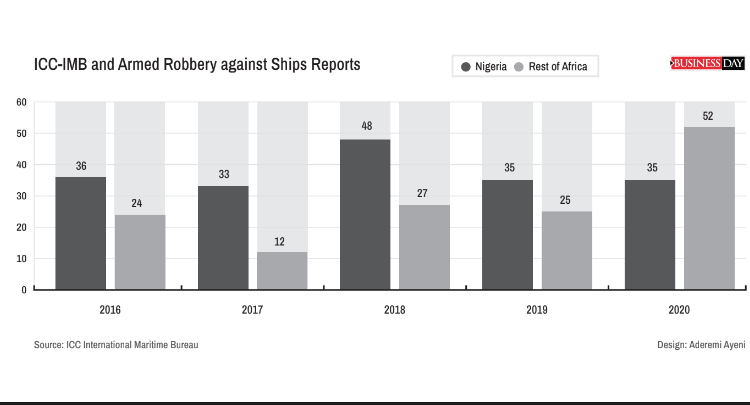 Nigeria has recorded the highest number of piracy attacks than the rest of Africa combined within the last four years, an annual report by the ICC International Maritime Bureau (IMB) has shown.

The report which was published in December 2020 indicates that armed robbery and piracy attacks in Nigeria doubled between 2016 and 2020 than several countries in Africa including Somalia, Ghana, Mozambique, Congo and the Democratic Republic of Congo (DRC).

The ICC International Maritime Bureau is a specialised division of the International Chamber of Commerce. The ICC was established in 1981 to act as a focal point in the fight against all forms of maritime crimes and malpractices.

The report emerged as a result of outrages in the shipping industry at the alarming growth of piracy across the world which prompted the creation of IMB reporting centre in 1992 in Malaysia.

The report showed a worrying rise in piracy and armed robbery on the world’s sea from 2017 to 2020. Attacks on vessels so far in 2020 were fairly evenly split between tankers, bulk carriers, container ships, and other types of vessels.

Reacting to the development, a security analyst and maritime lawyer, John Ananaba (SAN), said Nigeria government must take deliberate action to revamp the economy, create jobs, and enact enabling laws to discourage crime and deal with the situation.

“But if we must follow the Somalia example where piracy was high but now low, we have to revamp the economy, create jobs so we can isolate criminals and prosecute them as unemployment is high,” Ananaba said.

He lamented that the situation had escalated in recent years with little effort to tackle it, urging the government to act fast to avoid the country being avoided by ship owners and importers.

According to him, “The world was focused on Somalia before foreigners began to avoid them because their water was not safe and they were regarded as a failed state. The situation went down here when there was amnesty for the Niger Delta people militants. But it is up now you can see what is happening all across the country.

“Many ship owners would not allow their ships to come to Nigeria. We have navy people to protect the water but are they doing this? If this continues companies would rather divert their imports to neighbouring countries and you can imagine the effect of that on our economy and market. The prices of goods would be up.

“So, the government has to strengthen the laws, the economy has to be strengthened to avoid crimes”.

But Confident McHarry, a security analyst, said the Nigeria government had not shown political will to implement policies to ensure maritime security over the years, adding that the trend may be difficult to tackle without dealing with high unemployment in the country.

“We need to find the political will to implement policies that ensure maritime security. The Deep Blue project is one key policy that was designed since 2016 to protect the waterways but several delays that have prevented its launch shows where maritime security is on the list of the government’s priorities.

“The country first needs to take its unemployment figures seriously. The countries worst affected by sea piracy have unemployment problems among the worst states in the south. There’s a need to get the teeming youth population into active labour,” McHarry said.