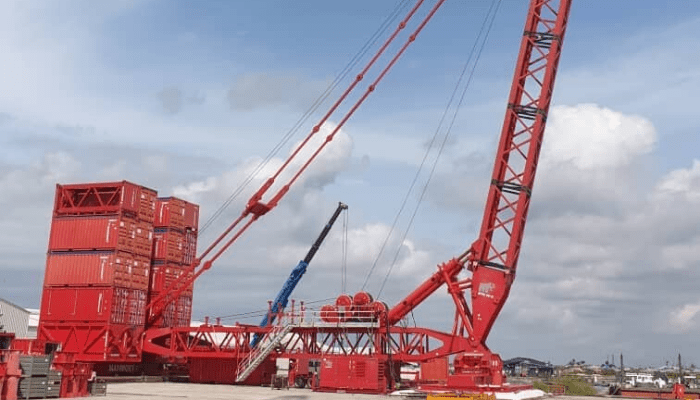 The strategic partnership signed earlier in January 2020 between Lagos Deep Offshore Logistics (LADOL) Base and Mammoet, which resulted in the installation of the heavy lifting terminal crane – MTC 15, has started yielding fruit as the installed crane has fully becomes operational at LADOL Free Trade Zone.

Installed at the LADOL quayside in May 2020, the crane is now the biggest installed shore crane of its kind in the region and it has turned LADOL’s quayside into a heavy lift terminal. To support LADOL’s quayside operations, Mammoet had earlier in the year, mobilised a 250-ton crawler crane in addition to the MTC-15. ​

Consequently, LADOL based has now gained the capacity to handle project cargo and other logistics jobs for industrial sectors in West Africa using Mammoet’s crane fleet and heavy lifting expertise along with project management services to provide clients with more comprehensive and cost-effective solutions.​

With a load moment matching a 1,200 ton crawler crane or a large floating sheerleg, the crane enables loads up to 600 tons to be lifted to and from the quay from non-geared cargo vessels. This lifting capacity is ideal for loading and offloading heavy items such as columns, vessels, reels, engines, and many other project cargoes. ​

Jide Jadesimi, executive director, Business Development of LADOL, said the establishment of a long-term relationship between Mammoet and LADOL is an extremely exciting and significant development in terms of increasing local capacity.

“This will attract general fabrication and complex construction projects, which are increasing in frequency across West African sub-region, to Nigeria,” he said.

He described the installation process as a combination of teamwork, and dedication from LADOL and Mammoet staff.​

“It was with great excitement that the MTC-15 arrived at LADOL in sections as a Meccano. LADOL and Mammoet personnel worked together and assembled the crane at the quayside,” he said. ​

​​According to him, this was no simple task because it required precision in connecting and assembling each component but with the assistance of cranes, forklifts and a team of dedicated personnel, the MTC-15 was assembled in no time.

​“LADOL’s business is driven by the United Nations Sustainable Development Goals and this partnership with Mammoet is in line with this dedication – bringing more partnerships, jobs, education and prosperity to Nigeria by taking Nigeria one step closer to being the industrial hub for Africa,” he added. ​

Michel Bunnik, commercial director of Mammoet Middle East and Africa, said the combination of Mammoet’s MTC crane and LADOL’s excellent infrastructure such as 200 meter quay with 8.5 meters draft, warehousing, fabrication and assembly yards, LADOL base can now be considered as a fully independent heavy lifting terminal.

“LADOL base can support the largest industrial projects in the world, solving cargo handling and logistics challenges of project owners, EPCs and freight forwarders, as they can get heavier things in and out of Lagos more efficiently than they could before,” Bunnik said.

​He however described the MTC-15 crane as the ideal for loading and offloading heavy break bulk cargo, without having to reinforce the quay, making it possible to bypass other Apapa quays and to transport the cargo as well as materials directly to sites; this saving a considerable amount of time and resources.