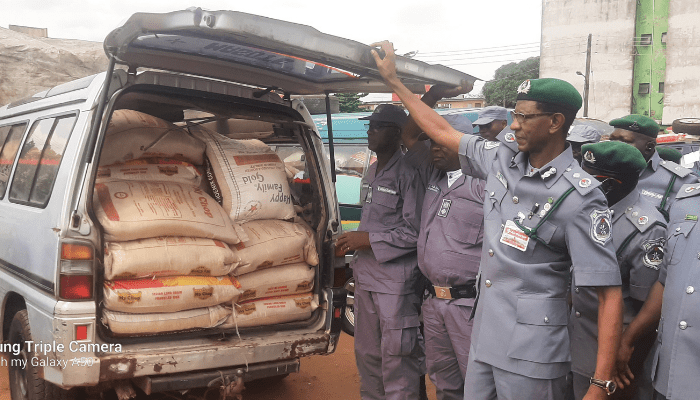 The Nigeria Customs Service (NCS), Federal Operations Unit (FOU) Zone A, said it has intercepted 42 drums of calcium carbide smuggled into the country from Benin Republic.

In addition, the unit also seized contraband worth over N3.1billion, and raised Demand Notice (DN) worth N242 million.

Security experts have warned that if calcium carbide get into the hand of criminals, it can be used as explosives to bring down a building especially when some chemical components are added to it.

Usman Yahaya, acting Customs Area Controller of the unit, who disclosed this, said that the explosives were smuggled into the country through the porous borders under the Ogun State command of the service.

“We intercepted the 42 drums of calcium carbide through intelligence gathering. The contrabands were in a truck and concealed with cassava tubers and flakes. They thought with the concealment, they can evade the eagle eye of our officers,” Yahaya explained.

According to him, those explosives were intercepted at Sango-Ota axis, and they were coming from Benin Republic through the unapproved routes.

“Calcium carbide is on the list of contrabands because it is dangerous to the nation if it gets to the hands of bad elements. We have setup investigative team to know where the explosives are headed but sure it was meant for a dangerous adventure,” he added.

While noting that the calcium carbide weighs about 106KG in 42 drums with a Duty Paid Value (DPV) of N105 million, he said that smugglers have no good intention because if they did, they wouldn’t have concealed and smuggled the items through the border.

“Everyone should be worried about smuggling because it begets unemployment, drug addiction, criminality, proliferating of light and small arms, substandard goods, and others,” he said.

The CAC said the unit also intercepted 1,488 kegs (equivalent of 33,000 litres) of Petroleum Motor Spirit (PMS) set to be smuggled out of the country to neighboring Benin Republic.

According to him, other seizures include bags of rice, Indian hemp, textiles material, cartons of tramadol, second hand clothing among others.

Others are 77 cartons of tin tomatoes; 2,843.6 kg of Indian Hemp; 877 bundles of printed wax/textile materials; 29 different brands of used vehicles; 2,969 cartons of Eva soap; 42 drums of calcium carbide (explosives); 549 cartons of Tramadol and 12 units of used motorcycles with DPV of N 3.1billion.